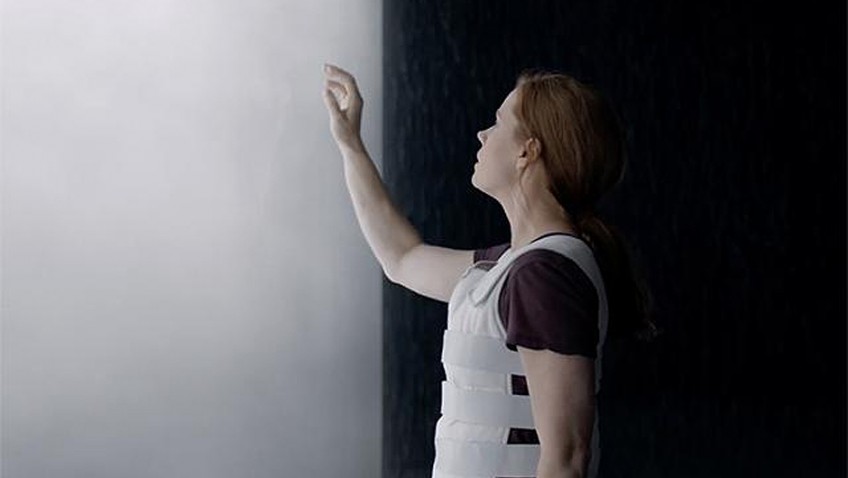 A superior, if flawed Sci-Fi film that makes semantics fascinating

After his powerful, nail-biting thriller, Sicario and this week’s acclaimed Sci-Fi alien invasion movie, Arrival, Canadian Denis Villeneuve is the hottest director around. Adapted by Eric Heisserer from Ted Chiang’s intriguing story, ‘Story of Your Life’, Arrival is indeed a good film, but it is not great, nor is it suspenseful. What makes it worth seeing is not only Amy Adams’ convincing performance (with Nocturnal Animals out this week, Adams is on a roll). Arrival asks, and even partly answers, the intriguing question, ‘how do we communicate with creatures who might not even have a language?’ In Arrival, Villeneuve renders semantics cinematic and the challenge of communicating with aliens, fascinating. Memory doesn’t work like I thought it did,’ a woman’s soft voice chants over a montage; we’re still bound by time.’ The montage is of a woman with her baby daughter, and then with the baby, now older, playing in a garden by a big lake. ‘I remember moments in the middle… and this was the end come back to me…Now I’m not sure I believe in beginnings or endings.’ We deduce that the woman’s teenage daughter dies of cancer. Cut to this woman some time later (or is it?). Dr Louise Banks is lecturing on the Portuguese language in the middle ages when a student asks her to turn on the news and no one can quite believe it.

Dr Banks drives home to a minimalist wood and glass modern house on a lake (someday a graduate film student ought to do a thesis about films with lakefront homes) and listens to the news: ‘…Twelve unidentified objects across the globe in random locations…’

Shortly thereafter, US military Colonel Weber (Forest Whitaker) pays Dr Banks a visit to enlist her help with an urgent mission. As we later learn, the US wants to translate the creatures’ language before other countries do and, perhaps jump to dangerous conclusions that could affect the planet.

Fortunately, Louise did some translation work for the military not long ago and still has security clearance. Weber plays her a tape of the creatures’ communication and asks her how she would go about translating that. She says that she could not begin to understand how they communicate without seeing the creatures and interacting with them. Reluctantly, Weber agrees.

Dr Banks is flown to a sprawling, bustling field station of temporary dormitories and laboratories below a giant hovering peapod that is the space craft. It is an impressively atmospheric and slightly unreal setting that puts us right there with the characters. Dr Banks is introduced to mathematician and physicist Ian Donnelly (Jeremy Renner, The Hurt Locker) whose skills will complement Dr Banks’.

Together they enter the pod in protective suits and oxygen helmets. When we eventually see the creatures emerge from clouds behind a huge plate glass window, we see three slimy things with a black giraffes’ necks each stuck into a huge black, wrinkly hand with five fingers. Their language is called Heptapod B to reflect this. What is so refreshing about Arrival is that the film shows Banks actually working very hard to accomplish her task, the results of which we see the following day when she tries something new, presenting the creatures with a large whiteboard on which she writes the word ‘HUMAN’ and points to herself. When they respond with their ‘hands’, Banks puts her hand up against the pane separating them (a division which is rather artificial and contrived). Gradually Banks feels more comfortable with the animals and her protect gear comes off much to the horror of the military around her.

But this closeness is bringing back haunting memories for Banks, notably of her daughter and their back story. We learn that Banks’ husband was a scientist when her daughter asks for help with her homework and her mother suggests she asks her father. We also understand he abandoned them over a ‘disease.’

While Donnelly and Banks progress with the aliens, who project a huge visual display of their language on the panel, external forces, notably the US Army and the Chinese, are threatening this progress. Donnelly then has a eureka moment when he realises the meaning of the aliens’ message. Alas, it involves cooperation between countries at a time when each country has cut off communication, each having chosen to interpret the aliens in a different, often belligerent manner.

Acting on her own initiative, Banks makes contact with the aliens and is finally given a gift of their whole language. This enables her to understand that the ‘weapon’ they mentioned is in fact memory.

To say any more would be a spoiler, but suffice it to say, some will like the handling of the memory and time aspect of the story better than others. And although you can’t fault the spacecraft and the military set up, the best you can say about the depiction of the creatures is that it’s bizarre and underwhelming.

It is probably not a spoiler to point out that at the end of the film, love blossoms between Banks and Donnelly who are both conveniently single. This is somewhat surprising given the absence of any chemistry between the actors or the characters. If you regret that the great actor Forest Whitaker is so underutilised, save a thought for Jeremy Renner. Despite being given his eureka moment, Renner has such an underwritten role that you almost forget he’s there.