Home / LIFESTYLE / REVIEWS > / FILM REVIEWS / If you don’t mind being conned, you’ll have a blast 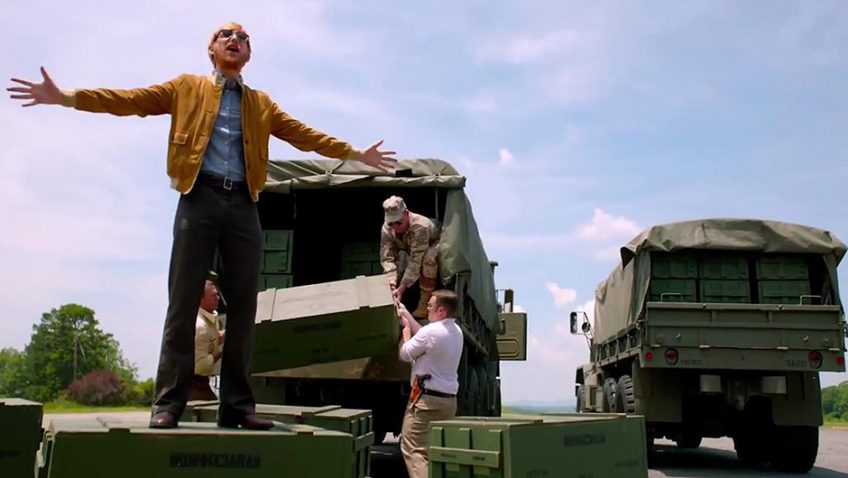 If you don’t mind being conned, you’ll have a blast

There is a hint as to why Tom Cruise squeezed American Made into his busy schedule ahead of Mission Impossible 6.   Everything went wrong for Adler Berriman ‘Barry’ Seal, the real life character he portrays in Doug Liman’s (The Wall, Edge of Tomorrow) madcap, colourful, adventure movie, in 1986.  And 1986 was the year in which everything went right for Tom Cruise with the release of Top Gun. There’s more than coincidence and nostalgia in his decision however.  As in Top Gun, Cruise who is not only a pilot himself but a stunt pilot, gets to dawn his aviation glasses and play with a lot of planes once again. Cruise shines as a greedy, brazen Forrest Gump, the man who seems to pop up at major world events without being aware of the context. As he breaks the fourth wall by addressing the viewer, Seal is clearly proud of the fact that he has become the man you call when you want things ‘dropped off and picked up.’ By that he means a safe pair of hands as a cocaine smuggler for the Medellin Cartel; an informer for the DEA, and an arms smuggler in Oliver North’s Iran-Contra scandal that rocked the Reagan administration. When the shit hits the fan, however, as it does increasingly frequently for this man with nerves of steel, Seal will sheepishly confess in his understated manner, ‘maybe I should have asked a few more questions.’

His model-looking wife Lucy (Sarah Wright) learns the hard way that she should have asked some more questions. But with two kids and another on the way, when Barry wakes her up and tells her they have to move to Mena, Arkansas by sunrise, it’s better not to know why.   Somehow, without her knowledge, her husband has gone from being a trusted TWA pilot to a CIA covert operative whose family home in Baton Rouge Louisiana, is about to be raided.

That is the premise of a film which is branded ‘based on a true story.’ We all accept that Gary Spinelli’s script will be as fictionalised as a host of other ‘based on true story’ movies about con men or ordinary guys who get in over their heads when their get-rich-quick plans are so successful that they attract the attention of  organisations like the CIA. Tom Cruise and Sarah Wright in American Made

In addition to American Hustle and the Wolf of Wall Street, there was 2016’s Gold, loosely based on the Bre-X mining company scandal in which a down-and-out miner’s son masterminds a get-rich-quick scam that fooled Wall Street. Then there was War Dogs, based on the true story of two young Florida friends who win a legitimate $300 million contract to arm American allies in Afghanistan – and then turn greedy.  In all of these films, it’s a thankless task unpicking the fact from the fiction. The appeal of all of these movies is when these guys find themselves life’s lottery winners with more money than they know what to do with.  In American Made, even after building an enormous mansion and buying Lucy a sports car, poor Seal has so much cash that he runs out of holes in his garden to stash it in.

But there is also something odd about Tom Cruise playing Barry Seal. Seal was a minor character in the 2016 biopic of US Customs and Drug Enforcement Agent Robert Mazur, The Infiltrator, based on Mazur’s book,  The Infiltrator: My Secret Life Inside the Dirty Banks Behind Pablo Escobar’s Medellin Cartel.   Mazur’s life, fairly accurately dramatised in the film, is no less incredible than Seal’s, but Mazur has the moral high ground at all times. Seal never does.

In reality Barry Seal, who was hired as an aviation engineer and then as a pilot for TWA in 1968, was a man with a good job who got bored, or greedy, or both and became a drug smuggler and a money launderer.  When he was caught, tried and sentenced to ten years, he approached the DEA with a deal to reduce his ten year prison sentence.  He offered to inform on the Medellin cartel and later, still has part of his plea bargain, flew planes in which CIA cameras were installed to implicate the Sandinista (Communist) government in Nicaragua in the drug smuggling business.

In the film he is never sentenced to prison and approaches no one. He is approached by CIA agent Monty Schafer (Domhnall Gleeson, wonderful) whose withholding of his salary drives him into the arms of the drug cartels.

Only audiences over the age of 50 will have any idea what the Iran-Contra scandal is or who Oliver North was, so not everyone will share the joke when Seal is whisked away to the White House.  An elated Seal turns to the audience, once again to announce that he now works for the White House.  The idea behind all these asides is to acknowledge the surreal absurdity of the real life government actions in which Seal was a fortunate pawn.

However, Seal finally becomes aware that he is playing a dangerous game.  The CIA’s sting operation was designed to catch the top Colombian drug barons, Pablo Escobar and Jorge Ochoa Vasquez, on camera, loading cocaine onto Seal’s plane.  Unfortunately, the photos captured Seal, too, and they were leaked.  His old pals Jorge and Pablo (who at one point paid Seal half a million dollars a flight for his services) are not the type to let that go unnoticed.

In the film, Tom Cruise needs to have us on his side, and, as an international movie star tightly linked with the dodgy world of Scientology, it helps to have a bit of the moral high ground.  So he portrays Seal as a victim of corrupt employers and as a naughty boy whose crime was to be too good at what he did and to want too much for his family. That men in power like Oliver North and possibly Ronald Reagan were corrupt con men is supposed to make Barry Seal a little less of a morally bankrupt criminal.  Liman and Cruise have to convince us that Seal is no more than an all-American product of his times – that he is ‘American Made.’

Once you agree to suspend disbelief, you will have as much fun watching this unabashed star vehicle as Cruise had making it.  Cruise swaggers, glistens with sweat, and gives us his big white smile (he has a front tooth knocked out in one scene that has been replaced good as new in the next).  And he dazzles us as his own stunt pilot, just as Barry Seal dazzled the DEA and the Colombians with his daring airborne feats.  That’s no con.