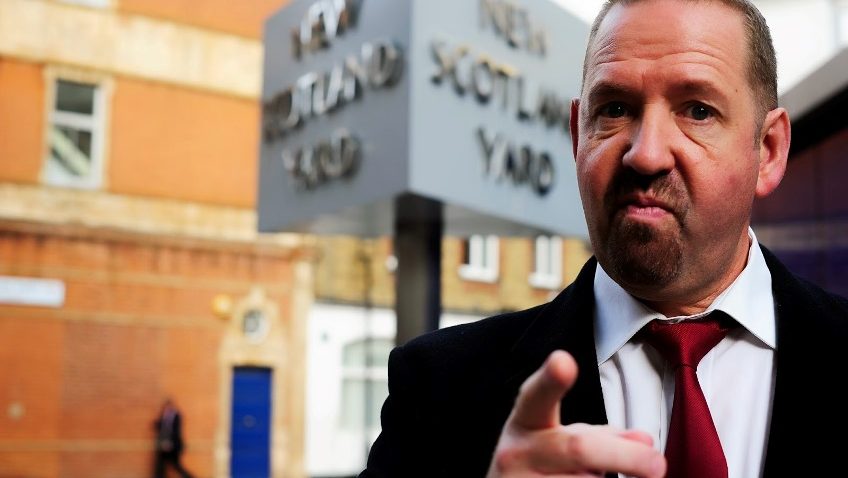 For twenty years or so Alfie Moore was in the Humberside Police Force, fighting crime, facing tough challenges, being in Scunthorpe, and rising to the rank of sergeant. This, it turns out, was the best thing he could ever have done in preparing himself for a whole new career, a career as… a stand-up comedian. This unique combination results in intelligent, thought-provoking comedy at its most hilarious and most delightful.

With tours everywhere on hold, Sheffield-born Alfie’s latest sell-out gig, Fair Cop Unleashed, is being rescheduled. Five series, though, have been recorded for Radio 4. Alfie’s arresting delivery, natural tone, witty quips and good-humoured ad-libs are so thoroughly engaging, so endlessly funny that, even as a disembodied voice, his charisma shines through as bright and colourful as a twirling blue light.

Each cleverly crafted, well-paced episode is based around a different, policing dilemma that Moore has met with in real life. As the story unfolds, the audience is frequently called upon to participate, their interactions with affable Alfie adding hugely to the hilarity. Right hands raised, the audience is sworn in early on to act as audience cops, repeating: I do solemnly swear and affirm to be a fair cop. At each turn in the case, Alfie asks their thoughts, views and reasoning, offering combinations of hands-up votes, suggestions and multi-choice answers. What would they have done at this point, had they been in the policeman’s shoes? What would you have done? What decision would they, or you, have made? Why?

Fascinating insights into police procedures and finicky legal details emerge, making the show usefully informative, too. Even as you’re laughing, you’re learning, and you’re being repeatedly surprised and amazed. Often the audience members themselves with their unexpected comments and thought processes are a source of surprise and amazement, too, stimulating spontaneous, witty ad-libs from Moore in a manner reminiscent of another wonderfully funny Radio 4 show, Mark Steel’s In Town.

From traffic collisions to garden sheds; from ASBO moped rider to Lady Godiva and Peeping Tom’s voyeuristic bent; from informants and babysitters to spliffs, hedges and missing garden gnomes it turns out that no police matter is ever as clear-cut as you might expect. Yet once it’s given the Alfie Moore treatment, each turns out to be hilariously funny. Even from dark places light-hearted humour can emerge, and jokes and anecdotes crop up all along the way.

Since the real life outcomes and actual decisions that were made are revealed only gradually there’s also a slight element of suspense running through each episode, the final piece slotting into place only right at the end. And Alfie’s rich supply of tip-top material seems to be endless – thank goodness.

After the radio broadcast, series are initially available on BBC Sounds. Earlier series of It’s A Fair Cop can be found as Audiobook and audio downloads. Image by Tony Briggs.