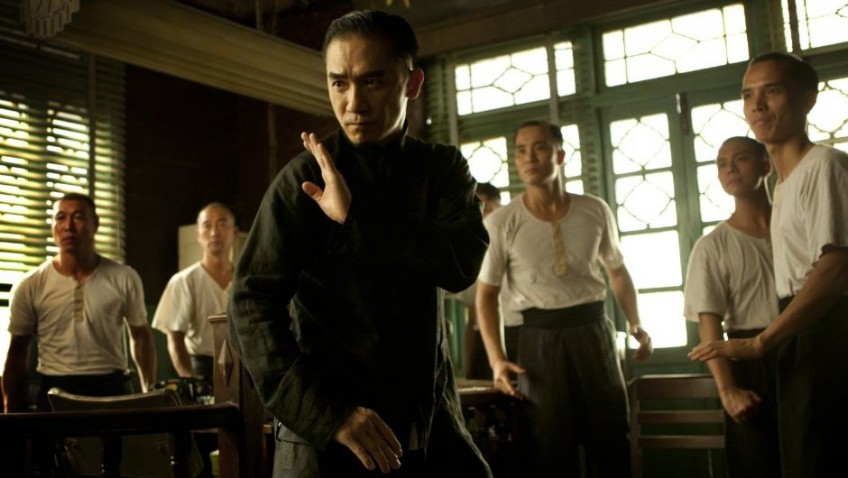 An identity crisis in The Grandmaster

When a new Wong Kar-wai film comes out, the art house crowd takes notice. Kar-Wai is the auteur of the stylishly shot, beautifully made, internationally-accessible Chungking Express, Happy Together and In the Mood for Love, all films about problematic relationships set in a well-defined socio/historic context.

Now Tony Leung, who won the Best Actor Award at the 2000 Cannes Film Festival for his role in In the Mood for Love, is back in The Grandmaster, a biopic of the grandmaster of the Wing Chun School of Kung Fu, Ip Man, who taught Bruce Lee.  Despite some brilliant moments and rich cinematography from Philippe Le Sourd, the Grandmaster is let down by a weak narrative as the film grapples with an identity crisis.

Grandmaster begins in 1933 when Ip Man (Leung), is 40. “If life is a season, my first forty years were spring,’ he tells us. What follows is autumn and winter. The retiring grandmaster of Northern China, Gong Yutian (Wang Qingxiang), has appointed his favourite, Ma San (Zhang Jin) as his heir, and has come to Ip Man’s town, Fushan, to appoint a Grandmaster for the South.  Can anyone beat Ma San? Eventually, the Southern contingent proposes Ip Man who must go up against the elderly Gong Yutian.  Instead of fighting, Yutian asks Ip Man a philosophical riddle, which he answers correctly.

Gong Yutian’s daughter, Gong Er (Zhang Ziyi, Jen Yu in Crouching Tiger, Hidden Dragon), who has been trained by her father, objects to this new Grandmaster and challenges him to a dual. Because Kung Fu is about prevision, they agree that the opponent who breaks anything in the ornate building loses.  Ip Man loses when, to save Gong Er from falling, he breaks a step at the end of the fight.  But the chemistry established in their confrontation remains strong and Gong Er has a newfound respect for Ip Man.

The remainder of the film is a rushed journey through history, not only Ip Man’s, but Gong Er’s.  They communicate or meet at various intervals.  often seems that this is more Gong Er’s tragic story than Ip Man’s.

Ip Man’s family suffers during the Sino-Japanese wars and one of his two children die (in reality, he had eight children many of whom died), and then when the Communists take over.  Ip Man had served as a policeman and a member of the Nationalist Kuomintang party and might have been engaged in anti-Communist espionage, although the film does not get into that detail.

Eventually, Ip Man escapes to Hong Kong where he sets up a Kung Fu school but the Chinese close the border before he can bring his family over.  Business is not good as many other teachers have rushed to Hong Kong during the Communist take over of China to set up their own schools.

In Hong Kong, in 1950, he meets up with Gong Er, whose life story we have also followed.   Ip Man learns that it is too late for love between them because, to save her father’s honour after Ma San betrayed them ten year’s earlier, she has vowed never to marry. In a fight, which we see in flashback, Gong Er suffers physically and starts taking opium for the pain.

In fact, it was Ip Man who became an opium user, but this is not mentioned in the film, nor is Ip Man’s family, who disappear in the second half of the film. In fact, he brought them over to Hong Kong, but they returned to Foshan in the late 1950s as his wife, who shortly thereafter died of cancer, did not like Hong Kong.

Ip Man then had a child (not mentioned in the film) with his new mistress.   Two of his sons fled persecution in Communist China and fled to Hong Kong to be with Ip Man. Both of his sons taught Kung Fu in Hong Kong and one served as a consultant in several cheaper biopics of Ip Man.

What begins as an interesting overview of the Chinese martial arts movement in 20th Century China becomes a doomed love story and a fictitious biopic not just of Ip Man but of his fictitious love interest, Gong Er.  Gong Er’s tragic, though fictitious story is the more interesting of the two, as she is an unmarried woman putting family honour above personal happiness.  Even the average martial arts fan, however, might be disappointed.

The martial arts sequences, choreographed by Yuen Wo Ping (The Matrix, Kill Bill, Crouching Tiger, Hidden Dragon) are masterful, and no doubt accurate, but are difficult to follow because you cannot always see what is happening.  Moreover, with the exception of Gong Er and Ma San’s confrontation, they are not fights, but skill testing exercises that the untaught viewer has no means of judging.