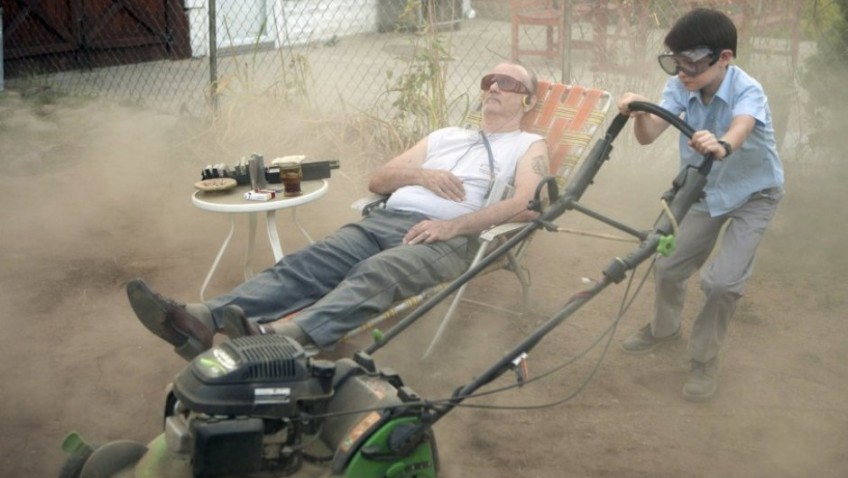 The story of a cantankerous, chain smoking, hard drinking 60-something who becomes a mentor to a lonely, bullied young boy is a familiar premise that remains precisely that in Writer/Director Ted Melfi’s blatantly obvious St Vincent.

Since older viewers are accustomed to mentoring young people, this Bill Murray vehicle could have been a big draw for the over 50’s market; but older audiences, too, have a schmaltz threshold.

While we can enjoy the delightful performances from 64-year-old Bill Murray, Melissa McCarthy, and newcomer Jaeden Lieberher, St Vincent patronises its audiences, as a formulaic, sentimental vehicle for an actor in search of an Academy Award.

Vincent is a retired war veteran who instead of doing something productive with his retirement, drinks heavily and gambles, presumably to pay for the services of his regular ‘lady of the night’, Daka Paramova (Naomi Watts, miscast with a silly Eastern European accent).

When single mother Maggie (McCarthy) moves in next door, her demanding job as a radiologist leads to her son Oliver (talented Jaeden Lieberher) being locked out of the house after school.

Vincent reluctantly takes Oliver in and, when he finds he quite enjoys Oliver’s company, he negotiates a fee for child-minding.  Naturally, the day Vincent takes Oliver to the race track, they win.

In a lame sub-plot that is left dangling, Vincent sneaks off without loan-shark Terrence Howard (The Butler) noticing his windfall.  The lonely man and the lonely boy bond in a way that Oliver was never allowed to with his father (who, interestingly, isn’t as bad as Maggie makes him out to be).

Because Vincent is the eponymous Saint of the film, the money Vincent so desperately seeks cannot be destined to feed his addictions and vices. And sure enough, we learn that Vincent has a wife hidden away in an expensive nursing home.   Although she looks great and younger than Vincent, his wife has Alzheimer’s – the best way for a modern scriptwriter to get rid of an inconvenient spouse since cancer or the overused heart attack.

That being said, no formulaic film with an over-60 would be complete without a stroke.  When Vincent succumbs, newly pregnant Daka becomes his live in nurse, too pregnant, although surprisingly, not too old, to retain her pole-dancing job.  Maggie, who is, coincidentally, Vincent’s radiologist, also helps out, as does Oliver.

The grizzled pariah becomes everyone’s concern. Since the film has a 12A rating and an Oscar in its sights, just before the birth of what we assume is Vincent’s baby, news comes that the wife has died. Phew!

In the record six months it takes Vincent from being unable to speak and walk, to full reinstatement, little Oliver has to prepare his ‘My Modern Day Saint’ speech for his Catholic School teacher, Brother Geraghty’s (Irish comic actor Chris O’Dowd), class.   It comes as no surprise that Oliver chooses Vincent.

The town where Vincent and Oliver live must have the highest standard of living in the world, not only for its medical marvels, but for its teaching standards. Oliver’s eloquent Modern Day Saint speech sounds remarkably like a Hollywood script-writer telling the audience exactly what he’s been showing us for the preceding 90 minutes.