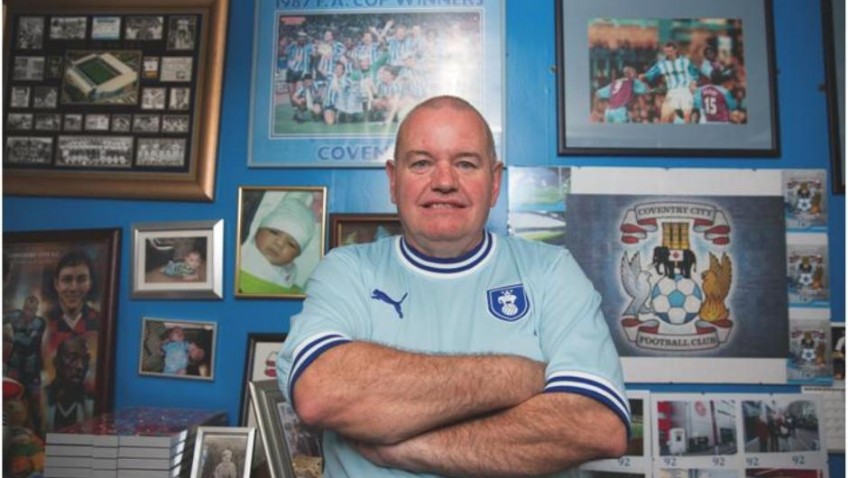 Britain’s most dedicated football fan John Leekey has completed a 50 year quest to watch a staggering 1,200 games at every single league ground in England.

Incredibly, footie-mad John, 64, has seen the Sky Blues at 83 out of the 92 grounds. It is believed no other fan has seen one team play at as many different stadiums.

The dedicated dad-of-two has travelled tens of thousands of miles since his first trip to a league ground to watch Coventry play Wolverhampton Wanderers in 1967.

Since then he has spent countless hours making his way around the country following his club as they made their way up through the divisions.

And John celebrated crossing off his final ground when he visited Fleetwood Town on March 17 but says he has no plans to stop there.

The elite Ninety-Two Club recognises supporters who have visited all 92 league stadiums and has strict entry requirements.

But super-fan John, who lives with his wife Faye, 59, in Nuneaton, Warks., said in total he has now been to a staggering 115 grounds in England.

Recently he said: “My first league game when I was part of a 51,000 crowd at Highfield Road for Coventry’s Second Division title decider against Wolves.

“From that day onwards I have followed the Sky Blues, going to all the grounds in the top flight and gradually working my way through the divisions.

“The total number of grounds I’ve visited is actually 115, because it also includes past and present venues of various teams, such as Brighton and Wimbledon, who have each had three different home grounds.

“I have got a list that I write down and I tick them off and it has got the old grounds on it as well.

“We were in Division One or Premiership for about 30 years and then the Championship for 10 years and I suddenly realised I only needed to do a few.

“I completed the 92 when I went to Fleetwood in March. I thought I had done it last year but I found out that friendlies didn’t count so I had to go back and do eight.

“Nobody has done the 92 and seen their club play at all of them. It is virtually impossible because of teams going up and down.

“But there are only eight grounds I haven’t seen Coventry at. I went to Man City last season when they lost to Wigan in the FA Cup.

“They told me it was sold out when I phoned up but I explained I was trying to finish off the 92 and the woman got me a ticket for number 92.

“People are starting to call me the super-fan at Coventry games now which is a bit embarrassing.

“I’ve had a lot of enjoyment, compiling the list and I’ve already got Barnet earmarked for a visit if they win promotion to the football league.”

Footie-mad John has kept a detailed log of every fixture and has accumulated 1,250 match day programmes and a collection of enamel club badges

All of his memorabilia is carefully stored away in an upstairs “Sky Blue Room” at his home.

The retired quality engineer used to travel to games with his wife Faye but now goes with three friends – with the group calling themselves the Pie Eaters On Tour.

He added: “I’ve had some great times but there have also been some sad, lonely trips.

“Sometimes I have set off alone to attend a match not involving the Sky Blues, when there has been a need to tick off a particular ground, and there have been a few wasted trips.

“I can remember going to Newcastle and hitting snow around Scotch Corner and eventually finding out that the game at St James Park was the only one that day to be called off.

“There was an occasion at Oxford United’s old ground when snow also caused a postponement and I was at Sheffield Wednesday when rain stopped play, with the Sky Blues leading 1-0.”

“My favourite venue is Liverpool’s Anfield and, obviously, the highlight was being at Wembley for the FA Cup final in 1987.

“The lowlight was Villa Park in 2001, when we got relegated and had bricks thrown at us by the home fans as we made our way out of the ground.”

John was just five games short of completing his 92 tally at the start of this season but quickly made trips to Oxford, Mansfield, Cheltenham and Chesterfield.

He was then presented with a club tie and introduced on the pitch when he finished the list at Fleetwood in March when Coventry won 2-0.

But John, who has also travelled abroad to watch England, said he thinks the football Coventry are currently playing is some of the worst he has seen.

He added: “I dread to think how much money I have spent over the years.

“Back in the day to go to away games I used to also have to take the wife away for the weekend too so it cost a bit.

“I haven’t kept a record but I bet I have seen more losses than wins being a Coventry fan.

“I thought we were going to go down this season but we should be just about safe now.

“It has been a terrible season, it’s been one of the worst ever.

“We aren’t going anywhere with the current owners and we have a ground that is too big for us.

“But I will still keep going to the grounds to watch them play, there’s no doubt about that.”