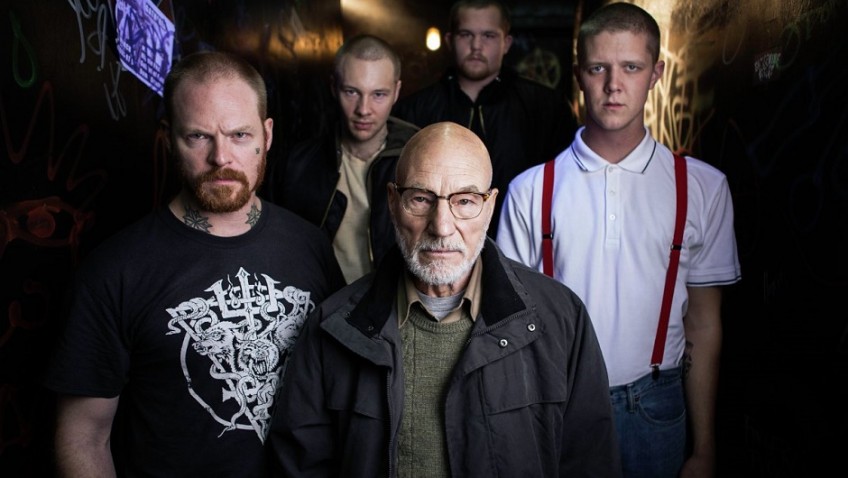 Green Room is an solid horror film, but Jeremy Saulnier’s thriller, Blue Ruin, is still the film to beat.

Two years ago,  Jeremy Saulnier, an unknown American independent cinematographer-turned writer/director ended a 15-year search for a vehicle that would showcase his own talents, as well as those of his out-of-work actor friend, Macon Blair.  The resultant revenge thriller, Blue Ruin, remains not only the best thriller of 2014 but a masterpiece of American independent filmmaking.  Despite its numerable qualities, the same cannot be said for Saulnier’s third feature, Green Room, and it’s not just the colour in the title that has changed.

Green Room is a straightforward horror movie with, on the plus side, a flashy score, a well-known cast (Patrick Stewart is the villain), some good acting, and, for much of the film, reason to tremble.  But after a while you long for the humour, humanity and the wonderfully drawn characters of Blue Ruin.

A young punk band called (for reasons that are immediately apparent), The Ain’t Rights, are sleeping off a hang-over in their van.  With petrol low and money to buy it even lower, they have no choice but to follow-up on a tip that leads them to a roadhouse in rural Oregon.

There is something unwelcoming about the place and this is before we meet the owner, Darcy (Patrick Stewart). Any resemblance to the Jane Austen hero is nonexistent. The house is packed, but not with the kind of audience the band is used to.  Surrounded by thugs who look like a branch of the Klu Klux Klan, the band lash out with a signature song, Nazi Punks F–k Off, and the reaction is predictably hostile..

Lead singer Tiger (Callum Turner), and the musicians Pat (Anton Yelcin), Sam (Alia Shawkat) and Reece (Joe Cole), head for the green room, not to sign DVD’s for their fans, but to hit the road as fast as they can collect their gear.  In the chaotic green room, they find the body of a young woman who has been brutally murdered. Her friend, Amber (the immensely talented actress Imogen Poots), joins the band in their stand against the locals, and, as a former insider, provides some useful guidance and information.  Unfortunately, by the time she thaws to the outsiders, not many are around to observe Amber in action.

Not realising what is going on, the band members earnestly insist on waiting for the police to arrive to investigate the death and clear their names.  The red necks have other ideas as the roadhouse is a front for their basement level drug processing business.   Darcy makes it clear he wants to witnesses.

Panicking when chaos ensues, the band members barricade themselves inside the green room.  It is here that Saulnier shows his skill as a writer as the band behave exactly as you would expect of innocent, young people in way over their heads: they argue, fail to think rationally, misread situations and make a few wrong decisions.  One of those decisions is to pick up anything around that could be used as a weapon and make a dash for it.

As the band members orchestrate their escape, Darcy orders his henchmen on the offensive. As the band members exit, they are attacked by a vicious dog and by hatchets, knives and guns.  It’s a repulsive game of ‘And then there were none.’

In the final third of the film Pat and Amber start to think strategically.  Suddenly they turn in regular Rambos as the fight for survival changes course.  You could say the  transformation is too great, but you won’t, as it’s a relief.

Yelcin and Poots have enough chemistry to make us believe there is more than survival going on, but there is not much room for characterisation let alone character development. With one exception, which might not come as a surprise, the Neo-Nazi’s are all of the same mould, blindly following the mad man Darcy. The blood and gore are effectively inflicted and convincingly felt.  If the appeal of a horror film is leave the viewer’s imagination  overwhelmed at the imaginative and convincing ways in which people die, Green Room is a success of the genre.

The production credits are all excellent, with special mention going to production designer Ryan Warren Smith who turns the roadhouse into a house of horrors, with the lay-out just clear enough to enable us to understand, a dread, what is happening.

The film is not without its dark humour, too, but those blown away by Blue Ruin will miss that film’s emotional depth and wonderful characterisations (even the minor characters are memorable) that give us a stake in the outcome.  If Blue Ruin was riveting from the first frame until the last, the same is not true of Green Ruin.  While there are moments of torturous tension, the first meandering fifteen minutes and the last twenty or so minutes drag.