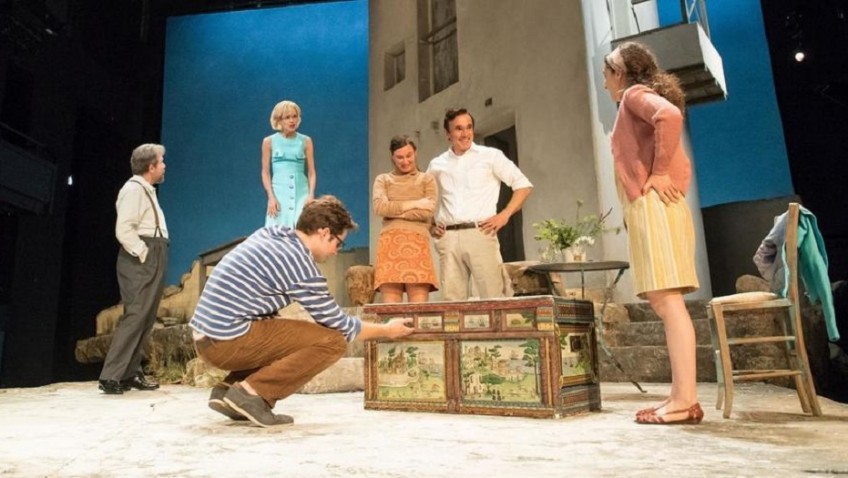 Greece, the cradle of western civilisation, democracy and theatre, is bankrupt.

A young playwright and his actress wife are holidaying in the Greek islands when they bump into an American diplomat who bullies them into buying the peasant cottage they are renting.

The Greeks who own it are emigrating to Australia and are short of money. The English couple get the house at a bargain price. Are they doing the Greeks a favour or merely exploiting them?

Alexei Kaye Campbell, author of The Pride, was brought up in Greece to a Greek father and a British mother. Sunset at the Villa Thalia is a critique of American intervention and the way imperialists appropriate other nation’s cultures.

The action is set in two periods: the first in 1967 and the coup of the Greek Generals and the second in 1976 following the coup in Chile.

The play is directed by Simon Godwin. The cast is good and there is an interesting set by Hildegard Bechtler.

Ben Miles is the pushy, loud-mouthed diplomat (who is a revolver-carrying CIA agent) who insists, despite what he has done and despite the heavy guilt he carries, that he is essentially a good man.

Pippa Nixon is the actress-wife who is forced to re-evaluate her opinion of the diplomat and also to take a hard look at her own Behaviour.

Elizabeth McGovern is the diplomat’s glamorous wife, who likes a drink; McGovern is underused.

Sam Crane is the playwright who wants to write political plays; and (like Alexi Kaye Campbell here) he has had to compromise to get his plays staged by making them semi-political.