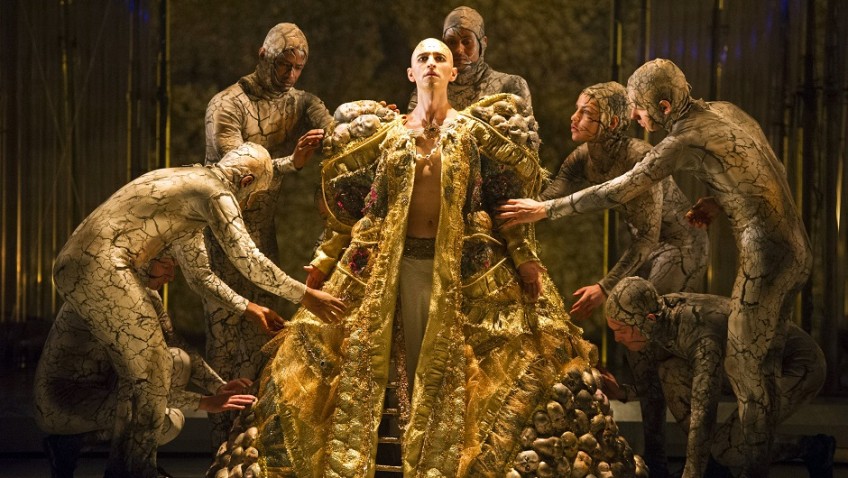 Philip Grass’s extraordinary, monumental yet minimalist masterpiece is given an outstanding mythical, sensory and ballsy production by ENO in collaboration with Improbable, the first fully staged revival since 1987.

The director is Phelim McDermott. The conductor is Karen Kamensek.

There is no story-line as such, nor characterisation. The opera is a series of richly costumed religious rituals – funeral, coronation, marriage and murder – at the court of Akhnaten in 14th century BC Egypt – and they are acted out in riveting ultra-slow motion.

The opera uses texts drawn from ancient hymns, prayers, letters and inscription sung in their original Egyptian, Hebrew and Akkadian. Zachary James’s Scribe, a powerful presence, has to do all the talking.

The opening chord (which seemed as if it might go on forever) is mesmerising. The drama, chorally, comes in the third act in the brutal confrontation with the high priests of the old religious order. Chorus and orchestra (no violins) are in fine form.

Pharoah Akhnaten, father to Tutankhamun, ruled Egypt around 1351-1334 BC. He renounced monotheism in favour of polytheism. His god was the bi-sexual Sun.

Never afraid to show his feminine side he parades his deformed nude body for the benefit of priests and subjects. Counter tenor Anthony Roth Costanzo, shaven headed, no body hair, completely nude and then wearing close-clinging clothes, always vulnerable, is hypnotic vocally and physically.

Akhnaten and his wife, Nefertiti (Emma Carrington), and his mother, Queen Tye (Rebecca Bottone), look as if they had stepped off the walls in the tombs of the pharaohs in the Valley of the kings in Ancient Egypt.

A notable feature of the production is the Gandani Juggling Company. The ten jugglers are also initially seen as if they were an Egyptian frieze, sideways on. They juggle three balls individually in synchronised unison and between each other and they never drop any. Later they juggle skittles and balloons.

ENO at this time needs all the support it can get from Arts Council, government, public and sponsors; and this excellent production ofAkhnaten justifies that support.