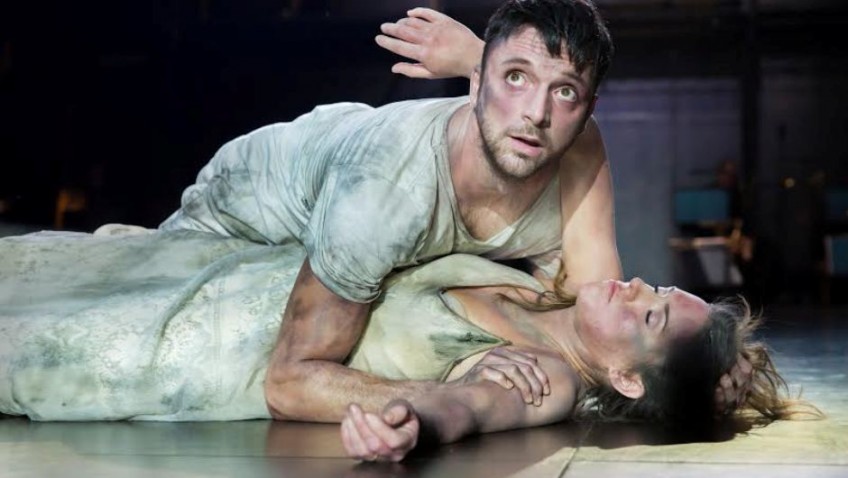 Forget Dante. Don’t abandon hope. You are in for a musical treat.

The legend of Orpheus and Eurydice has inspired so many artists. Which would you prefer to see:  a sculpture by Rodin, a painting by Corot a film by Cocteau, a play by Anouilh, a ballet by Balanchine to music by Stravinsky, or an opera by Monteverdi?

Monteverdi’s Orfeo premiered in Mantua in 1607 is generally considered to be opera’s first masterpiece. Michael Boyd, the former artistic director of the RSC, who is making his opera debut, takes the story out of Ancient Greece and puts it in a modern setting. The production, mounted on a round stage, works best in the dark of Hades rather than in the light of the mortal world.

The moment everybody waits for in the legend is when Orpheus turns to make certain Eurydice is following him and loses her forever. The gods can be very cruel and malicious.

The cast is dressed in suits. Gyula Orendt as Orfeo wears a dirty white suit. He has no lyre. (Orpheus without a lyre is like Sherlock Holmes without a pipe.) The dancers wear boiler suits. There are no shepherds. Instead there are Roman Catholic priests.

The music, which the Early Opera Company plays on period instruments, is a joy. There is also some quite exceptional emotional singing from Orendt; the high spot is his aria with the grief-stricken cry, “Give back to me my own!”

There is admirable support from Mary Bevan as Eurydice and Susan Bickley as a Messenger of bad news. James Platt’s bouncer-like Charon is not somebody you would want to mess about with.

The vocal ensemble is sung by graduates from the Vocal Department of the Guildhall School of Music and Drama.

The East London Dance provides the visual effects. They are at their most effective when they are rolling and writhing on the ground in the second act, representing the River Styx.

In the first act, when they are building precarious human pyramids, they are often distracting. A particularly bad moment is when a solo gymnast accompanies one of Orfeo’s arias. It’s an intrusive,  jarring sound every time her feet hit the ground with a loud thud.

Orendt is expected to be as athletic as the dancers. One image, with him lying on Eurydice’s lap, imitates Michelangelo’s Pieta. The final image, showing him on his way to heaven, has him doing a risky Cirque de Soleil trapeze act.