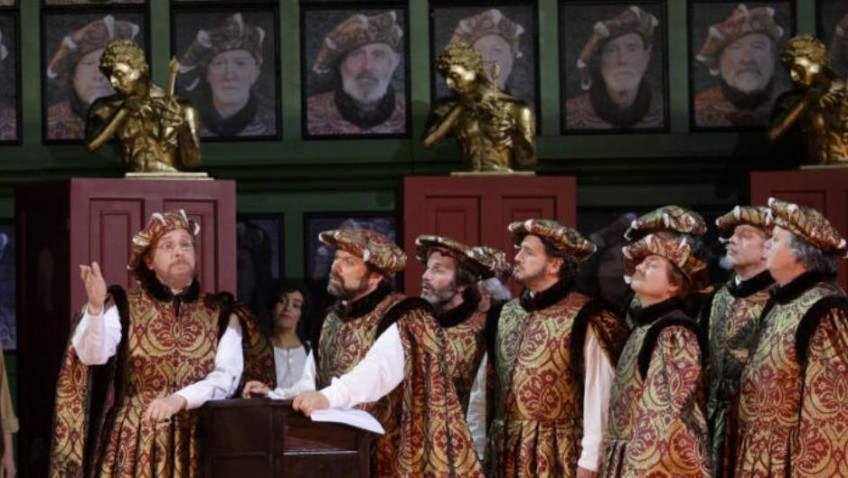 Wagner decides to cheer himself up with something lighter

Wagner, as you know, does go on and on and on. 5 hours 40 minutes sounds and is a long haul, even with intervals.

OK, the opera has its longueurs and audiences may wilt; but I can still remember the very first time I saw The Mastersingers and I count it amongst my most memorable theatrical experiences.

Directed by Richard Jones, conducted by Edward Gardner and costumed by Buki Shiff, with some fine signing by principals and chorus, the present production, and its high standards, could hardly be timelier. It is a notable riposte to some of the unfavourable publicity ENO and its artistic director John Berry has been getting recently.

Walther von Stolzing (Gwyn Hughes Jones) falls in love with Eva Pogner but he cannot marry her because her father has promised her to the man who wins the Mastersingers’ singing contest.

The moment Walther opens his mouth, Sixtus Beckmesser (Andrew Shore), the Guild’s chief marker, recognises a voice vastly superior to his own. Since he wants to marry Eva (Rachel Nicholls) himself, he, being the sort of man he is, fails him on the spot.

Iain Paterson is cast as Hans Sachs, the much-loved poet/cobbler, who, alone among the Guild members, recognises Walther’s talent and comes to the young man’s rescue, despite the fact that he himself is also in love with Eva.

The opera was first performed in Munich in 1868 and it was and it remains a hymn to the creative spirit and German culture in particular.

The third act is particularly memorable. The choral singing is thrilling. Nowadays it is, of course, quite impossible to listen to its extreme and frightening nationalism and not to recall the Nazi rally in Nuremberg in 1934.

Film director Leni Riefenstahl used Wagner`s Prelude in The Triumph of the Will, her notorious propaganda documentary, which was commissioned by Hitler.

In the 1980’s there was a production in Frankfurt which staged the opera with the full Third Reich treatment, swastikas and all.  Richard Jones, in his production, offers a more attractive alternative with a huge collage of faces, pictures of famous Germans who have contributed significantly to her culture.