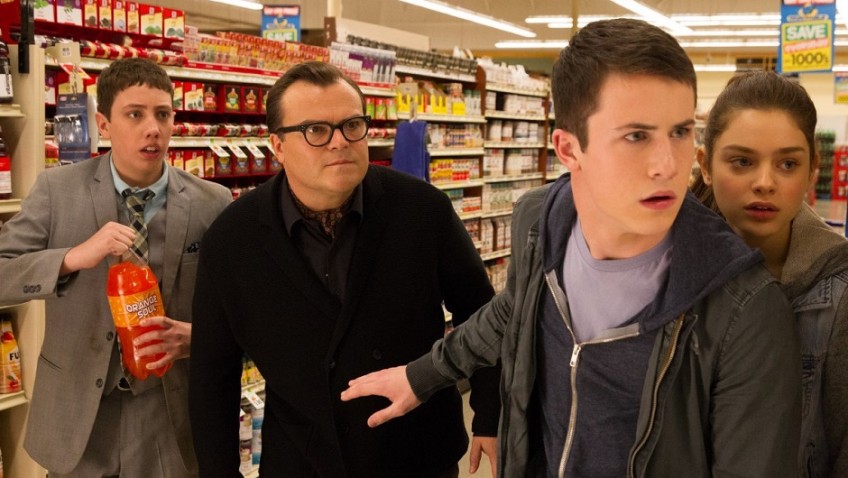 Goosebumps misses too many tricks for cult classic status

Rob Letterman’s (Shark Tale, Los Gringos) Goosebumps is a fantasy horror comedy suitable for a date movie or for the whole family – although some of the monsters might scare younger children. Letterman combines live action and animation to distinguish between the traditional, suburban Delaware setting and the monsters that wreak havoc on the town when they emerge from the books of reclusive, mysterious author RL Stine (Jack Black).

The first half of the film at least, is entertaining with laughs and surprises and the occasional knowing nod to the real life Stine, dubbed ‘the children’s Stephen King.’  If the two young leads had been half as good as Jack Black, and more thought had gone into the repetitive, increasingly tedious second half, Goosebumps could have been a classic. But that’s a lot of ifs.

Zach Cooper (Dylan Minnette) moves to a boring town in Delaware where his single mother, Gale (Amy Ryan) has been appointed the new deputy principal of Zach’s new high school. Although Zach is a good looking guy, his first and only friend is an accidental one, the unpopular nerd Champ (Ryan Lee) who, like Zach, does not have a date for the first term dance.

While Zach is more intrigued with Hannah (Odeya Rush), the pretty, home schooled girl next door, than with anyone at his high school, her nasty father (Black) is proving to be a problem.  A round, chubby face with big black eyebrows and black glasses appears in a crack in the door informing Zach that if stays away from their house ‘there won’t be any problems.’

Concerned about Hannah after hearing an argument, Zach calls two clueless police  officers.  They show up at Hannah’s house only to be convinced by her father that Zach has invented the whole thing.  Gale is ashamed of her son and attributes his conduct to the recent death of his father.  His bond with Hannah grows tighter when she tells him she never knew her mother.   When Zach persists in his attempts to see Hannah, her father warns him that bad things will happen if he doesn’t leave them alone.

He is not wrong – as Champ and Zach discover when they sneak into the house.   They make another discovery first, however when they enter the study. Hannah’s father is none other than Champ’s favourite author, RL Stine.

It turns out, however, that Stine is only indirectly responsible for the chaos which ensues and it is in his interest to prevent stem the damage if he is to avoid moving again. So Stine and Hannah join up with Zach and a reluctant cowardly Champ as they try to save their lives and the lives of the townsfolk, many of whom are having fun at the school dance.

During the second half of the film more of the monsters are introduced and we watch the four main characters running away from one monster after another, temporarily escaping them only to encounter another.  It is probably more fun for younger audiences to encounter the various creatures that emerge than it is for the adults, particularly as they are not as scary as they look.

There is some character development as Champ is rewarded for an unlikely act of heroism and Stine shows an interest in Zach’s wacky aunt, but for the most part noisy shrieks and people running from monsters substitute for plot development.  It grows a bit tedious.

Throughout the film, however, Jack Black is in top form with his comic timing, body language, humorous reactions and the occasional innuendo.

Goosebumps is one of several films (Inkheart and Stranger than Fiction for example) in which a writer’s creations literally come off the page to haunt the author and/or his readers.  While this is always an appealing conceit as so many of our literary friends do keep us company throughout our lives, it is difficult to sustain.

One wishes that the writers had come up with a more clever resolution to the ordeal, as this one lacks RL Stine’s imagination and seems a bit too easy, particularly as there is little evidence that Zach has any interest in books or writing. The five credited script writers really missed a trick, both in terms of the protagonist’s (Zach) character development and the plausibility of the climax by failing to make Zach a budding writer who has to prove himself by writing them to safety.