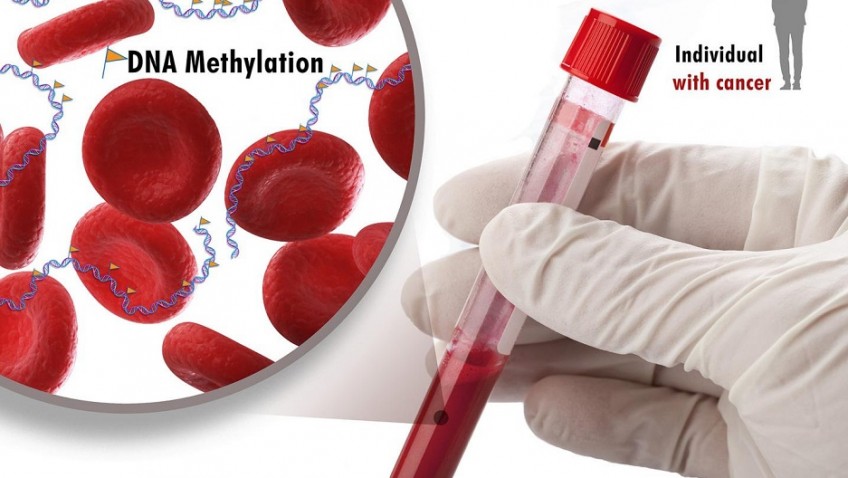 A blood test to detect the early stages of cancer could soon be available after scientists found tumours have a specific chemical signature.

Cancers of the colon, lung, breast, stomach and womb all shared a striking signature in tumour DNA and only minute quantities are needed to give a positive reading.

And the chemical trace could be present in other cancers too such as ovarian cancers which are difficult to detect until they are at an advanced stage.

The specific signature results from a chemical modification of DNA called methylation, which can control the expression of genes like a dimmer on a light switch.

Higher amounts of DNA methylation (hypermethylation), like that found by the researchers in some tumour DNA, decreases a gene’s activity.

Being able to spot this early will allow treatments to start when they are most effective, researchers from the National Institutes of Health in Washington DC said.

Currently blood tests to detect cancers, doctors first have to find a tumour, due a biopsy and then determine its genome sequence.

Once the tumour-specific mutations are known, they can be tracked for appearance in the blood.

The new test promises to be less invasive and could be used to monitor those at high risk of cancer or how well treatments are performing.

Dr Laura Elnitski said: “Finding a distinctive methylation-based signature is like looking for a spruce tree in a pine forest.

“It’s a technical challenge to identify, but we found an elevated methylation signature around the gene known as ZNF154 that is unique to tumours.

“We have laid the groundwork for developing a diagnostic test, which offers the hope of catching cancer earlier and dramatically improving the survival rate of people with many types of cancer.”

Three years ago she discovered a methylation mark or signature around ZNF154 in 15 tumour types in 13 different organs and deemed it a possible universal cancer biomarker.

These are biological molecules that indicate the presence of disease and were identified from solid tumours.

Dr Elnitski added: “No one in my group slept the night after that discovery.

“We were so excited when we found this candidate biomarker. It’s the first of its kind to apply to so many types of cancer.”

The new study published in The Journal of Molecular Diagnostics developed a series of steps that uncovered tell-tale methylation marks in colon, lung, breast, stomach and endometrial cancers.

They showed that all the tumour types and subtypes consistently produced the same methylation mark around ZNF154.

It used computer modelling to predict a threshold for detecting tumour DNA even in samples that had the amount of methylated molecules reduced by 99 per cent.

Knowing that tumours often shed DNA into the bloodstream, they calculated the proportions of circulating tumour DNA that could be found in the blood.

Further experiments will screen blood samples from patients with bladder, breast, colon, pancreatic and prostate cancers to determine the accuracy of detection at low levels of circulating DNA.

Tumour DNA in a person with cancer typically comprises between 1 and 10 per cent of all DNA circulating in the bloodstream.

It noted 10 per cent of the circulating DNA contains the tumour signature and the detection rate was quite good.

Because the methylation could be detected at such low levels, it should be adequate to detect advanced cancer as well as some intermediate and early tumours, depending on the type.