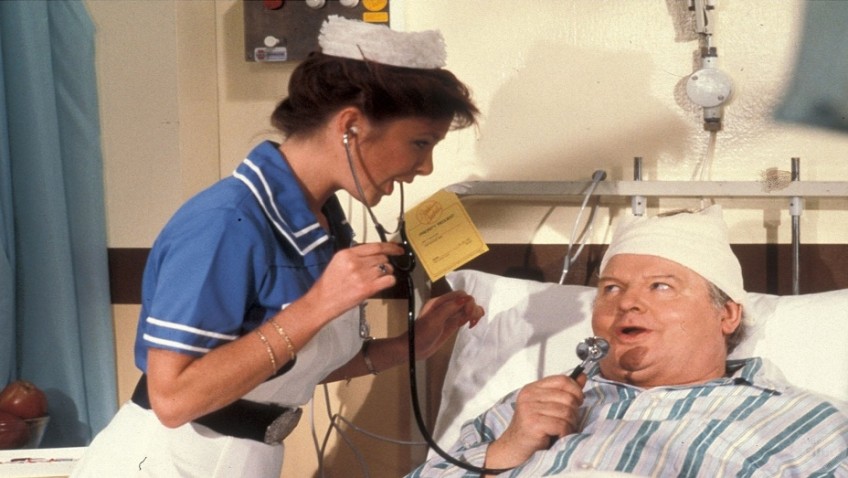 THE BEST OF BENNY HILL (Network). Benny Hill (1924-1992), the first comedian star to be made by TV, went on to be the most popular comedian in the world, admired by his peers, notably Charlie Chaplin who loved his slapstick. Hill fell foul of the politically correct brigade and was sacked by Thames Television in 1989. Killed off, he died an early death; and is now largely forgotten. His comedy was based on innuendo, bosoms, bottoms and nubile girls. The speeded-up chases were always good fun.  Hill had the look of a naughty cherub who never grew up and his so-called smut and sexism were innocent and as naughty as a Donald McGill dirty seaside postcard.

BOND STREET (Network). British portmanteau film from 1948: four short stories by Terence Rattigan and Rodney Ackland. 1. Kathleen Harrison is a tearful overworked seamstress who wants to be in the hospital when her daughter gives birth. 2. Jean Kent (prostitute) gives shelter to a murderer on the run (Derek Farr) in a parody of a film noir. 3. Young Kenneth Griffith is a creepy blackmailer who bullies his wife (Patricia Plunkett). He is given his comeuppance by a nice chap (Ronald Howard). 4. Bridegroom (Robert Flemyng) is confronted by his ex-Danish girl friend (Paula Valenska) on his wedding day. The ever reliable Roland Young (as his father-in-law) gets rid of her. The tiny supporting roles are filled with actors who would later become famous

LOBSTER (Spirit) directed by Yorgos Lanthimos is a bizarre Art House absurdist horror satire, which will not be to everybody’s taste, but it will probably get a cult following.  Single people staying at a spa hotel have to get married within 45 days or they will be turned into an animal of their choice. Will the dull ordinary hero (Colin Farrell with tummy and moustache), who is accompanied by a sheepdog (his former brother who didn’t make it), be able to find a mate or will he turned into a lobster? Olivia Colman is the spa manager. John C Reilly and Ben Wishaw are residents.

THE AMOROUS PRAWN (Network). Anthony Kimmins’ indifferent stage farce had a long run in the West End in 1960 and he turned it into a film a couple of years later. A general’s wife turns army headquarters into a luxury hotel and rooks rich gullible Americans whilst her husband is away. The military get into mufti and pretend to be servants. You might think that with a cast of such experts in comedy as Ian Carmichael, Joan Greenwood, Cecil Parker, Derek Nimmo, Dennis Price, Liz Fraser and Finlay Currie they might be able to make it funny. No such luck, I’m afraid.