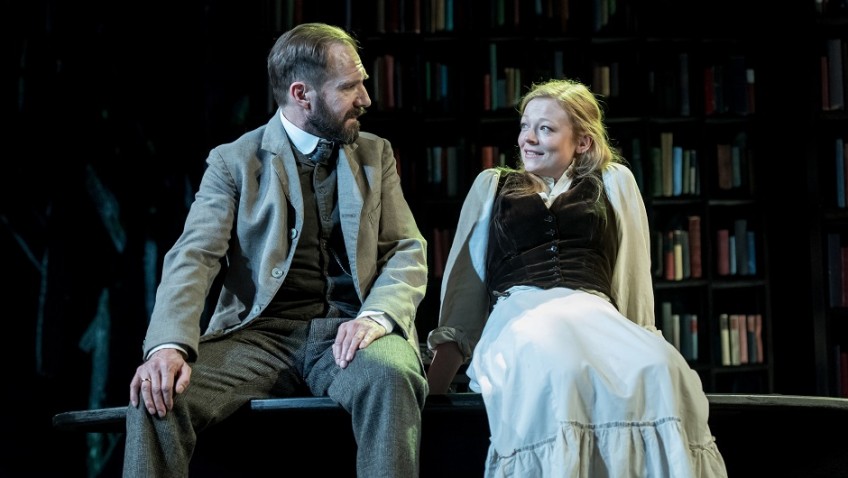 The critics at its British premiere in 1893 were quick to dismiss Henrik Ibsen’s play as “three acts of gibberish… incoherent and absolutely silly… a feast of dull dialogue and acute dementia… the most dreary and pointless drivel ever heard on the English stage.”

One critic said he felt he was watching a play “written, rehearsed and acted by lunatics.”

Today, The Master Builder is considered a masterpiece and the leading role has attracted actors of the calibre of Michael Redgrave, Laurence Olivier, John Wood, Alan Bates, Patrick Stewart and now Ralph Fiennes.

Open to many psychological interpretations, it is not the easiest of plays.

Halvard Solness, the master builder, who has pushed his way to the top, ruthlessly sacrificing everybody’s happiness to his career, is terrified his luck will change and that his young apprentice will push him off his pedestal.

Solness used to build churches. Now he wants to build homes for human beings. It seems, however, much more likely that he will end his life building castles in the air.

At the very moment when he is fighting a losing battle against the dark forces within him and thinking he is going mad, Hilde Wangel re-enters his life.

Ten years before the play began, when she was a girl of thirteen, he had kissed her and promised to make her his princess. (So she says – or is she lying?)

Audiences-in-the-know presumed that Hilde Wangel was a portrait of Emilie Bardach with whom Ibsen had fallen in love in 1889 when he was 61-years-old and she 18.

However, when Bardach saw the play she did not recognise Hilde as a portrait of herself; however, she did recognise Ibsen in Solness.

Ibsen had long thought of playwrights as architects and plays as works of architecture. The Master Builder can easily be read as an allegory of the writer’s life: a cry of anguish against Youth beating at the door of his own declining creativity.

Director Matthew Warchus and David Hare, the translator, keep the Freudian symbolism firmly in check. There are extraordinary sets by Rob Howell, which are presumably the cause for two intervals rather than one.

Ralph Fiennes is tremendous as the arrogant, vindictive, deeply guilty Solness and the performance builds to a powerful climax, which, finally, seems to have less to do with living out a sexual fantasy and more to do with hubris and blasphemy.

There is strong support from Sarah Snook as the egotistical Hilde Wangel, a predatory tease (no breath of fresh air, she) who prefers to see her childhood hero dead rather than see him less than perfect

And there is strong support, too, from Linda Emond as the neglected, dutiful Mrs Solness, who, frighteningly, admits she loved her dolls more than her children.