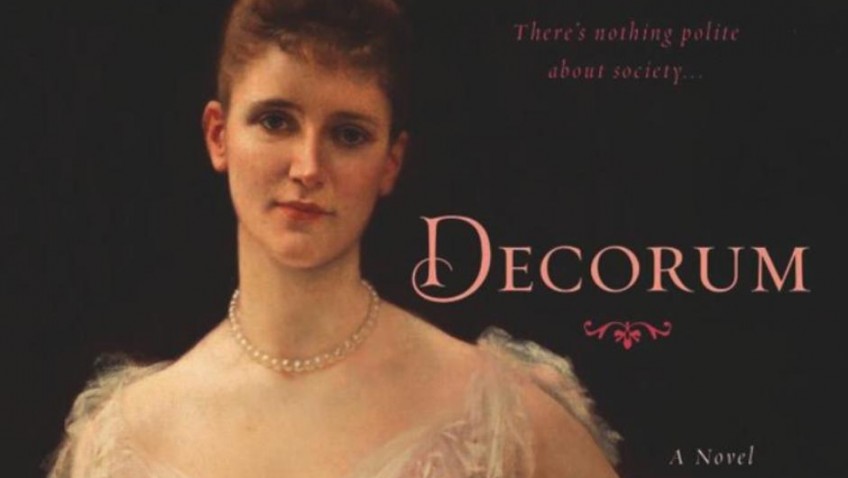 Published in paperback by Kensington and priced £9.99

Set in 1890s New York and we follow the fortunes of Francesca Lund, a wealthy young woman in her 20s, who has lost her family through an accident and is taken in by her father’s business friends and families.

When the story opens, she has decided it is time to make her own way in the world and moved back into the family home.  She has inherited a fortune, but is in need of a husband as required by New York Society.  In the days when a wife was expected to hand over all her property and control of her finances to her husband, Francesca is fair game for fortune hunters.

‘Decorum’ is a book actually owned by the great-grandmother of the author which dictates the rules of etiquette and behaviour of polite society, from which the novel title derives.

Francesca has accepted a marriage proposal from Edmund Tracey who we know from the start, is not the man she thinks he is. Tracey is shown as a charlatan and liar has designs on her fortune.  There are many other characters who populate the world of high society, almost too many at the start for the reader to assimilate.  But bear with it and the important personae reveal themselves.

Francesca’s circle includes snobbish and pretentious wives of wealthy businessmen.  This is the post civil war American society of Edith Wharton and Henry James, which came to be known as the ‘Gilded Age’.  Based on conspicuous wealth and supercilious posturing, American royalty was decided by the affluence of the few.

One such millionaire is Connor O’Casey who, although in a dubious relationship with an impecunious widow, is determined to better himself.  Irish born O’Casey is fascinated by Francesca and is resolute in making her part of his goal to fulfill his image of the wealthy man with a family, a respectable name, and a luxury hotel business in the heart of New York. But Francesca’s surrogate family is disapproving and her own increasing self-reliance makes it difficult for him.

Without giving too much of the plot away the story has some unpleasant revelations and a change of location which in itself brings a change of heart.

Kaaren Christopherson’s brilliantly observed novel captures the era of the glamour in one of the worlds most dazzling cities. Her characters are exciting and elegant, but the shallow façade of their existence hides the ugly truth of lies, infidelity and even murder.  She has skillfully recreated the aura of gentility of this epoch when New York was aiming for the pinnacle of polite society, while worshiping the god of mammon.

Clearly following the rules of strict decorum is not necessarily the way to happiness and contentment.