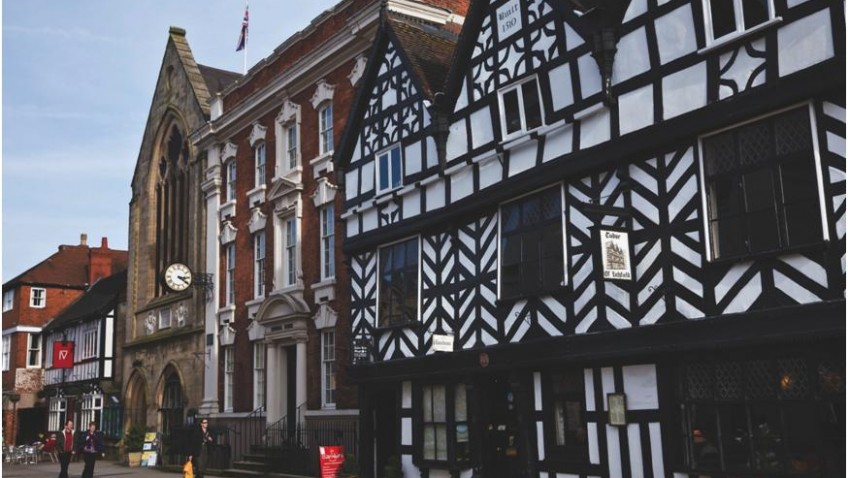 Polymaths and pioneers, philosophers and saints have all left their mark on Lichfield. Helen Werin goes for some historical overload. Pictures by Robin Weaver.

Lichfield’s most famous son, Dr Samuel Johnson, told of how he turned his visiting London-based friend loose in his home city so that the man might “for once see real civility”.

Fast forward 260 years and the sentiment of the man with the most wonderful way with words still has plenty of truth in it.

It’s Saturday afternoon and Lichfield’s cobbled Market Square, where people were once burned at the stake for such ‘crimes’ as heresy, is brimming with stalls. Around the corner, Bore Street displays an impressive, though eclectic, mix of medieval Tudor, Stuart, Georgian and Victorian buildings, including the half-timbered Lichfield House and Five Gables, from the 16th century.

The Gothic-style Guildhall, which has been a jail, courthouse, fire and police station in its time, is hosting charity stalls. Tiny alleyways between timber-framed houses lead to lots of quirky little shops and, for a change, there are plenty of individual family businesses in the city centre.

This is a city which has also managed to hang on to its many streets of beautiful red brick Georgian buildings, once home to fashionable families in the 18th century.

From the viewing platform in the spire of St Mary’s Church above the Market Square – now the Lichfield Heritage Centre – we can clearly see the grid pattern of streets from medieval times. Dominating the scene is the glorious three spired cathedral which took 150 years to build, but a lot less time for Cromwell’s army to wreck. In the 19th century the cathedral was restored at a cost equivalent to £30m in today’s money.

Dr Johnson called Lichfield ‘a city of philosophers’, saying: “We work with our heads and make the boobies of Birmingham work with their hands”. No wonder; in his day Lichfield was regarded as a place of high society. It was home to some of the most influential pioneers in Britain including Erasmus Darwin, grandfather of Charles and esteemed doctor, scientist, inventor, and David Garrick, the famous actor and playwright, for whom the city’s modern theatre is named.

A tour of the city’s museums is certainly better than any number of history lessons. The Samuel Johnson Birthplace Museum, in one corner of the Market Square, is set above a bookshop, just as it was in Dr Johnson’s boyhood. There are five floors showing the life and achievements of the man whom the museum attendant rather understatedly called “basically, a journalist”. Albeit a man who took 10 years to painstakingly compile one of the first dictionaries and whose contributions have made such a lasting impact on English literature. His soundbites are so profound there is a hugely popular website devoted entirely to them. Johnson’s definition of dull work, for instance? – “making dictionaries”.

Opposite the cathedral, another tiny alleyway off the beautifully preserved close leads us to pretty, flower-filled courtyards of small houses with alarmingly saggy rooflines and even more alarmingly bulging walls. This is the Vicars’ Close, built for the lay men who sang the many services at the cathedral.

Lichfield may be one of England’s smallest cities, but it is very obviously proud of its heritage and bound by many traditions. It still holds an ancient court in the Guildhall to inspect its ‘men-at-arms’ and a well-dressing ceremony at St Chad’s well. Each September it stages the annual riding of the bounds – the city limits – on horseback to maintain its city status.

The sheriff leads the parade, often accompanied by over 100 other riders. It seems that whilst some sheriffs have regarded the event seriously enough to take riding lessons beforehand, some female sheriffs not quite up to being on a horse have had to resort to making the 16 mile journey in a four wheel drive vehicle.

One wonders what Samuel Johnson would have made of that!