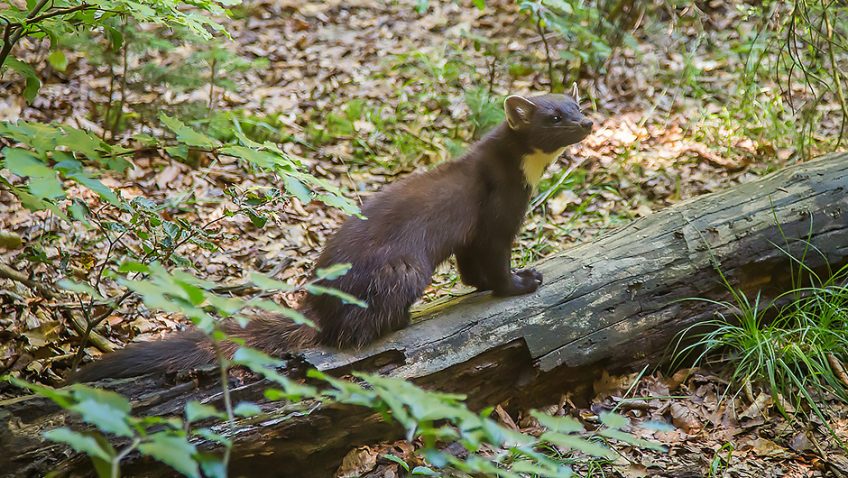 Back from the Brink’s Pine Marten Project, led by The Vincent Wildlife Trust, has captured what is thought to be the first ever video footage of a pine marten in Northumberland.

Tom Dearnley, Ecologist from the Forestry Commission, said “This is tremendous news and we are delighted to witness the return of pine martens in one of the forests we manage. We have had occasional reports of pine martens in the area, but this video proves that they are now back in the forests of Northumberland. We are delighted to be working in close partnership with The Vincent Wildlife Trust, supporting both the camera programme and artificial den sites in Forestry Commission woodlands, as well as the wider Back from the Brink programme.”

The Pine Marten project is working with local people to help in the recovery of the pine marten population in Northumberland and Cumbria. This work is a National Lottery funded programme, a partnership of wildlife conservation organisations which aims to prevent the extinction, and promote the recovery, of more than 200 species across England.

“The trail camera has been in situ for just two weeks, one of ten we have placed in remote woodlands across Northumberland,” said Kevin O’Hara, Back from the Brink’s Pine Marten Project Officer. “Local volunteers are surveying woodlands to monitor the natural spread of the pine marten into Northumberland and Cumbria from southern Scotland, and it was two of our volunteers, Neil and Amanda Tomas, who spotted the footage while doing a routine check of the camera”.

“It’s a once in a life time discovery for wildlife watchers and just reward for going through thousands of ten second videos, mainly of foxes and deer!” said Neil and Amanda.

This Vincent Wildlife Trust-led project is working not only with local communities, but also landowners and land managers. As well as monitoring woodlands for signs of pine martens, woodland habitat will be enhanced by installing artificial den boxes to provide resting and breeding sites. In the longer term, help will be given to improve connectivity between woodlands to allow pine martens to re-colonise suitable areas.

“There are lots of opportunities to get involved with the project,” said Kevin. “Volunteers can help with the deploying and monitoring of remote cameras and take part in surveys for signs of martens, such as looking for their droppings or checking hair tubes and den boxes for evidence of activity. We’d also like to hear from anyone who thinks they may have seen a pine marten in the area.”

The pine marten is Britain’s second rarest carnivore after the wildcat. It is seen as a species in urgent need of conservation action and the spread into northern England will be an important step in its recovery.