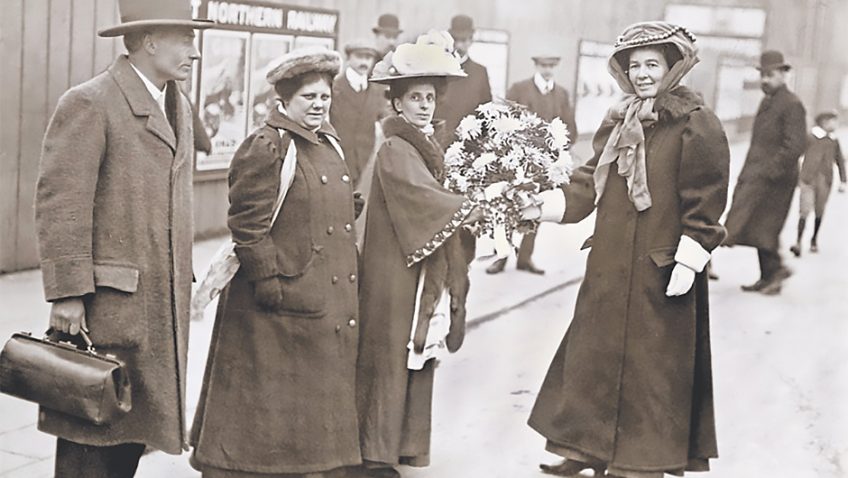 This year marks the 100th anniversary of the Representation of the People Act, which, amongst other changes, granted the vote to some women in the UK for the first time. Although this was only for women who owned at least £5 worth of property (or whose husbands did) and were over the age of 30, this was a seismic change. Whilst it would be easy to see the fight for women’s suffrage as causing a ‘war between the sexes’, the reality was not so clear-cut.

We probably find it hard to understand today, but not all women were in favour of having the vote. The prevailing social attitudes at the time meant that many women really believed that they didn’t have the intellectual rigour to make political judgements. We must remember that the vast majority of women lived in a hierarchical society dominated by men and the threatened great upheaval of the social order made by many men was a real fear for many women. Even Queen Victoria was opposed, famously saying: ‘…this mad, wicked, folly of ‘women’s rights’ with all its attendant horrors…’

The Women’s National Anti-suffrage League was established in 1908 to counter the arguments for female suffrage with Lady Jersey as the chair and Gertrude Bell as secretary. Interestingly, the organisation merged with the Men’s League for Opposing Woman Suffrage in 1910, with Lord Cromer as its first president.

Although it is true to say that the majority of men were against women being granted the vote, and that many believed that female suffrage was ‘irresponsible’, many men were enthusiastic in their support of the suffrage cause.

Amongst the high profile male supporters of universal suffrage were two leading Labour politicians of the day; Frederick Pethick-Lawrence and George Lansbury.

Frederick Pethick-Lawrence played an active role in the suffragette movement, using his wealth and training as a lawyer to assist the suffragettes campaign and individual suffragettes, and along with his wife, Emmeline, he edited the publication ‘Votes for Women’. His treatment by the government of the day was markedly severe; he was imprisoned, went on hunger strike, forcibly fed and later faced bankruptcy. A Labour MP between 1923 and 1931, he remained committed to feminist causes: his maiden speech in 1924 was in support of widows’ pensions and in the following decades he supported the campaign for equal pay for women.

George Lansbury was a lifelong socialist and supporter of women’s rights, along with his wife, daughters, sons and daughters-in-law. On entering the Commons in 1910, Lansbury quickly affirmed his support for women’s suffrage and suffragettes. In November 1912, frustrated by the Labour Party’s ambiguous stance on universal suffrage and in an attempt to highlight the plight of the suffragettes, he decided to resign his seat so that he could fight a by-election on the question of votes for women. Although he lost the by-election, he continued to support the suffragettes’ cause. In 1912, he said: ‘I believe that this fight for women’s enfranchisement is the biggest fight socially that is going on in our country’. Lansbury did not return to Parliament until 1922 and served as an MP until his death in 1940.

Whilst we should always remember the huge number of women who sacrificed their reputations, families, homes, relationships and, in some cases, their lives, in their dedication to the suffragette cause, we should also remember those men who went against social convention to support a cause they fervently believed was both just and moral.