A filmmakers’ film that is a must for any serious cinephile

The year begins with the re-release of Jean-Luc Godard’s hit film, Le Mépris, a film that is to French 1960s style, modernity and glamour what Blow-Up is to the British Swinging Sixties.  But If Blow-Up is directed by Italian Director Michelangelo Antonioni, Godard’s film is not just set in Italy, but at the spectacular Casa Malaparte on the Isle of Capri and at CineCittà Studios, dubbed Hollywood on the Tiber, where three years earlier Fellini made La Dolce Vitta, another classic about the hollow glamour of the film industry.

Le Mépris, based on Italian author Alberto Moravia’s A Ghost at Noon, is about a doomed adaptation of Homer’s The Odyssey, turned into a metaphor of a husband and wife driven apart by the husband’s vocation.  Shot by Raoul Coutard (Breathless, Jules et Jim) Godard floods the screen with primary colours that infuse the stunning sets and costumes and shimmer in Technicolor glory above Homer’s endless sea when the production moves to Capri.

Starring Brigitte Bardot at her most seductive, a young Michel Piccoli, Jack Palance and Fritz Lang himself as the beleaguered, philosophical film director, Le Mépris will be given a UK-wide release to launch the BFI’s extensive Jean-Luc Godard retrospective (January 1-16 March 2016).

Like Rossellini’s Journey to Italy (1954) and Antonioni’s L’Eclisse (1962) before it, Le Mépris is about the break-down of a relationship when the woman (Bardot) becomes disillusioned by her partner’s (Piccoli) materialism.  But Godard did not have to look at other masters for his theme or the emotional charge that injects the deliberately-paced film with a restless tension.

His own recent marriage to his muse Anna Karina was already on the rocks because Karina felt alienated by her husband’s obsession with his work.  Ironically, she went on to have three more marriages with men in the film industry, including a script writer and two directors.

The first scene in Le Mépris, inserted at the producers’ insistence, shows a nude, playful Bardot sprawled across the marital bed that might suggest a couple still very much in love.  But within minutes, a brooding rift develops between scriptwriter husband Paul Javal and his beautiful bride Camille (Bardot).

The rift is symbolised by the heightened role of a multi-lingual translator (Giorgia Moll) whose presence underscores not just the difficulty of communication between different cultures (this is a co-production) and age brackets (Lang being far old than Prokosh or Paul), but the break-down in communication between this French couple.

Hard-headed American Producer Jeremy Prokosh (Jack Palance) is blunt in his rejection of German Director Fritz Lang’s vision for his adaptation of The Odyssey.  Paul, the French novelist-turned-scriptwriter, is forced to choose between his integrity and his wallet when Prokosh offers him a small fortune to rewrite the script. ‘You need the money’, Prokosh reminds Paul who asks him how he knows. ‘Because you have a very pretty wife,’ the playboy producer answers.

But Camille, a 28-year-old former typist, is not as attracted to material possessions as Prokosh suspects. ‘You used to write crime novels, but we were fine,’ Camille points out, blaming Paul’s association with ‘the movie people’ for their troubles.  Paul tries to convince Camille that the cheque will pay off their new flat in Rome, but in a long sequence in the stylish flat, shot almost in real time, it becomes clear she sees it more as a Faustian pact.  Paul has an even harder time trying to persuade Camille to accompany him to Capri where she knows the isolation will intensify. 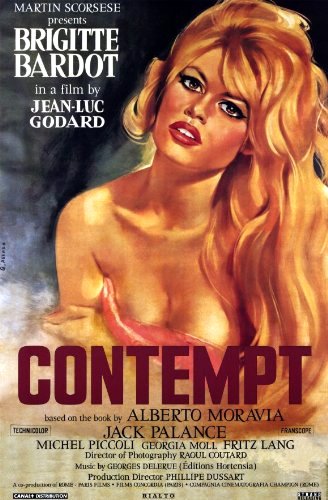 Once the action shifts to Capri the film and literary references and the metaphor expand, as Pavel and Prokosh seem to agree that Ulysses’ much delayed return was intentional.  He set up Penelope with her suitors whom she had to entertain, and when he finally returned he had no choice but to kill them.  Meanwhile, we see this played out when Paul continually encourages an unwilling Camille to go off with Prokosh, until she finally does so for spite, with fatal consequences.

The Capri segment is famous for its spectacular setting in the Casa Malaparte, a 1937 villa that sits precariously on a cliff 32 metres above the Gulf of Salerno.   Its semi-derelict state, the result of the owner’s rejection of his architect’s design, has direct parallels not only in Prokosh’s rejection of Lang’s vision, but as an omen of the fate of the Javals’ apartment in Rome.

If film historian and Director Martin Scorsese used George Delerue’s music from Contempt for a scene in Casino, another film in which a marriage disintegrates, it is less for the strained parallels than to pay homage to Le Mépris, a filmmakers’ film that is a must for any serious cinephile.