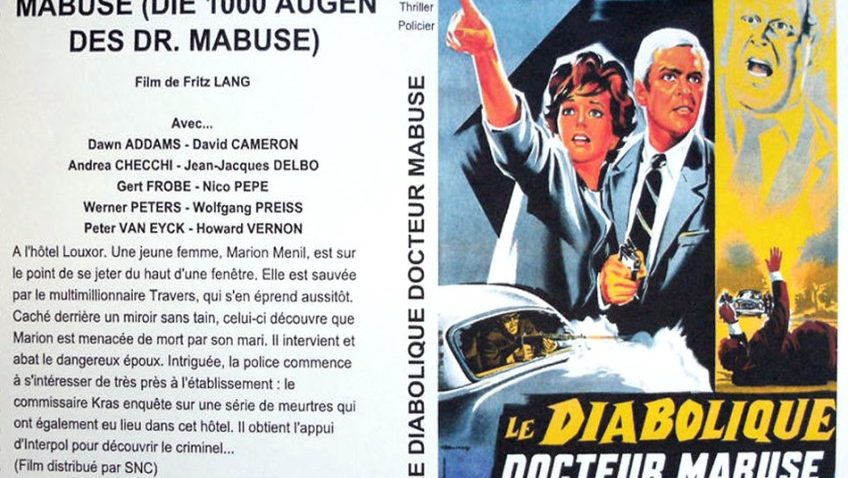 The Thousand Eyes of Dr Mabuse (Fritz Lang) 103 mins. Released from May 11, 2020, on Blu-ray as part of Eureka Entertainment’s the Masters of Cinema Series

Here is a film trivia question for you: What was the final film written and directed by Fritz Lang, arguably the greatest Austrian-German film writer-director? The answer is The Thousand Eyes of Dr Mabuse [Die 1000 Augen des Dr Mabuse] of 1960, although this fact is anything but film trivia.

How Lang, who left Nazi Germany in 1933 for Paris, and then Hollywood, and, fed up with Hollywood interference, returned to a divided Germany in 1957, came to make his final film is not trivia. It is an integral part of the filmmaker’s life, and finds its way into this riveting, action-packed film. With the DVD, you will receive illuminating articles about Lang’s career and the history of this film: a sequel made 27 years after the second film in the Mabuse trilogy, The Testament of Dr Mabuse.

Though based on the novels by Norbert Jacques, the first two Mabuse scripts were written by Lang with his second wife (1922-1933) Thea von Harbou – who also co-wrote Lang’s most revered masterpieces, Metropolis and M. When Lang left Berlin, they divorced and von Harbou stayed behind where she continued to write scripts.

Inspired by such villains as Dr Fu Manchu and George du Maurier’s character Svengali, Jacques’ psychopathic villain is not only a devious master of disguise, – including a Terminator-like body transference superpower – but also of telepathic hypnosis. Mabuse’s mind control through hypnosis is ridiculous, of course, but you do not watch Dr Mabuse films for their plots.

You will watch The Thousand Eyes of Dr Mabuse for just about everything else – a part a couple of actors forced upon Lang by his producer. The opening scene, however, will have you gripped, and willing to sit through a rapid succession of talky, two-minute scenes that are confusing. Relax: everything falls into place, and what follows is an irresistible mix of genres: detective; film noir; supernatural murder mystery and a James Bond movie. In fact, the unusually clever detective, Inspector Kras (Gert Fröbe, hamming it up) was cast as Auric Goldfinger in 1964’s eponymous Bond film. We are reward though with enough twists, turns and shifty characters to keep us guessing right to the end who can be trusted.

The man hunt kicks off when a prominent television news host, Peter Barter, is killed by a hitman in a limousine while driving to the TV station. Lang had read about a US experimental airgun with a steel needle invented by the US military that leaves no trace and gives it a prominent place in the film.

This incident was predicted, but alas too late, and too vaguely for Barter. One of the strangest characters in the film is Dr Cornelius (Wolfgang Preiss – who also plays Dr Mabuse), a blind psychic with a protective guide dog and an office decorated with signs of the Zodiac. At first, Inspector Kras is sceptical of the psychic and actively avoids him. But when, during a contrived séance to trick the suspects, Dr Cornelius predicts an assassination attempt, Kras feels he owes him his life.

So, who are these suspects? Henry Travers (a badly cast Peter van Eyck) a suave, caring American working under an alias for the State Department, who saves a suicidal Marion Menil (Dawn Addams) from jumping off the Hotel Luxor. Travers falls in love with Marion, the film’s femme fatale. Marion seems to reciprocate Travers’s feelings, but she married to a brute with a club foot – who we suspect is Dr Mabuse. The cunning hotel manager, Mr Berg (Andrea Checchi, excellent) is not an obvious candidate, but Hieronymus B Mistelzweig, conspicuous for his name alone, certainly is. Mistelzweig is a creepy and omnipotent insurance agent, who holds court at the bar of the Hotel Luxor, one step ahead of Kras.

Lang reserves his favourite toy chimpanzee for Mistelzweig. The insurance agent enters the Hotel ballroom with the chimp and presents it to his delighted date – one of Kras’s undercover agents. In his article on Lang that accompanies the DVD, Philip Kemp calls it “a throwaway moment of surrealism, suggesting that Luis Buñuel’s admiration of Lang was not un-reciprocated.”

Lang adds another rich layer to The Thousand Eyes of Dr Mabuse with The Hotel Luxor and its ties to the Nazis, who laid the Hotel’s foundation stone in 1944. Over the years, we learn in one of those early short scenes, in a number of unsolved crimes the victim stayed at the Hotel. In addition to a soundproof basement, there is a room with a two-way surveillance mirror, a set-up that might have inspired those used in the 2018 Bad Times at the El Royale.

Although Lang’s 20-odd year career in Hollywood was not without problems, he had considerable success in the 40s with his Film-Noirs, such as Woman in the Window and The Big Heat and powerful anti-Nazi thrillers, including Man Hunt (1941) and Hangmen Also Die (1941).

But the coercive surveillance state suggested underpinning The Thousand Eyes of Dr Mabuse must be seen as that of post-war Germany, with the German Democratic Republic’s (East Germany) infamous Stasi. Their tactics were at the heart of Henckel von Donnersmarck’s chilling masterpiece The Lives of Others (2006). If Lang left Nazi Germany because of his Jewish heritage and condemnation of The Testament of Dr Mabuse, he was under no illusion about the situation in East Germany when he made The Thousand Eyes. Although he appeared as himself in Jean-Luc Goddard’s Le Mepris Lang, nearly blind, never made another film. He is buried, not in Vienna or Berlin, but in Los Angeles.

You can order the film direct from the Eureka Store by clicking here.

The first print run of 2000 copies will be presented with a Limited Edition O-Card Slipcase.

You can read our review of Bad Times at the El Royale here.