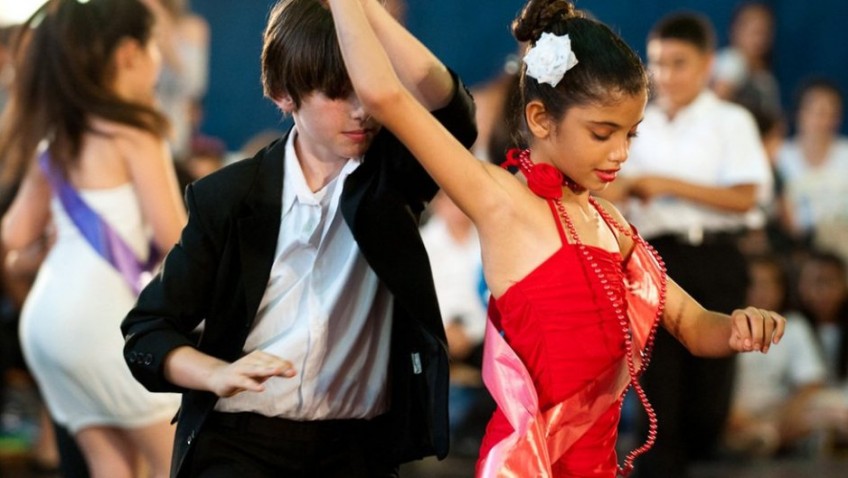 A film that might dance its way into your heart

Hilla Medalia’s moving documentary, Dancing in Jaffa opens with sublime footage of a man and woman dancing. The choreography is a combination of ballet and ballroom dancing, or show dancing.  That man is Pierre Dulaine, now 71, the subject of the feature film Mad Hot Ballroom and a documentary entitled Take the Lead.  The woman is his dance and business partner, Yvonne Marceau. The two are four-time winners of the Professional Ballroom Championship and, in 1994, founded Dancing Classrooms, an initiative that has so far taught 400,000 New York City children ballroom dancing.

Today Pierre is a New Yorker, but in 1948, when he was four, his family (Palestinian mother/Irish father) escaped Israeli occupied Jaffa and after traumatic attempts to settle in Egypt and Jordan, eventually moved to Birmingham where Pierre started to dance at age 14.  Dancing In Jaffa documents Dulaine’s return to Jaffa for the first time since 1948, where he hopes to give something back to the community of his roots.

There have been several documentaries made of attempts to bring together ordinary Palestinian and Jewish-Israeli children, the most high profile being Daniel Barenboim’s West-Eastern Divan Orchestra based in Seville.  Medalia is aware of this and focuses on how Dulaine’s initiative impacts on the lives of three fifth grade students as well as on his own life.

A Palestinian liberation protest march reminds Dulaine of the entrenched animosity that divides the city where Palestinians are Israeli citizens in name only.  Dulaine’s attempt to visit the house of his early childhood is met with threats of violence from the Jewish owners who believe he has come to reclaim it. And in the five schools Dulaine visits he realises that he faces a hurdle as daunting as this entrenched prejudice. He finds that the Palestinian boys and girls refuse to touch one another, a taboo later reinforced by an adult guard who refuses to shake Yvonne Marceau’s hand.

Noor is a Palestinian-Israeli girl whose mother converted from Judaism when she married a Palestinian man.  Now a widow, Noor’s mother has recently lost her job and Noor, a social outcast who acts out and is failing at school, weeps at her father’s grave.  When Dulaine chooses Noor as one of 84 students to compete in the final dance competition, her life changes.  She makes friends with a Jewish girl, Lois, does better at school and turns her negative energy to dancing.  Dulaine spots her talent and visits her at home, becoming a kind of father figure for a young girl in need of self-confidence.

Alaa is a shy, small Palestinian-Israeli Muslim boy who lives in a shack in a neighbourhood that is undergoing gentrification. He helps out his father, a fisherman.  In the competition, he is partnered with Lois, a pretty, blue-eyed Jewish twin who is the product of artificial insemination. Her lively mother, decided to have children without a husband and thinks nothing of explaining to Lois’s friends how this is done.  Lois’s unusual status seems to have made her more open to a dialogue with Alaa, who eventually invites her on his father’s boat.

Perhaps because of the particular challenges in filming at the five schools over the ten-week period we are not as clear as we would like to be about who is dancing with whom.   Alaa says almost nothing, while we know nothing  of Noor’s partner.  Dulaine’s particular ‘method’ of teaching is not explained, as all we see are snippets of various sessions that look like any dance class.

Nonetheless, there are beautiful moments in this entertaining film, as when the still-sceptical boys meet the woman from the old footage, Yvonne Marceau, and applaud her and Dulaine as they dance for the children some 35 years on.  The children’s eyes are filled with wonder at the sight of these two Seniors dancing so gracefully, and we realise that they have seen professional dancing before.

Equally moving is the sight of Muslim women, a few in Niqab, filming their children dancing with Jewish partners and conversing with Jewish mothers in the crowded, high-spirited auditorium.

When a Muslim boy asks Dulaine if he is married to Ms Marceau the children giggle when Dulaine tells them that you do not have to marry people you dance with.  The fact that Dulaine has never married might raise a few eyebrows in a homophobic culture, but this, thank goodness, is one prejudice that we do not have to deal with in Dancing in Jaffa.