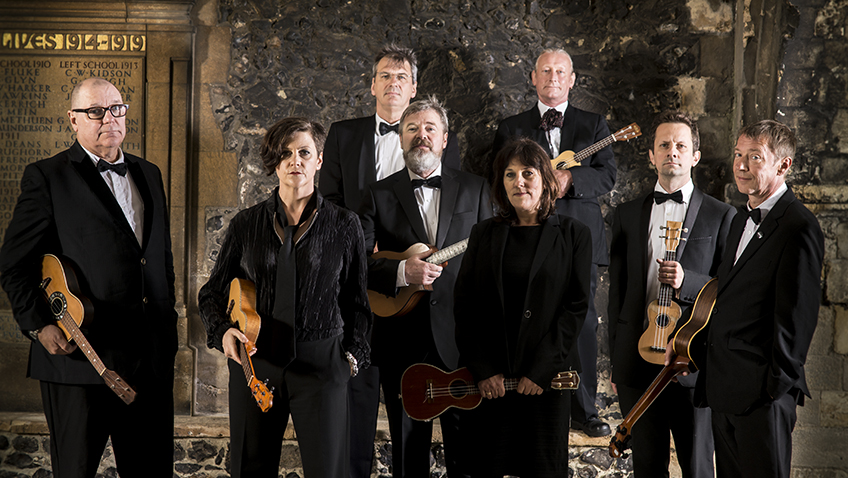 The Ukulele Orchestra of Great Britain never fails to charm

It finished with a standing ovation full of warm appreciation and smiling delight. Well, of course! This was The Ukulele Orchestra of Great Britain.

When This Lousy War is Over is a concert commissioned in 2014 to explore and celebrate the music of WWI. Ukuleles, after all, were all the rage in the first world war years, spreading through Europe after being introduced into the US. Small enough to fit in a kitbag, they provided a bit of anti-depressant music-making for those far from home and loved ones.

This year, to mark the centenary of the end of those terrible years of slaughter, a line-up of seven of the ukulele orchestra’s pool of superb musicians bring the show to the stage. As expert hands showcase the stunning musicality of the humble uke, songs and instrumentals flow, travelling from deeply poignant to frivolously jolly, from horror at the Front to laughter in the music halls. Innovative arrangements of music from various of the hundred countries involved in the war ring exciting changes in mood, tone and texture, players taking turns with introductions, comments and quips. Suffragettes, anarchists, pacifists, poets and rough, regular soldiers are all given voice in a grand variety of fascinating instrumentals, audience sing-alongs, vocal solos, harmonised duets from Leisa and Hester, full, magical a capella moments and even a spot of bass-man Jonty’s famous whistling. Some numbers are universally known; others present exciting, new narratives.

As Colonel Bogey marches off (evoking WWII, perhaps, but written in WWI) the ‘F’ word straightaway crops up. That ‘F’ word is Formby. It’s not Formby junior, though, but his equally daft dad George Formby senior who had his little ukulele in his hand for Plink-Plonk (Funiculi Funicula) in 1916. The Maori song Now is the Hour reminds us New Zealand sacrificed more soldiers than anywhere relative to population, while, in rousing style, Peter Brooke Turner (a colossally big bloke in smart suit and bow-tie strumming a ridiculously teensy-tiny ukulele) points out that Snoopy who fought the Red Barron was a Canadian airman before he became a beagle. We visit Waikiki Beach, contemplate Wild Geese through the eyes of a German poet, look for a German band, and share the magic of a brief Christmas truce at the Front in a bilingual Stille Nacht/Silent Night. Ben Rouse and Nick Browning ring out crisp, beautiful melodies on multiple instruments, one entrancing piece coming from China, another, underpinned with fabulous bass, from Africa, while the folksy, very English Banks of Green Willow commemorates a great talent prematurely lost when composer George Butterworth died at the Somme.

In contrast, music hall laughter takes us From Marble Arch to Leicester Square, tells of Oh, Oh Antonio and his ice-cream cart and relates the unlikely tale of a pair of voluminous Lavender Trousers. Roses bloom, naturally, in Picardy before we pack up our old kitbags and travel a Long Way to Tipperary, while those famous WWI ditties If you Want to Find the Sergeant and When This Lousy war is Over finally give way to a jazzy encore of Hold That Tiger, played at breakneck, blurry-handed speed, especially by Will Grove White.

A war theme, of course, does make for a concert that’s somewhat less wide-ranging, carefree, elaborate and outrageous than the group’s regular shows, especially when the playing and dry wit of George Hinchliffe is not in the mix, but, as ever, with its polished professionalism and beautiful blend and interweave of musical expertise, the much loved phenomenon that is The Ukulele Orchestra of Great Britain never fails to charm.

Next stops: Durham, Milton Keynes and to Birmingham Town Hall (who commissioned the show.)