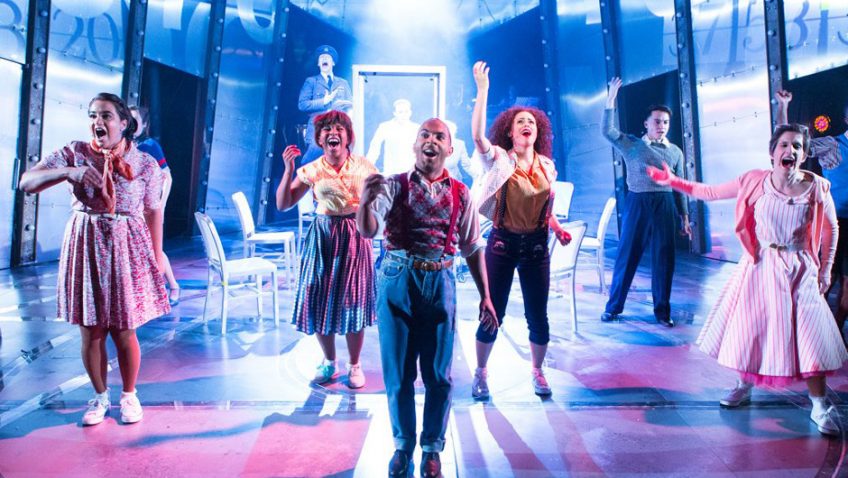 A show that finishes with a standing ovation from an audience thats longing to watch it all over again right there and then, is a very special show indeed. Massively magnificent, this 2017 production of The Who’s rock opera musical ‘Tommy‘, directed by Kerry Michael, is so passionate, so devastatingly powerful, it draws the audience right inside its emotions, right inside the pulsating music.

It was in 1969 that The Who released this first concept album in which Pete Townshend’s vibrant songs tell the story of young Tommy. 1975 brought Ken Russell’s big screen phenomenon while a 1979 London stage version was revived and revised in the nineties. This Ramps on the Moon production draws all those together in a new creation of unique brilliance. It may start gently and the story may flag slightly before the finale, but stunning musicianship, frisson-inducing singing, poignant acting, energetic choreography, and a beauty of lighting and staging all work together to astound. Performed in a surround sound of exhilarating excitement, Townshend’s inventive, pulsating decibels and haunting melodies blow all metaphorical socks right off and into orbit.

From start to finish pounding drumbeats from the onstage band vibrate in chests as the guitars of Tony Qunta and Steve Simmonds wail and weave special magic. Enhancing the richness of both sound and spectacle, cast members showcase their considerable musical talents on an array of brass, woodwind and percussion instruments, effortlessly integrating polished music performances with acting, singing and dancing.

The moving drama unfolds as little Tommy Walker’s WWII RAF father, missing in action and presumed dead, returns home years later to surprise meetings, first with his son, then with his wife Nora’s new man, Frank. When Frank kills Captain Walker in a scuffle its witnessed in a mirror by little Tommy. Told emphatically to forget all he saw and heard, forbidden to speak of it, the traumatised boy becomes a ‘deaf, dumb and blind kid’ and a vulnerable target for bullying and abuse. His destiny to become a worshipped celebrity pinball wizard is sparked by the pinball gift from his father, a father whose spirit fills Tommy’s head and whole being from now on. In pristine white, the dead Captain Walker (Max Runham) is hauntingly ever present on stage, imploring his boy lovingly, ‘See Me, Feel Me, Touch Me, Heal Me.’

With touching sensitivity but scarcely a word, William Grint conveys Tommy’s isolation and insecurity, his bewilderment and emotional turmoil, his anger and his tenderness. Touchingly tender, too, is Donna Mullings as loving mum Nora, her alter ego enacted in magnificent style by Shekinah McFarlane with her oh, so magnificently strong, expressive, soulful singing and acting. School bully Cousin Kevin is wickedness personified thanks to fine singer/dancer Lukas Alexander while horrid Uncle ‘Fiddle About‘ Ernie, Tommy’s abuser at home, is played less overtly wicked by Garry Robson but still gets booed at the end.

The keen quest to cure the boy takes Alim Jayde, in fine voice as step-dad Frank, from the ignorant, crude treatments of doctors to the Gypsy, the astounding Acid Queen, a diva made monumentally out of this world thanks to Peter Straker, his colossal vocal expertise and impact earning loud applause decades after he first appeared in the original show. To everyone’s delight, he’s back in Act two with a new song, penned specially by Pete Townshend himself.

The sheer beauty of colour-changing lights along walls, chairs and floor is reflected (literally) in the set’s beautifully angled silver metal panels, moveable walls that serve as Tommy’s mirror and upon which changing graphics are projected, pictures at the outset reminding us of the effects of recent disability benefit cuts. Indeed, with so much going on, it’s hard at times to keep your eyes on all the balls at once, which highlights, perhaps, how doubly confusing and bewildering the world is for someone like Tommy.

Thanks to the likes of Becky Barry, Amelia Cavallo and Natasha Lewis, the whole ensemble moves in colourful whirlwinds of energetic singing, dancing and music making and yet theres still another unique dimension feeding into all this richness and brilliance. The entire show – Neil Irish’s set, Mark Smith’s clever choreography and all – integrates both disabled and able-bodied performers equally. Those who bring the characters to life, both major and minor, may be deaf, blind or sitting and dancing in wheelchairs. While the harmonious voices of Julian Capolei and Matthew Jacobs-Morgan sing for Tommy and Shekinah McFarlane’s mighty voice for Nora, signing is cleverly incorporated throughout and sur-titles sparkle above. Also audio described, the show provides for a segment of audience so often neglected.

In a show that encourages us to consider the treatment and opportunities of people with disabilities, the performers conclusively demonstrate that, when it comes to inspired exuberance and to the excellence and variety of their talents and abilities, they are all second to none.