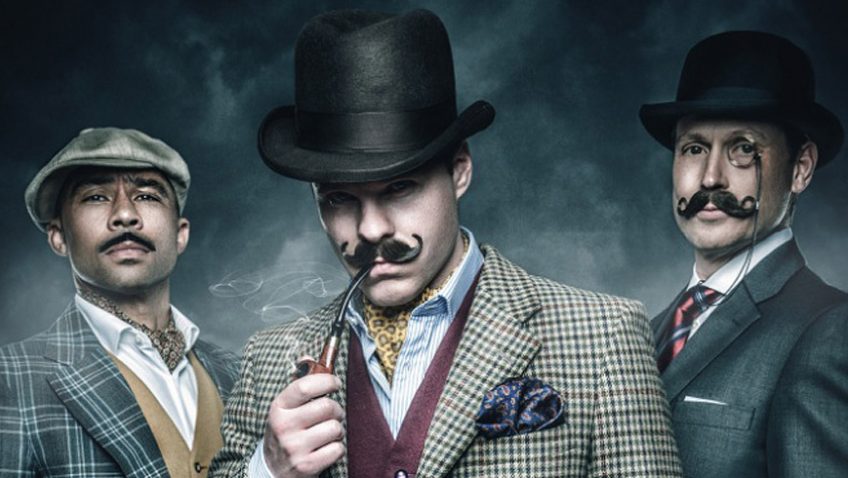 So many distracting, detracting comic elements constantly cutting across songs

Crooners are a dying breed. They’re even on the endangered list. The laid-back likes of Bing Crosby, Sinatra, Dean Martin and the velvet-toned Matt Monro are all long gone. So can the species be saved from total extinction? As the hushed tones of a spoof David Attenborough outline this very plight, the audience titters appreciatively. The answer might just be a breeding programme. So, then, the remaining crooners must find themselves mates. And this is the premise upon which the Crooners show is based.

Onstage, hard-working co-script writer, director, co-producer and co-choreographer, Roman Marek performs alongside Phil Barley and co choreographer, additional director and former footballer Jim Whitley. Taking on the personas of Charlie, Roland and Winston, endangered, moustachioed crooners in search of mates, the three, who have worked extensively in the past in musicals and TV, as Rat Pack impersonators and/or recording artist, pour an onslaught of comedy into a repertoire of singing, dance and impersonation.

Throughout, the Mini Big Band – immaculate, stylish, superb in their laid-back elegance and musical eloquence – provides swing jazz accompaniment. Founded by Chris and Jon Hibbard (directing from sax), the players create a sound so big, polished and exciting, it’s a shame the unnamed players of the three saxes, two trumpets, trombone, drums, double bass and piano don’t get to let loose in big numbers all of their own! Still, they do appear genuinely amused by all the goings-on of the three singer/comedians. Orchestration (or, as the programme has it, orchastration) is by Phil White who’s no doubt hoping a proofreader arrives soon!

Beneath the chandeliers, the crooners sing, impersonate the greats, tap-dance (Jim Whitley proving nimble-footed even without a football) and clown about extensively in a variety of period outfits from posh bowlers to straw boater, smart sport’s jackets or suits to stripy Victorian swimsuit, from vest to bare top, and always in their three slippery trademark moustaches that seem keen to knock off early.

The show’s (slim) theme of searching out mates stretches from start to finish, much of the comedy built round it. Gentle, clever jokes, less clever jokes, neat routines, unsubtle slapstick and cruder elements all draw laughter and applause from different segments of the audience, though the more pc-minded are, no doubt, constantly wincing. In a show where audience participation and interaction play a big part, Roman Marek’s energy and charm make for great audience rapport, while heckling females in hen-party mode raise laughs and winces all of their own as they elicit responses from the stage.

With its broad, interweaving range of elements, this is a variety of variety show that’s never quite one thing or another. While comedians like Ken Dodd turn comedy right off when singing serious songs, gifted crooners like Dino interspersed heartfelt singing with odd jokes and anecdote. While Sammy Davis Jr would dance magnificently and throw in physical comedy between serious singing stints, the two Ronnies went for high comedy in their songs. Crooners, it seems, wants to broaden out audience appeal from that offered by a performance of Rat Pack impressions in simple strings of songs. It must be said, though, that, with so many distracting, detracting comic elements constantly cutting across songs, the mood and sentiment of those great classics can rarely blossom fully enough to weave any special magic. All the same, a good few were moved to stand for the final applause, having thoroughly enjoyed this particular mix of song and comedy.