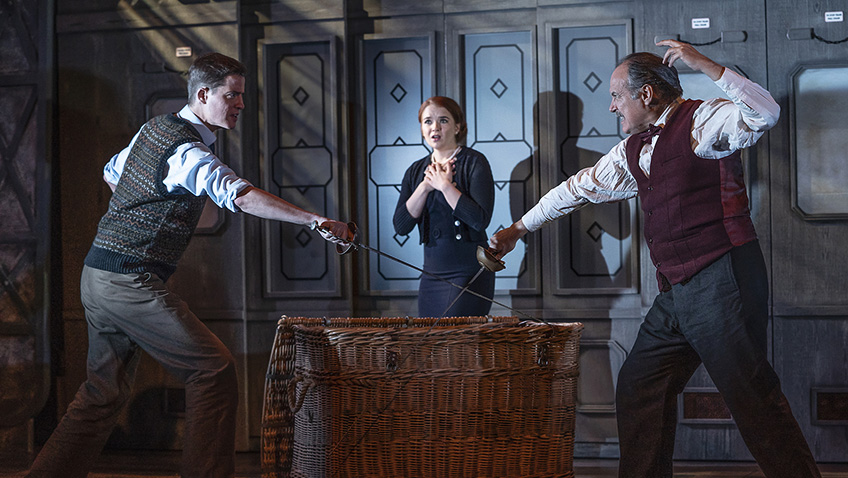 The lady first vanished in 1938 in Alfred Hitchcock’s classic black and white movie thriller in an atmosphere of suspense, surprise and chilling intrigue. This production of Antony Lampard’s stage adaptation from The Classic Thriller Theatre Company delivers some of that suspense, surprise and intrigue. However, warmed through far more extensively with comic badinage and a main man who’s more lanky twit than manly hero, it does lose that seriously brittle chill. 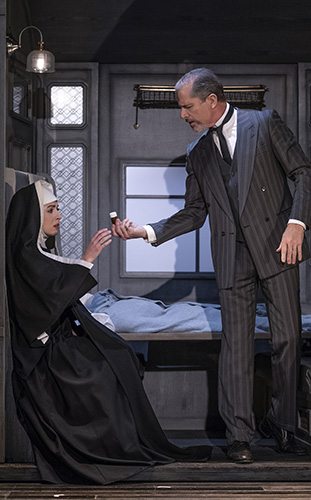 Natalie Law and Maxwell Caulfield in The Lady Vanishes

Its balance of light comedy with a build up of intrigue actually works nicely through the first act. In the second, though, there are times when it just doesn’t. A fight scene in the baggage area certainly falls between two stools: it’s not sufficiently funny and exaggerated to be properly comic yet not polished enough to be seriously frightening or gripping. Likewise the grand climax brings a noisy, overblown, overlong gunfight at the OK Corral that’s dotted as much with merry quips as Nazi brutality and dead bodies.

Yet overall it’s still a very enjoyable piece and the set is wonderful. As Wagner’s insistent Ride of the Valkyries takes off into the ether we’re thrown straight into a fog of steam and noisy bustle at a splendid Austrian railway station. Imposing Third Reich eagle and swastikas hang beneath its impressive arched structure, with fabulously crafted perspective lending breathtaking 3D depth to the building. All neatly converts into the compartments of a corridor train where most of the action takes place.

The spoken German of the booming announcements is admirable, Mark Carlisle multi-tasking as Austrian stationmaster, London porter and the caricature Italian magician Signor Doppo, while Natalie Law comes and goes, too, as hard-working waitress, loud American and debatable nun. The relationship and attitudes of young Iris (Lorna Fitzgerald) and Max (Matt Barber) in the main roles are not the clipped, polite and formal ones of the thirties. In fact, Max proves particularly stroppy, floppy and/or daft at times. That he and Iris fall head over heels in love is, perhaps, almost as much a mystery as the disappearance of Miss Froy aboard the train.

Longstanding actress Juliet Mills portrays Miss Froy, the ageing governess, as a restrained and genteel character of the day, complete with Harriman’s Herbal Tea, while her real life husband Maxwell Caulfield is the imposing Dr Hartz. Philip Lowrie plays a spineless though not thoroughly convincing Eric, the married barrister who’s off on the continent with self-assured Margaret (Elizabeth Payne) his “other woman”. Robert Duncan and Ben Nealon make a particularly pleasing and amusing old-style double act as a pair of laid-back, cricket-obsessed, what-ho old beans, their voices projecting wonderfully (unlike some of the others at times.)

Bounce, an engaging likeability, a big, leather-clad Nazi (Joe Reisig), a mystery to solve and a very fine set make this a generally enjoyable show.

The show goes on to Llandudno, Lichfield, Aberdeen, Glasgow, Crewe, Cardiff and Leeds.