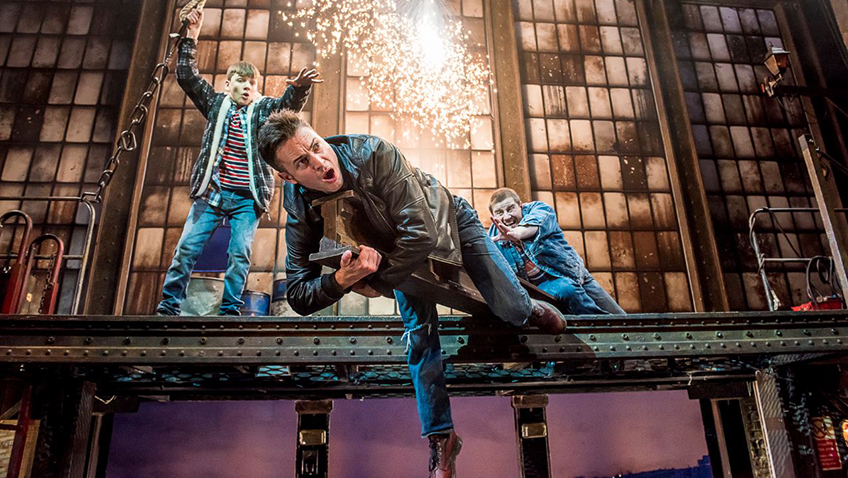 It was back in 1997 that the film The Full Monty took everyone by storm, building up to a frenzy of adrenalin-fuelled excitement that ended in a famous, blinding flash. Simon Beaufoy’s first film screenplay reached a pinnacle of perfection, filled, as it was, with brilliant humour, pathos and despair, captivating music, engaging characters and relationships, a poignant socio-political backdrop, fine acting and interesting locations.

For his 2013 stage version it took Beaufoy twenty drafts to reshape his story about desperate ex-steelworkers forced to swallow their pride and strip down to their flab to pay the bills. Coarse language, willy jokes, the Cling film bit, red posing pouches, gnomes, the famous dole queue dance and the ever-evocative strains of Hot Stuff and Hot Chocolate are all there, too. 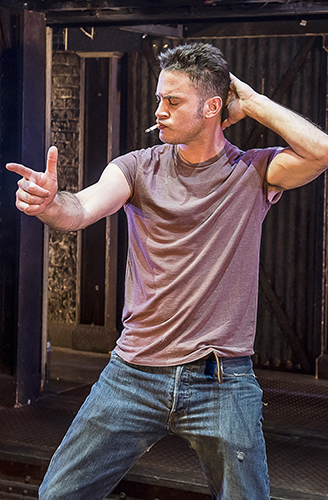 Gary Lucy in The Full Monty

But a lot of gender politics and social changes have flowed under bridges since the crushing loss of the North’s skilled heavy industry in the 80’s, that plunged entire, bewildered communities into hopelessness, humiliation and deep despair with only humour to get them through. As the rawness of those events recedes ever further back in time and former expectations of jobs for life for skilled workers are a thing of the past can the piece still work?

Once an old TV set has nicely conjured up the era’s events, Robert Jones’ admirable set takes us into a huge, abandoned steel mill with its defective, sparking electrics, loose girders and a blue crane, known as The Blue Bitch – for some reason. The magical views through the doors to a Sheffield skyline are fabulous, though the space is a rather inflexible and overpowering when it tries to take us to other locations such as Gerald’s home.

The Sheffield audience is still laughing at the witticisms and disrobings in this universal story of men and women who battle and struggle their way through adversity by attempting to offset total demoralisation with fun and humour. Their response is less whole-hearted this time, though, possibly because this production, also slightly lacking in an ease of flow, sadly lacks the essential, highly crucial charm. Though Louis Emerick as the arthritic dancing Horse and Andrew Dunn as Gerald lend their characters proper clarity and stage presence, Gary Lucy as main man Gaz seems intent on addressing his lines to the inside of his own eye-lids or to his kneecaps or navel, thereby entirely bypassing meaningful interactions with other characters. At times his delivery and diction alternate only between smudgy and shouted while his irritated, irritating slouch lacks all nuance. Without a clever, constant balance of contrasting humour and despair that brings characters and relationships alive, the piece falls short in producing the engaging poignancy and heart that should be at its centre.

That said, in the courageous flash dance finale, the Bums of Steel, who don’t even keep their hats on, are still very much appreciated.