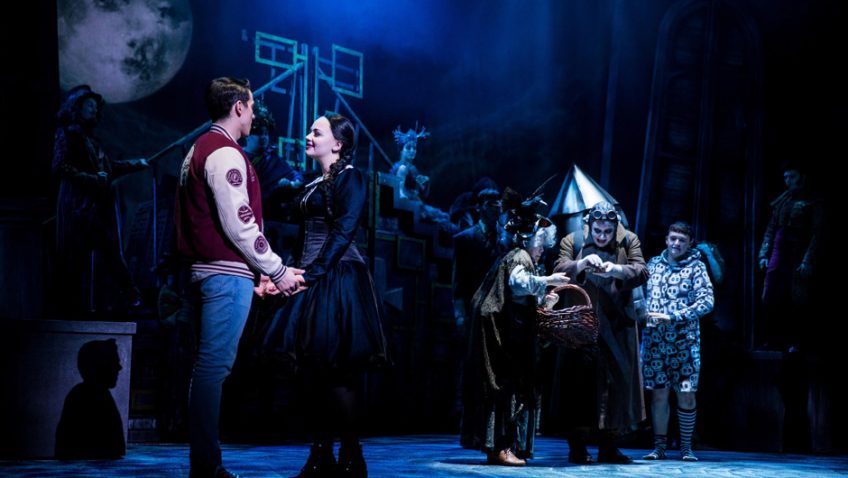 Carrie Hope Fletcher and Cameron Blakely in The Addams Family

The creepy, quirky, comical goings-on of Gothic horror family, the Addams, have been raising laughs and shudders for decades. The morbid humour of Charles Addams’ 1938 cartoon caricatures was adapted in 1964 into a long-running TV series, and then a film in 1991. But only in 2010 did the macabre comedy become a finger-clicking Broadway stage musical. It must be said Brickman and Elice’s slim storyline has far less substance than the fabulously ingenious ghosts that people the stage, and the show is somewhat slow to engage and – as it were – warm up. The story? The secret engagement of crossbow-toting daughter, Wednesday Addams, to Lucas (a ‘normal’ boy who’s, in this production, more annoying than endearing) prompts a dinner party for Gothic and ‘normal’ family to meet. Voila. That’s it in a nutshell. Still, it’s all about the characters really, and, helped by Andrew Lippa’s pleasing score, some fine songs and singing, fine musicians and Alistair David’s choreography, some of the characters do manage to draw us in.

Diego Pitarch’s elaborate, adaptable set is a thing of beauty, its blue-green greyness towering up in a lofty, wonky splendour of dilapidation, admirably atmospheric. The costumes of the wide array of ghostly ancestors are outstanding, too, likewise enhanced by shadowy lighting. Ironically, it’s the ubiquitous ensemble, with its super dancing, wafting, posing and adorning (as in the aesthetically pleasing Harry Potter-style moving portraits) and with its great singing and frequent interaction, that adds sparkle and life to the show, exemplified in the vibrant, full cast Full Disclosure number at the end of Act I. Cameron Blakely and Samantha Womack in The Addams Family

There were groans of disappointment on hearing Les Dennis was indisposed and unable to play the role of Uncle Fester tonight, but understudy Scott Paige proved a real crowd-pleasing success. With his oh, so round, whitened ‘Matt Lucas’ eunuch head, he comes up trumps in his portrayal of crazy, moonstruck Fester, touching and endearing as well as funny as he sings to the moon, in very fine voice, of his love for her, all earning him sympathy, laughs and wild applause.

Cameron Blakely’s Gomez, with young Brucie face, Spanish accent and stripy spiv suit, turns out to be quite a sympathetic character, even a bit of a softy, once his warm charm gets going, while wife Morticia (Samantha Womack) is suitably sweeping and elegant with her sleek, black hair and flowing gown, though it would be nice to see her a little more commanding.

The best singing and acting comes from Charlotte Paige as Alice Beinecke, the (seemingly) perfect wife and mother of the American 60s, smiling, caring, longing – and rhyming. Paige’s superb voice and convincing characterisation are wonderful. There’s powerful singing, too, from the popular Carrie Hope Fletcher as Wednesday, though any sense of romantic chemistry between her and fiance Lucas (Oliver Ormson) is totally lacking, alas. Another recipient of large accolades is large Lurch (Dickon Gough). Having lumbered with slow, reverberating footsteps throughout, delivering nothing but rumbling grunts, his magnificent operatic bass singing brings a special surprise treat in the finale. The ‘Thing’, played by a surprisingly delicate, disembodied, finger-clicking hand, is also widely enjoyed.

In spite of its various short-comings and a weak, protracted, corny denouement, in which all issues are resolved just as expected, the audience, swelled by far larger numbers of youngsters than most, were, for the most part, like Fester with his rocket on his back – over the moon.

Valda Aviks and Grant McIntyre in The Addams Family