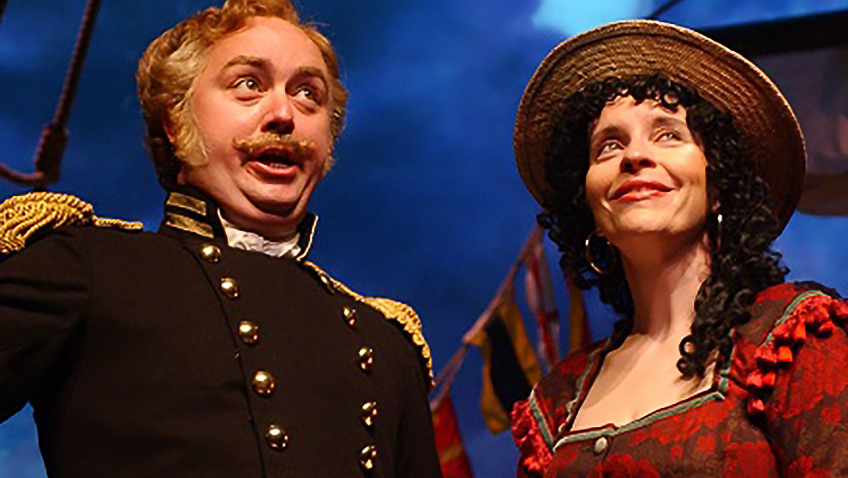 Retaining the spirit of Gilbert and Sullivan’s original

Lively, vibrant and thoroughly enjoyable, Opera della Luna’s Pinafore sails along on tides of smiles and swells of laughter. Performed with relaxed, highly polished professionalism all round and retaining the spirit of Gilbert and Sullivan’s original, hugely popular 1879 work, this stream-lined, rearranged version is delightful (though purists could feel a little short-changed.)

Clever use is made of the overtures when the stage fills with bustles of fascinating activity, the small cast of eight fine singer-actors bumped up in number by six fine musicians dressed in Jack Tar sailor suits, guys and gals alike, who come aboard to make their way to their onstage seats. Before beautiful-sky backdrops, the shabby, bell-bottomed sailors construct the set, hoisting up ropes, flags, rails, sails and rigging and adding gangplank, and cannonballs – affixed to planks! MD Michael Waldon sits at a grand piano enveloped in ropes and dangling trombone, the musicians integrating into the action from time to time.

The cast brings buoyant, enthusiastic naturalness and admirable flow to the fun, never going overboard with the melodrama and creating, for the most part, believable, sympathetic characters who interact well together. Director Jeff Clarke keeps the focus very much on the humour in the romantic entanglements and complications that arise in a world of strong class divisions. It’s these social inequalities and intolerances that William Gilbert (and Dickens, too – as reflected in this production) was keen to flag up, satirise and ridicule. Clarke subtly seizes every opportunity for creating extra comic effect and interest, and relishes, as Gilbert did, playing about with witty words and silliness. But though West Country ‘r’s’ may get rolled extensively by the lower classes, diction is always clear and strong.

Arthur Sullivan’s well known music and melodies, of course, never fail to lift spirits, set toes tapping or wring out the pathos, and the singing is splendid. Matthew Siveter’s Captain Corcoran is a commanding presence with a magnificent voice, while Georgina Stalbow’s crystal tones and well-honed, gentle humour create a likeable Josephine, his daughter, who is head-over-heels in love with low-born sailor Ralph yet set to be married off to the rich, ageing First Lord of the Admiralty, the ridiculous and successful-in-spite-of-himself Sir Joseph.

Simon Butteriss returns as wobbly, bobbly, upper-crusty toff, Sir Joseph, and what a treat that is. As he totters about like a cat on a hot tin roof, all at sea on his tender tootsies, his comic charisma sparkles with a slight hint of Ronnie Corbett twinkle (but thankfully a far finer singing voice.) Superbly played, yet not overplayed. Lawrence Olsworth-Peter lends his fine tenor tones to lowly seaman Ralph (who, it turns out, isn’t lowly at all) while John Lofthouse creates two magnificent characters in limping Dick Deadeye and Sir Joseph’s large, imposing, thickly clad aunt. Though the sisters and the cousins and the aunts are reduced to but one of each, it works well.

Martin George and Carolyn Allen provide stalwart work as Bill Bobstay and annoying Cousin Hebe while Louise Crane, another fine singer-actor, is the gypsy vendor known as Little Buttercup. Buttercup, a name commonly given to cows, is assigned here, in typical non-PC fashion, to a woman who was once a wet nurse to two babies. These she somehow managed to mix up, which meant the poor one was brought up in elevated circles (and became Captain Corcoran) while the richer born was relegated to the lowest class of society (and became downtrodden seaman Ralph Rackstraw). Whoops! But it all comes right in the end!

Full of energy and enthusiasm, this delightful production gets fewer flamboyantly outrageous adjustments than some of the other shows in the company’s repertoire. Opera della Luna’s been going strong for twenty-five years now and fervently hopes crowds of delighted audience members will keep signing up as Lunatics, Certified Lunatics, Committed Lunatics and Complete Lunatics to keep funds flowing so that future generations can enjoy their rich entertainment. Let’s hope so.