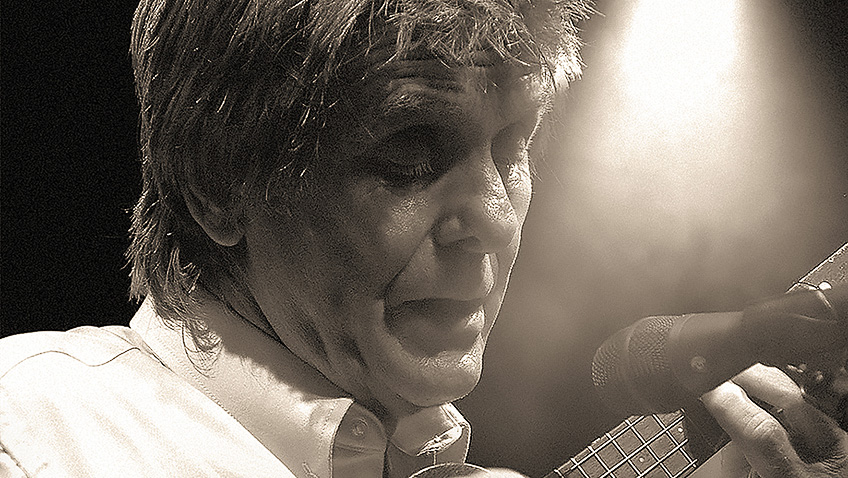 Singing his way around sell-out venues up and down the land between September and next April on his diamond anniversary tour (yes, 60 years!) comes diamond geezer Joe Brown MBE – he of the hedgehog hair, cheeky grin and chirpy Pearly King banter. And his gems still sparkle.

As ever Brown’s perky humour peppers laid-back anecdotes and reminiscences from his formidable career, while his love of playing live music shines through at every moment as he mixes and matches wide-ranging song styles with an exciting array of instruments. He delights with masterly performances on guitar, mandolin, melodeon, banjo and electric fiddle, and sometimes, of course, he has his little ukulele in his hand. He stops short of Formby but his songs and instrumentals journey through skiffle, folk, country and blue-grass, rocking on into humour, own compositions, and some of those glorious hits of the past that audiences always demand. Picture of You and ‘Enery the Eighth have the massed fans in raptures. While he confesses a love for all “the old stuff”, Brown adds to the repertoire all the time. American country and blue grass are among his favourite styles, he has a home in Nashville, where he pens and plays with friend and celebrated singer/songwriter Roger Cook (You’ve Got Your Troubles ; I’d Like to Teach the World To Sing). He includes some of those, and Gordon Lightfoot, another favourite, features too.

Linking nicely with a Chas ‘n’ Dave song Lonnie D, splendidly delivered, there’s a rattling Freight Train, a British rout to the Gulf of Mexico in The Battle of New Orleans as well as some very special instrumental treats with the likes of Buddy, Can You Spare a Dime and the very beautiful Sicilian Souvenir d’Alvito. Eager to always include a song by his great and generous friend George Harrison, Brown this time plays That’s How It Goes.

Apart from drummer/percussionist Phil Capaldi who’s been harmonically vocalising with Joe to most pleasing effect for the past 27 years, the line-up’s a new one, and Joe’s son, Sam, who was on the 50 years tour, is not on this one. On double bass and occasional guitar bass is Andy Crowdy, with Steve Simpson on guitar and folky fiddler Tom Leary displaying his fine talents primarily on fiddle. The focus throughout, though, is on Joe, so, apart from providing fine vocal and instrumental backing and odd solos, the bunch remain pretty quiet. In fact, with all performers seated right through this gig (apart from double bassist) and on a stage with darkened backdrop, the atmosphere is somewhat more gentle and sedate than previously. But the audience still very much enjoys the fine music as the evening bobs along on Brown’s cheery, bouncing, barro’-boy patter.