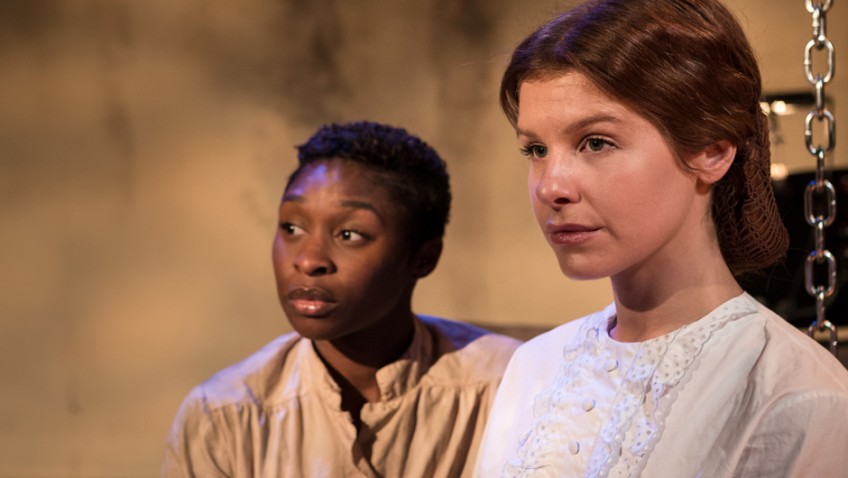 Lynn Ahrens and Stephen Flaherty base their musical, which premiered in New York in 2005, on an American novel by Sherley Anne Williams. Published in 1986, it is a story of slavery from a woman’s point of view, written in response to William Styron’s The Confessions of Nat Turner.

The novel was inspired by two historical facts. In 1829 a pregnant slave led a rebellion against the slave traders. A white woman in 1830 provided a safe haven for runaway slaves. Williams brought the two women together. Divided by prejudice, they eventually join forces and cheat the slave traders out of their money.

Cassidy Janson is cast as the white woman plantation owner who, deserted by her husband, takes a black lover. Cynthia Erivo, who scored a big success in The Color Purple at the Menier Chocolate Factory and I Can’t Sing at the London Palladium, is cast as the slave who is raped, beaten and arrested for murder.

The singing and acting is of the highest order. There are also notable performances by Edward Baruwa as the black lover and Jon Robyns as a white reporter who isn’t as charming as he at first seems.

Ahrens and Flaherty are probably best known in the UK for their musical, Ragtime. The show’s strength is the music, a mixture of blues, gospel, waltz, folk and vaudeville. The show’s weakness is the book which is all over the place. Audiences will go for the singing. There is a delightful love song, In the Bend of My Arm.

Andrew Keates, directing the European premiere, achieves miracles in a tiny space; but Dessa Rose strictly speaking needs a much larger theatre. The actors are cramped, the sight-line are not good (too much masking) and the sound engineer has not got it right. The miked singers, when they sing, are too loud and when they talk you can’t always hear what they say.