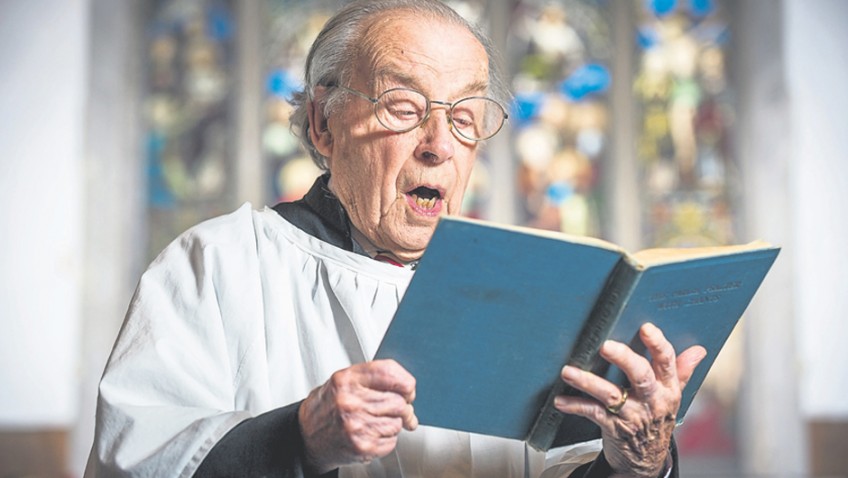 Dennis joined his local choir back in 1927 aged just seven, and still sings for them every Friday.

Dennis, originally a treble in the choir, claims it’s the 43,000 hymns and over 4,300 choir practices over the years that have kept him feeling young.

“It keeps me going, and I have quite an active lifestyle where I am out involved in music almost every day of the week.

“I really enjoy it. I still write music now but it takes me a bit longer than it used to – I have to think of something for inspiration.

Dennis says a piece can sometimes take weeks to write but he still thoroughly enjoys being involved in the choir  where they sing up to 10 hymns every practice.

He became the organist at the age of 15 after the vicar had a row with the incumbent organist who stormed out. The job was left open for Dennis who had been practising at the church.

He stayed with the church up until 1939, and worked for his father before joining the RAF.

After leaving the RAF Dennis decided to follow his dreams in music – and turned down his office job, much to his father’s disapproval.

He attended Cambridge University as an associate in music at Fitzwilliam College, and also studied music composition at Trinity College, London.

Dennis was inspired by a famous pianist he met while in Cairo, Egypt during the war who told him that music was his future.

“The pianist asked if I played. I said I was an organist. She told me she had lots of music for two pianos and asked if I would play with her,” said Dennis.

“I said ‘I would love to but I can’t match your standard’, but we played for an hour, it was out of this world.

“She asked what I do back home, and I told her I work in an office with my father. She said

‘you’re in the wrong job, get into music when you get back’.

“Those words have lived with me forever.”

After getting his degree in 1950, Dennis became a director of music at various different jobs around the Cambridge area.

Sadly, Dennis lost his wife Muriel to colon cancer when she was in her 80s, and his only son, Martin, died from the same disease when he was just 37.

But Dennis said: “My doctor told me, ‘you’ve got a lovely flat but don’t sit around and mope – get out, meet people and do things’.

“He said ‘you’re healthy, you can do it and you’ll probably last quite a long time’.

Francis Knights, Director of Studies in Music at Fitzwilliam College, said Dennis has even kindly donated gifts to the college.

He said: “Dennis has been a very active and generous supporter of music, and of the Chapel Choir at Fitzwilliam College for many years. Our singers and music students have really benefited from his encouragement and gifts.

“He recently donated new robes for the choir and previously donated his three-manual Viscount digital organ.

“In the past few years the Choir has given premieres of some of Dennis’ compositions, and he has always been most willing when we have asked him for new works.”