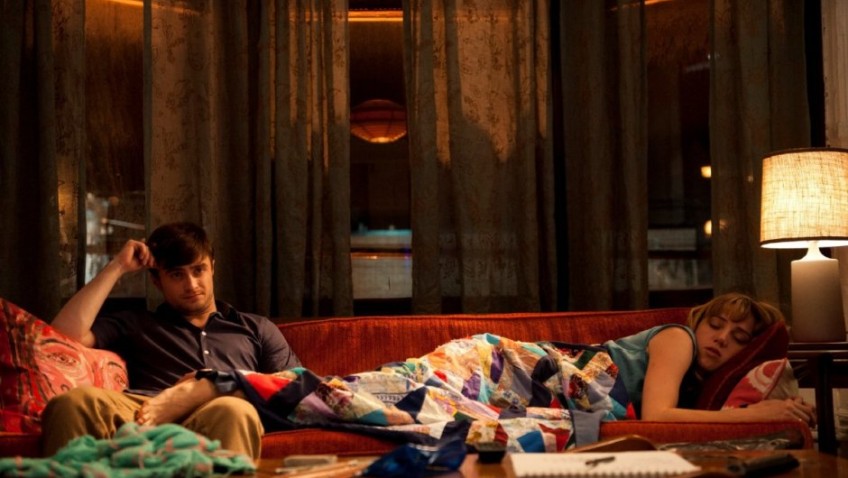 WHAT IF (Entertainment One). What if love is stupid? You have to hand it to Daniel Radcliffe. He has done everything he can to distance himself from Harry Potter, stretching himself, trying different genres on stage and film. Now he attempts ROM com. He falls in love with a girl (Zoe Kazan) who already has a long-time boy friend. Can they just be platonic friends? It’s sweet, it’s cute, it’s light, the banter is easy, but it’s also a bit mean to cast Adam Driver, who is 6 foot 2 inches, as his best mate.

THE OVERNIGHTERS (Dogwolf). People are flocking to North Dakota in search of jobs in the oil fields. They have nowhere to sleep. A Lutheran pastor opens up his church, his parking lot and even his home to the homeless and jobless. His judgement and Christian charity are called in question. Compassion and forgiveness are thin on the ground. The local community is unhappy and he starts to lose his congregation.  Will he be hounded out of his ministry? Jess Moss’s absorbing documentary, a parable with drama, has a brave and shock ending.

ENEMY (Fusion) is a slow-burning, existential mystery thriller with no ready answers. Chaos is order un-deciphered. A history professor, whilst watching a movie, discovers he has a Doppelganger, an actor. He tracks him down. They are physically the same (so we get two Jake Gyllenhaals for the price of one); but they have different characters. They swap roles and sleep with each other’s girlfriends. Director Denis Villeneuve gives the film a washed-out, dead, never-quite-real look. Obscure and confusing, it’s some sort of sexual fantasy; and it’s bound to become a cult movie.

THE WAY HE LOOKS (Peccadillo) is a gentle little film, sensitively acted, about Brazilian teenagers coming of age and coming out.  A girl (Tess Amorim) is upset when her best friend (Guilherme Lobo), a blind boy, becomes fond of a boy (Fabio Audi) she fancies. A tender relationship starts to develop. Daniel Ribeiro’s touching drama is so sweet and so gentle there is no drama as such; and since there is no sex it could hardly be more innocuous. Lobo, who is not blind, is totally convincing as the blind boy.

THE GREAT MUSEUM (Match). Director Johannes Holzhausen goes behind the scenes of Vienna’s Knisthistorisches Museum and observes the directors, curators, restorers and workers doing their daily job, looking after the art treasures. The actual building is vast. There are no interviews, no commentary, only observations of sit-ins at meetings were financial worries and identity worries are discussed. Watch this film, and you will want to book a flight to Vienna.

THE TURNING (Soda) is nine short stories by Tim Winton. Nine directors and nine different casts produce nine vignettes of Australian life. Adults jump into a swimming pool fully clothed. A son is reunited with his dad. A young bully drowns. A battered wife finds Jesus. A girl burns down her home. Two very young Aborigine boys imitate Cain and Abel. An introverted boy plays with a loaded rifle. A number of people talk about a criminal they once knew. A long-term male friendship ends. These tiny films, mere tasters, neatly done, without any development, were part of a larger Australian TV series and they might well appeal to Australians.

THE TARAMIND SEED (Network). Here’s the usual Cold War game of spies spying on each other, circa 1974. Can the Russian agent bed, blackmail and persuade a very nice and very correct English Home Office secretary to spy for the Russians. Omar Sharif has bags of charm and loads of sex appeal. Julie Andrews is in it only because her then husband, Blake Edwards, was directing. There’s not enough chemistry, tension and comedy for the film to really work. There is no sex, either.

SCOOP (Icon). This Woody Allen film dates from 2006. A student journalist (Scarlett Johannson) joins forces with a third-rate magician (Woody Allen) to track down a serial-killer (Hugh Jackman) who might or might not be a serial killer after all. She falls in love with him, anyway. It feels like an old-fashioned late 1930’s early 1940’s comedy thriller but without the wisecracks. Woody wisely acts his age and plays “father”  not lover to Johannson.

MAGIC INTHE MOONLIGHT (Warner). However poorly they do at the box office, Woody Allen can still get the money to make movies, Actors fall over themselves to be in them. His latest souflë is set on the French Riviera in the late 1920’s. A well-known magician sets out to expose a successful medium as a fraud. Allen has been reported as saying that he never sees any of my films after they’re finished, ever.  If he did, he, too, might, be disappointed by the lack of funny scenes and the lack of chemistry between Colin Firth and Emma Stone.

THE LEGEND OF THE LONE RANGER (Network). Why is he not wearing a mask? (The Lone Ranger without a mask is like Cyrano de Bergerac without a nose.) Can the Lone Ranger save the President of America from being murdered?  This attempt to revive the Western legend in the 1980’s was a commercial disaster. The running commentary is naive. The acting is poor; so poor, Klinton Spilsbury had to be dubbed (and was never heard of again). The stuntmen have the most fun. The music is circus level.

PALO ALTO (Metrodome).The question is do you want to watch unappealing teenagers behaving like unappealing teenagers, hanging out, partying, swearing, smoking, having sex, and doing community service? My guess is you probably don’t. The adults come out of it badly, too.