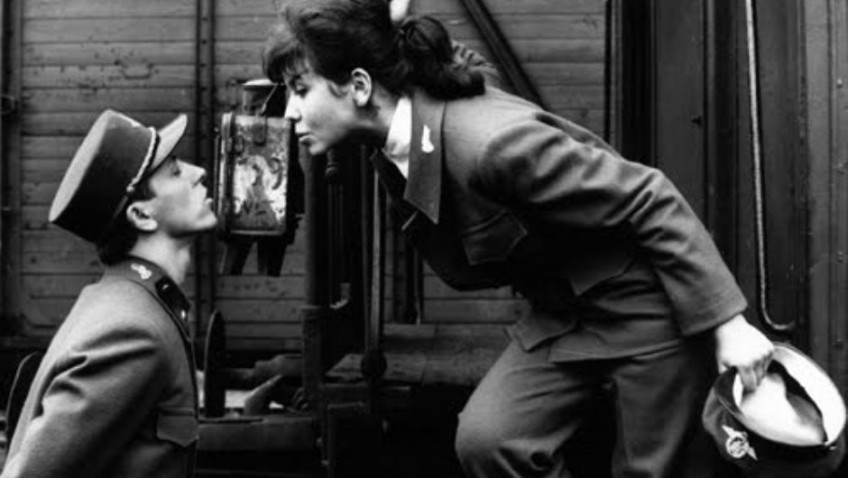 CLOSELY OBSERVED TRAINS (Arrow). 28-year-old Jiri Menzel’s 1966 Czech film, which won an Oscar for Best Foreign Film in 1968, is set at a village railway station during the German occupation in World War 2 and is a mixture of comedy and gentle satire and then tragedy.

An innocent, shy and somewhat premature teenage railway trainee (Vaclav Neckar) is keen to lose his virginity. He is helped by an attractive member of the Resistance. The most famous scene is when a station assistant rubber stamps a girl’s buttocks and thighs with a variety of logos, to the outrage of her mother but to the pleasure of the girl. Czech it out.

RAGING MOON (StudioCanal) is a love story that didn’t do as well at the box office in 1971 as it should have done. Two paraplegics, wheelchair bound, fall in love in an institution run by the Church for the disabled. The governors and matron object to them having sex. Malcolm NcDowell is the working class lad, angry, bitter and sullen.

Nanette Newman is the middle class woman who brings out the best in him. Bryan Forbes, scripting and directing, keeps a firm check on the sentimentality and gives the smug do-gooders a critical once-over.

SOUTHPAW (Entertainment in Video). The only original thing about this cliché-ridden boxing film, directed by Antoine Faqua, is that nice, gentle Jake Gyllenhaal is playing a brutal, snarling and overwrought boxing champion, who has very poor anger management and goes berserk when his wife is killed in a brawl.

When his life reaches rock-bottom a kindly boxing trainer (Forest Whittaker) offers him a job as a cleaner and then trains him for a knockout comeback in slow motion.

THE PHYSICIAN (Arrow) is an old-fashioned, plodding, two-and-a-half hour German epic set in the 11th century which jumps from incident to incident in such a jerky way that, paradoxically, the scenes always feels rushed.

A young Englishman (Tom Payne) decides to study medicine with the great Persian scholar Ibn Sina (Ben Kingsley) in Isfahan, a hazardous journey. Since Christians are usually murdered he circumcises himself and passes himself off as a Jew and participates in some gruesome operations during which you may want to shut your eyes.

Philipp Stoelzl’s film, a mixture of anatomy lessons, plague and war, is very trivial. The love story is perfunctory, uninvolving and totally unnecessary. The high spot is the photography in the desert

ROBINSON CRUSOE ON MARS (Eureka) directed by Byron Hoskins is a 1964 SF film which ludicrously boasts to be scientifically authentic.  It failed at the box office 50 years ago. American astronaut, without water and oxygen, and all alone except for a monkey, meets an Ancient Egyptian Man Friday and alien warplanes.

The film suffers from a naive and boring script, a lacklustre actor (Paul Mantee) in the lead role, plus poor special effects and cardboard sets. It is at its best when the astronaut is just walking in California’s Death Valley (standing in for Mars) and dwarfed by the awesome surroundings.