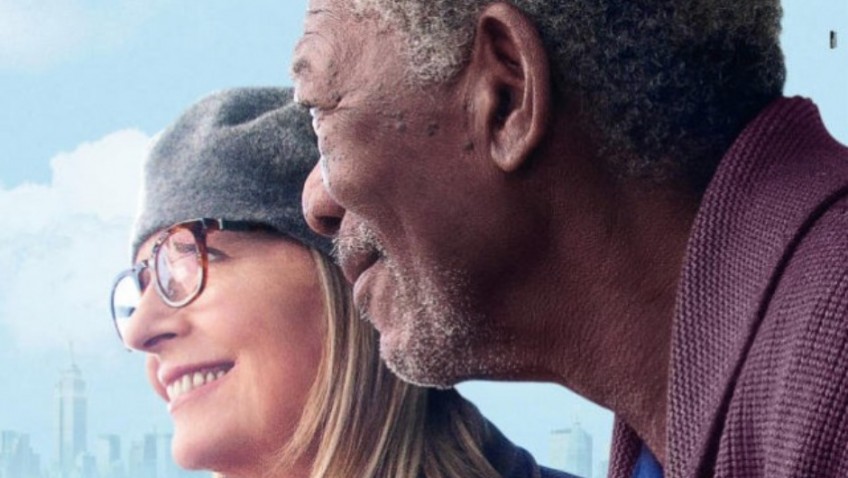 RUTH & ALEX (Signature). Elderly couple, married for forty years, living in an apartment block without a lift, are finding the stairs difficult and decide to move.

The film should resonate with anybody who has had to move house and especially those who have had to move because of age. But it doesn’t. It’s all so superficial that even the highly experienced Morgan Freeman and Diane Keaton can’t make it interesting.

A sick dog (on its last legs) is brought into the story in a somewhat desperate attempt to ring hearts. Cynthia Nixon has the most fun with the satire at the expense of obnoxious estate agents who think only of their commission.

RESULTS (Kaleidoscope). Are you in good shape? Do you need to work-out? Do you need a personal trainer? Are you fit enough to sit through this not very good romantic comedy triangle?

Guy Pearce (reverting to his Australian accent) runs a fitness centre and preaches health is happiness. He tries to keep his relationship with one of his staff (Cobie Smulders) professional.

Their client is a millionaire slob (Kevin Corrigan) who doesn’t know what to do with his inheritance and behaves inappropriately. Andrew Bujalski’s film isn’t either funny enough or smart enough.

WASP (Matchbox) is not, as you might think, about middle-class North American white Protestants.  It’s about two Englishmen spending a romantic holiday in France. They are joined by a friend (Elly Condron) who attempts to seduce the one who is not 100% gay (Simon Haycock).

The younger, naive man (Hugo Boulton) takes some time to see what is going on. A potential psychological thriller needs to sting. But this very low key sexual identity crisis is never waspish enough. The film, on a low budget, was filmed in director Phillipe Audi-Dor’s home in Provence and looks like it.