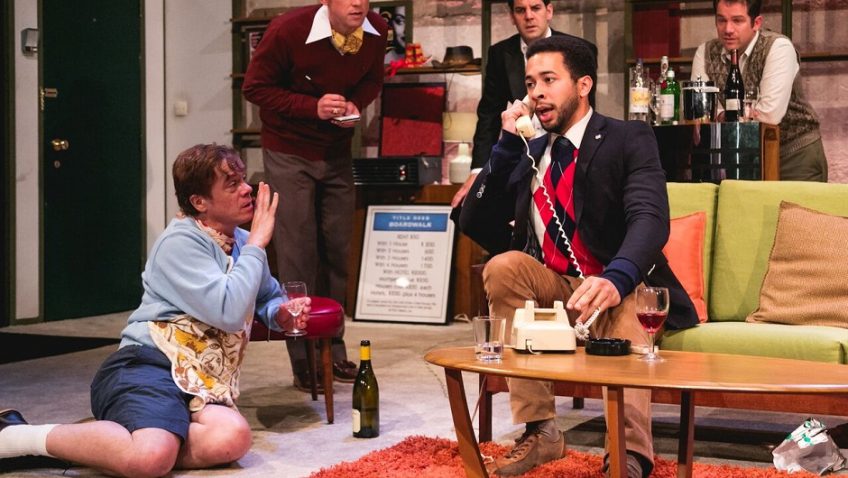 The Boys in the Band is a landmark gay play

Robert Tanitch reviews The Boys in the Band at Vaudeville Theatre, London WC2

Mart Crawley’s iconic The Boys in the Band in New York in 1967 and in London in 1968 was a landmark gay play, the first time when all the characters were openly gay. In the late 1950’s, if you had wanted to see the London premieres of Arthur Miller’s A View from the Bridge,  Robert Anderson’s Tea and Sympathy and Tennessee Williams’ Cat on a Hot Tin Roof you would have had to become a member of a theatre club

This was the only way theatre managements and theatre audiences could circumvent the Lord Chamberlain’s jurisdiction on what was permissible and what was not permissible on the British stage.

The Boys in the Band predates The Stonewall Rebellion, Gay Pride and AIDS and was a big success. The play, inevitably, no longer has the significance and shock value it once had and is now very much period piece.

The good news is that Adam Penford’s production, which was seen last year at Park Theatre and has been on a tour of the UK, has now got a West End transfer.

The production boasts a fine ensemble.

The bad news is that it is at the Vaudeville Theatre for only two weeks, so you will have to get a move-on if you want to catch it.

The characters are closet gays, promiscuous, decadent, and full of self-loathing and self-destruction. They indulge in cruel truth games involving humiliating phone calls.

Crawley’s script has a sour, bitchy, up-front wisecracking wit, much of it acted out-front to the audience.

Michael (Ian Hallard) is hosting a birthday party for his closest friend. He deliberately stirs things up and it is he who gets hurt the most when he tries to prove that a straight guy (John Hopkins), his former roommate when he was at university, is as queer as he is.

“You are,” says the closest friend (Mark Gattis), “a sad and pathetic man. You’re a homosexual and you don’t want to be. But there’s nothing you can do to change it.”

Michael bursts into tears: “Show me a happy homosexual,” he cries, “and I’ll show you a gay corpse.”

James Holmes camps it up (understatement) as the most outrageous, the most stereotypical caricature. Jack Derges’ dumb kissogram rent boy, dressed as a midnight cowboy, is the perfect gay birthday present.