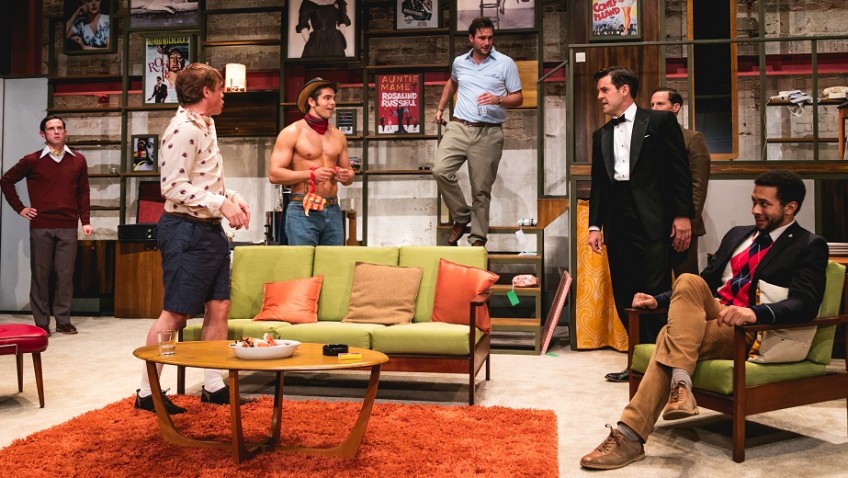 Mart Crowley’s bitchy American comedy was a landmark play for gay theatre, being the first play in which all the characters were openly homosexual. It premiered in 1968 and was enormously popular with gays and straights on both sides of the Atlantic.

Michael in New York throws a party and invites all his friends to come and celebrate a birthday. Nobody has a gay time and everyone ends up feeling sorry for himself.

Michael deliberately stirs up the trouble when he forces everybody to play a degrading truth game in which they have to phone up somebody they had loved and not told them they loved them and tell them now how much they love them.

It is a game strictly for masochists. The trouble is that you don’t believe any of the characters on stage would actually play the game.

It is Michael (Ian Hallard) who gets hurt the most when he tries so very hard to prove that his straight roommate from his college days is, deep down, as queer as he is. Mark Gattis in Boys in the Band”You are,” says another friend (Mark Gattis), “a sad and pathetic man. You’re a homosexual and you don’t want to be. But there’s nothing you can do to change it.”

Michael, filled with self-loathing, retorts: “Show me a happy homosexual and I’ll show you a gay corpse.”

The biggest laugh is the arrival of the former roommate (John Hopkins) just when they are all camping around pretending to be chorus girls doing a Broadway musical dance routine.

But, and it is another major weakness of the play, it is totally unbelievable that he would stay to be ridiculed when he could so easily go.

Meanwhile, the campest character (James Holmes), sashaying around, behaves like a stereotypical caricature of the way many people think gays behave.

The Boys in the Band, written before the advent of AIDS, is now very much a period piece, dated and overheated. Well acted in Adam Penford’s production, it arrives just in time to be a companion piece for Tony Kushner’s Angels in America, which is about to be revived at the National Theatre and which is set in the gay 1980s.

Following its London run The Boys in the Band will tour Salford, Brighton and Leeds.