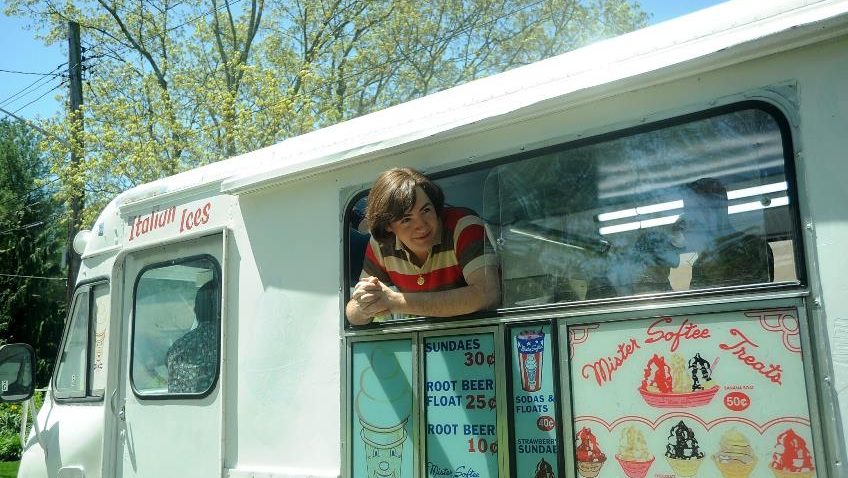 Billed as prequel to the hit television series The Sopranos and as a stand-alone film for those who just want a good gangster movie Alan Taylor’s (The Sopranos, Game of Thrones, Mad Men) The Many Saints of Newark, narrated by Christopher Moltisanti from the grave, delivers a better gangster tale than origin’s story. But Taylor has assembled a great multi-generational ensemble cast of gangsters, wives, and molls and two young Tony Sopranos in a coming-of-age story. The cast is complemented by fantastic sets, costumes, make-up and (the now expected) period songs that make 1967 Newark real even for those who have never been there. If this all sounds a lot like a would-be Goodfellas, it is an inevitable comparison.

The Many Saints of Newark has, however, a couple of trump cards down its mean streets to put those unfortunate comparisons on the back burner. The script is by Soprano’s creator and writer David Chase (with Soprano’s writer Lawrence Konner). Chase draws on his memories of growing up in the 1960s New Jersey, and puts the racial tensions that culminated in the Newark riots of 1967 at the centre of the plot.

This gives the film a contemporary resonance and another chance for the charismatic Leslie Odom Jr (One Night in Miami) to nearly steal the show as a numbers’ runner for the Italian Dickie Moltisanti with ambitions beyond his race and station. The second trump card is then 20-year-old Michael Gandolfini, as the future Tony Soprano. His job is not to bring his father, James, back to life, but to remind us that the gods visit the sins of the father upon the children. At times he does both.

In this film, the plot is driven by key relationships that revolve around Richard “Dickie” Moltisanto (Alessendro Nivola), like planets around the sun. These planets, however, are not stable and are not regulated by celestial forces. The first is between Dickie Moltisanti and Tony Soprano (William Ludwig then Michael Gandolfini). Superficially mild mannered and controlled, Dickie has a temper, that, when it snaps, usually results in someone’s instant death. But Tony, who only sees the gifts and the fun, follows Dickie around like a puppy, perhaps because his own father (Jon Bernthal) is a thick-headed psychopathic criminal who is about to return to prison, leaving his frantic wife Livia (a terrific Vera Farmiga) with the children. Livia was the 14-year-old widow of the autocrat Julius Caesar and Livia Soprano’s life is not much easier.

At the first dinner we notice that Guiseppina and Dickie keep locking eyes across the table, a situation that is hardly diffused when Hollywood Dick and his mistress move into Dickie’s house. Dickie hears too much domestic abuse to let it go and we enter into the dark realm of the Greek myths. You might also notice that with a period scarf on her hair Dickie’s wife (Gabriella Piazza) looks something like Guiseppina, which can be confusing when Dickie complains that his wife can’t have more children and a baby appears.

A third major relationship develops between Dickie and, what someone jokes at the dinner table could be Dickie’s future stepmother. Hollywood Dick Moltisanti is always eating in the film, and if you notice, Dickie, while much slimmer, does a lot of eating too.

Both have large appetites for food, women, and power. Dickie’s a chip off the old block in another way too. While Dickie is infuriated by his father’s physical (he pushes her down the stairs) and verbal (he calls her a slut) abuse of Guiseppina, we can add hypocrite to the list of his sins. The water is muddied by would-be hairdresser Guiseppina herself, who, in a questionable sub-plot, gives in to her attraction to Harold – Dickie’s happily married henchman turned archrival. If she isn’t a slut, she is tempting fate by this dangerous relationship with no future.

Another story line and relationship develop when Ray Liotta takes on a second role as an elder Moltisanti with a Zen like acceptance to his life and a newfound taste for jazz. He sees through Dickie’s offer of help and Dickie’s litany of good deeds in the community; rejects a gift because he’s given up gluten and tells a frustrated Dickie that the best thing, he can do for Tony Soprano is to stay away from him. Liotta’s stone-faced hilarity provides much needed humour to the story. Dickie, in the end, lacks the discipline to heed the advice and seals (a bit too neatly) the boy’s fate.

The third major relationship is between Dickie and his most dependable numbers’ runner, Harold. Drawn into the spirit of the Newark Riots, Harold has an epiphany of black solidarity and decides the Black, “Central” district of Newark should manage its own business. Dickie is in the dark about Harold’s plan and when he finds out, the gang violence melts into the racial tensions in the burnt-out city.

There are many terrific scenes in the film, – Tony’s revealing and touching meeting with his concerned teacher, and a subsequent attempt to have a conversation with his mother – too many to numerate. And while members of the future Soprano entourage, like Corrado “Junior” Soprano (Corey Stoll), are present, none of the relationships, apart from Dickie and Guiseppina, are sufficiently developed.

The sticking point is that as a gangster film, it is not as compelling as The Soprano’s and as an origin’s story The Many Saints of Newark is left wanting. In a wonderful scene that might bring back childhood memories, Michael highjacks a Mr Softie ice-cream van and starts a numbers racket at the door of his school, but that’s hardly the road to perdition. He’s not taking or selling drugs and reads Ivanhoe. He is a disciplined member of the football team and recognised by his teacher for his unapplied intelligence. He seems to be a thoughtful, gentle guy who could benefit from leaving his dysfunctional home for a university education. His fascination with Dickie is assumed, but not felt, and the film does not convince us that Tony’s fate is inevitable.

What we can be convinced of is that Michael Gandolfini is a star, and this is his breakthrough movie.