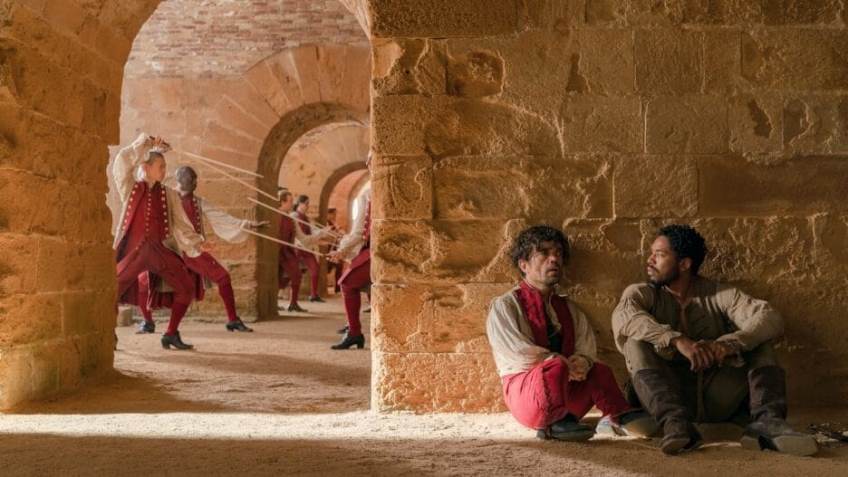 The enjoyment factor is high in Joe Wright’s Cyrano, based on Erica Schmidt’s musical stage version of Edmond Rostand’s 1897 rhymed play, set in mid-seventeenth century France. Peter Dinklage’s heroic, humorous and heart-wrenching performance as the eponymous, romantically insecure wordsmith is a treat, even for his fans from The Station Agent in 2003 to Game of Thrones. The real surprise though is Wright, directing his first musical. He might specialise in turning romantic, tragic novels into films (Tess, Anna Karenina, Atonement) with technical ability, but any emotion operates on an intellectual level and nothing in us burns. In Cyrano, Wright enfolds the audience in an uninhibited, fervent embrace.

Yet you know it’s a Joe Wright film from the start because of the puppets; a nod to his puppeteer parents. Roxanne (Haley Bennett) is the orphaned daughter of well-to- do parents, now living with her loyal, fretting housekeeper, Marie (Monica Dolan) in a section of her parents’ palace, selling off furniture for income. Although the beautiful young woman’s only hope of retaining her status is to marry, she has high standards. The tragedy is that she only discovers her priorities when it is too late.

On the way to the theatre with her suitors, The cloying Duke de Guiche (Ben Mendelsohn) who wants a trophy wife for himself or his affected friend, Valvert (Joshua James), she passes a puppet show, and Roxanne, unimpressed with either companion, sings Someone to Say. ‘I need someone to die for/Write poems and cry for/And I won’t be ashamed/I’m nobody’s pet/ No one’s wife, no one’s woman.’

A later reprise of this song brings to the fore Rostand’s theme, notably how pride, prejudice and feelings of inadequacy that we assume others share, prevent us from finding happiness. As the Duke’s party take their seats at the boisterous theatre, a handsome, new recruit to Cyrano’s regiment, Christian (Kelvin Harrison Jr), locks eyes with the smitten Roxanne before the ticketless stranger is thrown out.

The crowd is assembled to see The Great Montfleury (Mark Benton), a popular ham actor. Suddenly, with an air of authority exceeding his small stature, Cyrano (Peter Dinklage) a nobleman-soldier, famed for his wit and swordsmanship, makes an entrance like Errol Flynn to accuse Montfleury of chasing away the muse of drama. Cyrano’s humorous argument is delivered in rhyming verse, first to a disgruntled and then to a delighted crowd. With his customary panache, Cyrano tosses a bag of gold to the manager to cover the cost of the show’s cancellation.

When the Duke notices Roxanne’s delight with this upstart wordsmith, the ‘précieuse’ dandy Valvert answers Cyrano’s call for someone to defend Montfleury in a dual. Valvert hurls insults at Cyrano’s dwarfism (‘I’ll make short work of this’) but is no match for Cyrano’s quick-witted rhymed couplets, swordsmanship – or for Roxanne’s impulsive cry alerting her friend Cyrano to Valvert’s treachery.

After the theatre clears out, Cyrano shares his true feelings with his best friend, Captain Le Bret (Bashir Salahuddin) in the romantic song, Madly. Despite Le Bret’s advice to tell Roxanne how he feels, Cyrano would rather betray his heart and settle for friendship than risk being rejected outright if he confessed his love.

But a cruel irony hits Cyrano like a cannon ball when Roxanne confides in Cyrano, asking him to protect the handsome soldier in his regiment and ensure that he write her beautiful letters. Since Christian has no flair with words, Cyrano writes the letters to spare Roxanne’s disappointment. But in the magical balcony scene, under cover of dark, Cyrano uses his own voice as he climbs toward Roxanne, ultimately stepping back to let the kiss his words have inspired land on Christian’s lips.

Wright’s style, Schmidt’s musical interpretation and their leading man are not what we expect, particularly if our reference points are Jean-Paul Rappeneau’s French screen version starring Gerard Depardieu or Fred Schepisi’s 1987 version starring, and written as a comedy, by Steve Martin. There are humorous scenes in Wright’s Cyrano, but the last half hour turns to war, regret and death.

The romantic first half, with the camera lenses defused in coloured Dior stockings, is contrasted in the second half with the crisp, neo-realist scenes of war on the snow-covered slopes of Mount Etna. A spiteful Duke de Guiche has condemned Cyrano and Christian’s regiment to death in a hopeless offensive against the Spanish enemy.

If, with Cyrano, it has always been the nose, it could be because France was, in 1897, divided over the Dreyfuss affair, and overtly anti-Semitic cartoons of Jews with large noses were familiar in the press. Schmidt has a personal interest in tackling another form of repugnant, external notions of goodness and beauty. Schmidt’s entertaining script exchanges the outsider-hero’s long nose for a short stature, drawing out hidden depths and scope in her real-life husband’s acting, if not singing. The age difference between Cyrano and his Roxanne, however, persists.

The filmmakers also depart from the standard Cyrano with the dramatic location shooting in Sicily, singing (the live recording enhancing the performances) and choreographer Sidi Larbi Cherkaoui’s skillful group dance numbers. Matt Berninger and Carin Besser’s clever, articulated lyrics are functional rather than decorative, defining personalities and moving forward the action, while The National’s Bryce and Aaron Dessner’s beautiful score complements the visual poetry, without distracting from the action. If you aren’t humming the tunes after one viewing, you will after two.

When the action shifts to the doomed regimental camp in the snow covered mountains (the slopes of Mount Etna), we are treated to the moving song, When I Fall, sung by professional singers who have cameos playing soldiers facing death. A husband and father (Glen Hansard), a young man in love, (Sam Amidon), and a boy regretting his relationship with his father (Scott Folan) all ask a steward to pass on their final words. The heart-breaking song spreads to ‘Christian’s’ final letter to Roxanne. Glen Hansard, by the way, starred as the busker in the 2007 film Once, winning the Academy Award for Best Original Song for Falling Slowly.

The weak link is Kelvin Harrison Jr who neither convinces as a courageous, hunky soldier nor has the charisma he would need to earn our, or Roxanne’s passion. Seamus McGarvey, Oscar nominated for Wright’s Atonement, and Anna Karenina, should be third-time lucky for his gorgeous cinematography. His cameras become paintbrushes sweeping across the screen and reaching into tight spaces for those dazzling angles when Cyrano is ambushed on a stairwell by ten of the Duke’s thugs.