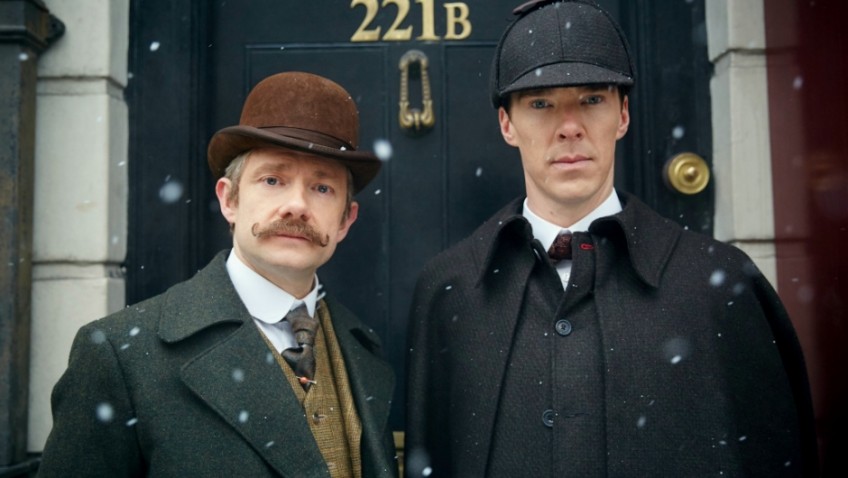 Benedict Cumberbatch wears a deerstalker for the first time!

SHERLOCK HOLMES THE ABOMINABLE BRIDE (BBC) 8.4 million watched Benedict Cumberbatch and Martin Freeman get into period costume for a bit of Victorian Gothic ghostly melodrama. A dead woman shoots her husband. “There are no ghosts!” shouts Holmes.

Suffragettes are on the rampage. Much of the action is in Holmes’s mind. The script is an ironic commentary on the TV series. The knowing banter is in good hands.

Cumberbatch has made the role his own in the same way that Basil Rathbone and Jeremy Brett made it their own in a different age. Mark Gattis makes a bloated Monty Pythonesque appearance. Andrew Scott is a very flirtatious Moriarty. (NB. The deerstalker is not in Conan Doyle’s stories. It was the invention of the illustrator and was first worn on the stage in 1899 by American actor William Gillette.)

LOVE ON THE DOLE (SONY). Walter Greenwood’s novel is about the hardships the working class suffered in the 1930s when there were no jobs and long queues at the pawnshop. The novel was made into a highly successful play.

The film (which deserves to be better known) was delayed because the censor found it sordid and did not like the police brutality it portrayed. It was released in 1941 when wartime audience, wanting something more cheerful, ignored it.

The film launched the career of Deborah Kerr who played a mill girl who decides to support herself, her father, mother and brother by becoming the mistress of a rich bookie (Frank Cellier). There are good performances by Mary Merrall as mum and Clifford Evans as a Labour activist.

HIROSHIMA MON AMOUR (StudioCanal) was landmark film in 1959. Evocatively directed by Alain Resnais with a poetic script by Marguerite Duras, it heralded the French New Wave. A Japanese architect (Eija Okada) and a French actress (Emmanuelle Riva) have a two-day affair in Hiroshima.

Two traumatic horrors had happened to them 14 years earlier.  His parents were among the 200,000 dead when the atom bomb was dropped. The film opens with some grim newsreels.

In World War 2, at the age of 18, she had fallen in love with a German soldier who was shot the day her town (Nevers) was liberated. Her hair was shaved for having collaborated with the enemy. (Riva is in her late eighties and still acting. You may have seen her in the deeply moving Amour).

FAREWELL AGAIN (StudioCanal). Tim Whelan directs a cross-section of men and women aboard a troopship. The regiment is returning to England after five years service in India when they are told they will have only six hours leave in Southampton.

There is just time to for those aboard to get married or break off an engagement or have a baby or even commit a murder before returning to duty. A mutiny is squashed before it has even begun.

The Colonel (Leslie Banks) chooses to stay with the regiment rather than his dying wife (Flora Robson). England comes first; stiff-upper-lip and all that. The propaganda went down well with audiences in 1937. The film was so popular it was re-released in World War Two.
You can buy a copy of any of these releases at discounted prices below.