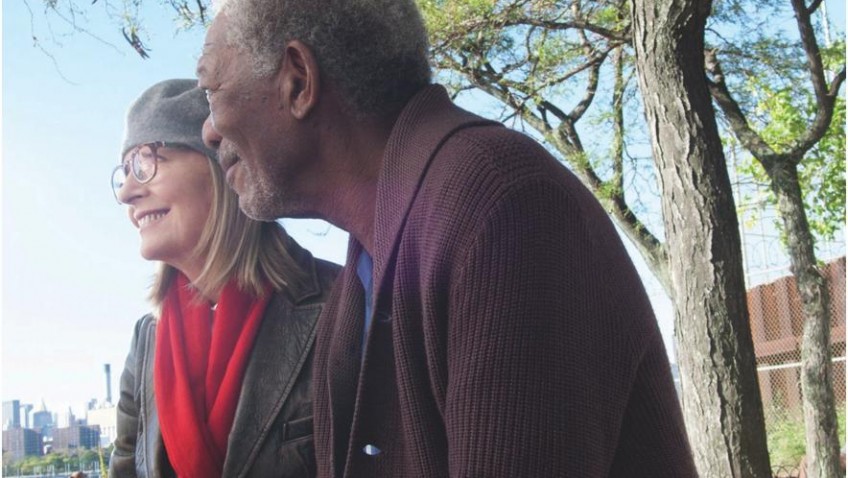 August at the movies

Joyce Glasser gives us a round up of the August movies

If Ruth & Alex, which was released at the end of July, makes it into August, it will mark the first time in film history when two English speaking films about a couple who have been married for 45 years, do not have children and do not die of cancer, Alzheimer’s or heart failure, can be seen in the same month.

Too often in films, older actors are present only to die of an age-related affliction, or by dint of their children, the real stars of the film.

In both Ruth & Alex (now playing) and 45 Years (28 August) the husband is played by a 78-year-old actor and the wife by a 69-year-old actress, eschewing the typical sexist winter/summer relationship.

While these two low-budget films are a positive development, in both cases it is the star power rather than the film as a whole that audiences will remember.

American Director Richard Loncraine’s (My House in Umbria, Wimbledon) Ruth & Alex is based on Jill Cement’s book Heroic Measures. Ruth (Diane Keaton) and Alex Carver (Morgan Freeman), a former teacher and a portrait artist respectively, are a childless, mixed race couple coming to terms with leaving the roomy Brooklyn apartment with a view of the Williamsburg Bridge that has been home for 45 years.

With both Alex and their dog Dorothy, struggling up the stairs to their apartment, Ruth’s niece Lilly, (Cynthia Nixon) a gung-ho real-estate agent, has persuaded them to move.

The open house and the sale are overshadowed by a suspected terrorist on the loose and a truck that may contain a bomb blocking traffic on the bridge. Tensions disrupt the calm routine of the Carvers’ life. Will Dorothy survive a sudden illness and operation? Will the unsettling bidding war Lilly has instigated deliver the price they need to purchase another apartment in Manhattan?

As weird strangers wander through their home, it sparks memories for Alex that are transformed into flashbacks telling us about the couple’s past.

We see how the young couple endured prejudice from their own families and disappointment when Ruth discovered she could not conceive. These hardships seem to have driven the couple closer, but have also made them rather insular and a tad smug.

Our sympathy for Ruth and Alex is eroded by their rude treatment of Lilly at the end. If scriptwriter Charlie Peters or Loncraine see Lilly as the villain, we see her as a hard working woman trying to make a living.

Keaton and Freeman might be an unlikely pairing, but their charm, warmth, understated acting, surprising chemistry, natural dialogue and the well-lived in apartment, make you believe in their marriage in a way you do not with 45 Years. A bit more focus on the race issues and why they did not adopt would not have been amiss, as the flashbacks touching on these issues help us make sense of the older couple’s feelings and lifestyle.

English co-Writer/Director Andrew Haigh pairs 69-year-old Charlotte Rampling with 78-year-old Tom Courtenay as a financially comfortable, childless, retired couple in 45 Years. As Kate Mercer (Rampling) makes the preparations for the couple’s 45th anniversary, her husband Geoff receives news that the body of his German girlfriend, Katya, has been found preserved in the ice at the site of the hiking accident where she disappeared. If Geoff is unsettled by the news to the point of acting strangely, Kate (notice the similarity in the women’s names) becomes obsessed by doubt and jealousy. When, Kate uncovers a photo of a pregnant-looking Katya, Kate begins to question the very meaning of her life.

One can only admire the controlled, understated performances from Rampling (who won the Best Actress Award at the Berlin Film Festival) and Courtenay: both, subtly revealing their vulnerability and confusion in different ways. But the film feels disingenuous – contrived to get us to the film’s emotionally-gutting climax as the camera focuses on Kate’s expressive face at the anniversary party.

Perhaps the decision to focus solely on Kate’s point of view means that we do not know enough about these characters to believe Kate’s emotional trauma. If she was happy with Geoff for 45 years, how can this buried past change that?

Unlike the lived-in flat that almost tells its own story in Michael Haneke’s Amour, or in Ruth & Alex, what we see of the Mercers’ home feels like a film set. Nor do we believe they have grown old together as we do in Ruth & Alex. As dull as the Mercer’s retirement seems, so their drab, functional conversations sound like those of a writer trying too hard to portray a close-knit couple with ordinary lives.