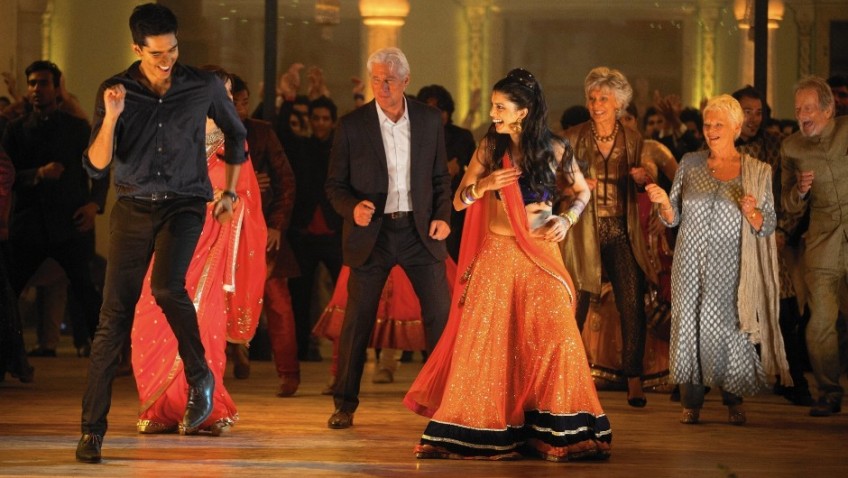 THE SECOND BEST EXOTIC MARIGOLD HOTEL (20th Century Fox). A fine ensemble of familiar faces is back in India and happy to be back.  A sequel was inevitable after the huge success of the first film. “I couldn’t resist the chance to come out and visit the old crumbling ruins,” says Penelope Wilton in the best bitchy line. Romance is blossoming. The youngsters are getting married. The oldies are getting older. How many lives do you have? How much time have you got? Will Judi Dench and Bill Nighy get their act together? Anything is possible. Maggie Smith, the hyperactive Dev Patel and Celia Imrie are joined by Richard Gere. The script may be second best; it is the actors who give the film an innocuous charm.

FORCE MAJEURE (Artificial Eye) is a Swedish film directed by Ruben Ostlund and set during a skiing holiday in the French Alps. A controlled avalanche goes wrong. Everybody panics. Husband runs away. Later he won’t admit he abandoned his wife and two young children. But how would you have reacted? How would you have behaved? The basic instinct is survival. Not everybody is a hero. The husband (Johannes Bah Kuhnke) goes though two stages: utter denial, then complete breakdown. What is his wife to do?  What would you do? Ostlund holds the interest until just before the end and then spoils it with not one but two false happy endings. The second is a totally unnecessary coda

A LETTER TO THREE WIVES (Eureka) is a 1949 woman’s picture; and there’s nothing wrong with that; because that’s exactly what it wants to be. The wives receive a letter from a woman who says one of their husbands has run off with her but she does not say which. There follows three flashbacks which show three marriages on the rocks. The script is by Joseph L Mankiewicz who also directs. Jeanne Crain, socially gauche, is married to Jeffrey Lynn. Ann Sothern is married to Kirk Douglas cast as a poor teacher who is embarrassed that his wife writes trashy scripts for radio. Linda Darnell is married to Paul Douglas and they, evenly matched, both hard as nails, have the best section. Celeste Holm who plays the other woman is never seen and is only a voice-over.

THE MAN WHO SAVED THE WORLD (Spectrum). We were never closer to war than in 1983. Lt Colonel Stanislav Petrov, of the Russian Air Defensive unit, was responsible for not starting World War 3 and killing 200 million people. His computer told him that the Americans had launched five ballistic missiles; but because he could get neither confirmation nor denial, he, contrary to protocol, did not press the button and saved the planet. The computer had had a glitch. Peter Antony’s anti-nuclear armaments documentary, mixing fact and fiction, recreates the crisis and follows Petrov’s visit to the US to address the UN and to meet actor Kevin Kostner. Petrov is portrayed in old age as an angry alcoholic widower who hates his 90-year-old mother. He is accompanied by a young female interpreter.

JONATHAN STRANGE & MR NORRELL (Acorn) is magic and fantasy plus historical fiction. Susanna Clarke’s much-admired story of two rival magicians proved to be just that bit too fantastic and strange for many TV audiences. Mr Norrell (Eddie Marsan), sober and serious, wants magic to be respectable and performed in a gentlemanly fashion. Jonathan Strange (Bertie Carvel), his extrovert protégé, wants magic to go back to its medieval roots and he does wonders for Wellington in the Peninsular Wars and during the Battle of Waterloo. The hilariously absurd 18th century wig worn by Marc Warren makes him look like a caricature by James Gillray, which isn’t necessarily a bad thing. My guess is that the series will do better on DVD than it did on TV and could well gain a cult following.