Home / LIFESTYLE / REVIEWS > / FILM REVIEWS / At 48, Salma Hayek is back in action, but Everly is unworthy of her talents. 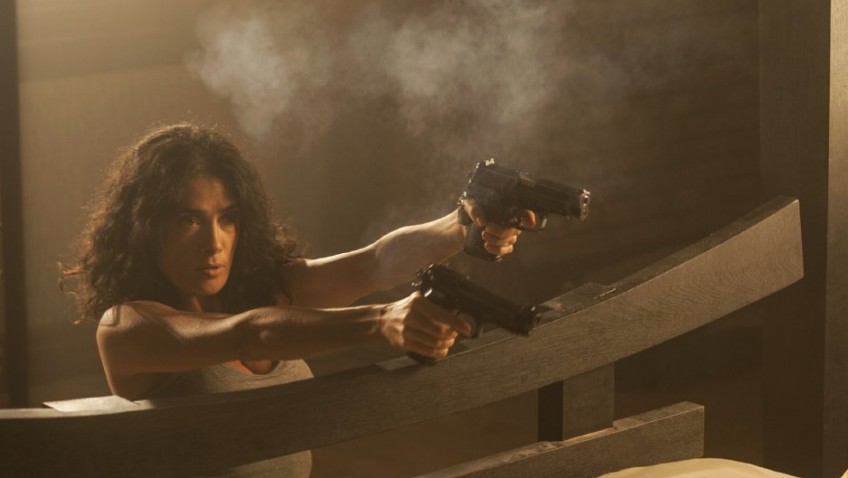 At 48, Salma Hayek is back in action, but Everly is unworthy of her talents.

The gorgeous, curvaceous Mexican bombshell Salma Hayek catapulted from Mexican soap opera star to international film star with Robert Rodriquez’s romantically choreographed shoot-out films, Desperado (1995) and From Dusk till Dawn (1996). After a couple of Golden Raspberry Awards for Worst Supporting actress, in 2002 Hayek was nominated for an Academy Award for her portrayal of the eponymous Mexican painter in Frida.

Now 48, Hayek is a high profile Producer of film and television (including the Ugly Betty series) and social activist, with one of her causes being the Avon Foundation’s Speak Out Against Domestic Violence program. Everly is nothing if not a film in which domestic violence is pushed to the extreme. In her first starring role in over a decade, Hayek suffers more abuse and picks up more guns in 93 minutes than even Robert Rodriquez could have envisaged.

Everly (Hayek), might be 40-something, but she still has what it takes to be the special mistress of the sadistic gangster Taiko (Hiroyuki Watanabe). When the film begins the relationship is on the skids because Everly has apparently started to work undercover to bring down his organised crime network. Since Taiko has ‘bought’ half the police force, he discovers her betrayal and seeks his revenge. Imprisoned in an apartment block where most of her neighbours are Taiko’s prostitutes, she is the sitting target for the gang of assassins Taiko has despatched to her door.  But the resourceful Everly deploys a gun she had hidden for such emergencies, and kills her assailants.

Enraged, Taiko has the building surrounded and unleashes a fiendish torturer, murderous prostitutes and dozens more hit men against Everly. In the meantime, he tells Everly that her actions will cost the lives of their young daughter Maisey (Aisha Ayamah) who is being brought up by Everly‘s mother (Laura Cepeda). After trying without success to leave the building and save Maisey and her mother, Everly sneaks them into her building, hoping to protect them there.

Director Joe Lynch is, like Robert Rodriquez, a director who puts style over substance, although unlike Rodriquez, the killing is so mechanical and cheesy the film seems like it is really a misguided black comedy. When the torture and family are introduced, however, it’s clear that this is neither a black comedy nor the parody it also resembles.

That said, Everly certainly summons up ghosts of films past. It is like a badly written mix of Jodie Foster’s Safe House, Park Chan-wook’s Oldboy and Gareth Huw Evans’ The Raid. These films all take place in a building under siege and, to varying degrees, also share a beleaguered protagonist who eventually turns the table on the evil people who imprison them. Unlike Everly, however, the characters in these films have some depth to them and a back story we can buy. There is also some craft applied to the violence, whether through superb displays of martial arts, a horrifying, but creative revenge strategy or even through the architecture of the house or building.

In Everly, we are left with so much slasher-type torture, inconsequential killing and wounding that there is little gratification when the revenge finally comes.  Any connection to real domestic violence evaporates long before the grenade smoke, although, for what it’s worth, Hayek, who gives the film her all, is still a sight for sore eyes.