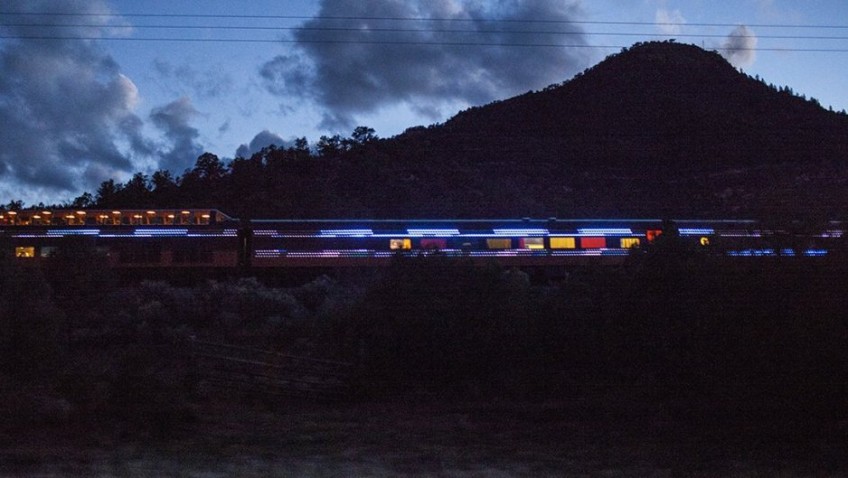 Artist Doug Aitken’s journey through modern creativity in America is novel, but not altogether successful.

If it were being shown in art galleries, Doug Aitken’s 71-minute film Station to Station might be called an Artist’s Film and Video, but, shown in cinemas, this narrative free, so-called ‘journey through modern creativity’ has to be called an experimental film. If it’s not an altogether successful experiment, it is certainly original and ambitious.

Aitkin, a creator of large electronic installations, turned a high speed train into one of his ‘architectural interventions’ as it powers its way across America, taking 62-one minute snap shots out the window at America’s artistic scene. The train stops at 10 stations where, loosely defined and generally unclear ‘happenings’ take place while on the train, musicians play, artists talk and singers sing.

While David Bowie’s 1975 album Station to Station, was directed at the Stations of the Cross, Aitken’s film plays on the American road movie tradition and the pioneer spirit heading west. If the film promises more than it delivers, it goes by in a flash.

Each of Aitken’s ‘snap shots’ lasts a minute and are continual surprises as varied as the landscape against which the artists appear. Aitken has gathered an eclectic array of talent, including musical bands/

, musicians and singers including Patti Smith, Beck, Jackson Browne, Mavis Staples, The Suicide and the Savages as well as visual artists Olafur Eliasson, Ernesto Neto, the great Ed Ruscha, and many lesser known artists. Time is the great leveller however, and there is not much we can learn about any of them in one minute. In some cases, you scramble to get the name of someone you want to hear more of. By the time you realise that Beck is performing with a gospel choir in the Mojave Desert, the train is on the move again. Italian record producer, songwriter and disc jockey Giorgio Moroder, a pioneer of electric dance music, is one of the more engaging and interesting of the 62. As Moroder, who placed the famous synthetic chord over Donna Summer’s voice in ‘I Feel Love,’ starts to give us a demonstration, we are rolling on.

While it is no mean feat synchronising 62 artists, the large majority of them are musicians while the balance are visual artists. Varied though these are, it does not feel like Aitken is taking the cultural pulse of the nation. One architect, who does not tell us much, a glimpse of a dance duo and a few photographers widen the scope of this creative survey, but we get no sense of how any of these artists reflect their times or are pushing their respective boundaries. Issues such as revenue streams for emerging artists or music streaming, Amazon (there are no authors), social media and free downloading are beyond the scope of the film.