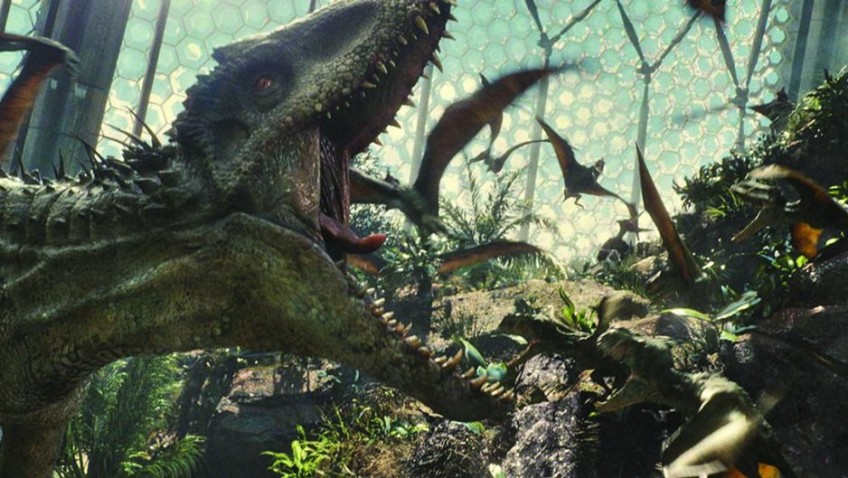 Could anything match Jurassic Park?

As the success of horror movies, suspense thrillers and roller coaster rides demonstrate, people not only like being scared, but actually pay to have experts (often backed by large corporations) scare them.

The need to drum up new ways to stimulate the public’s appetite for innovation in films and theme park thrills continues in parallel.  No one going to a theme park for an adrenalin rush imagines anything can go wrong, but in a film we demand it.  So it’s little surprise that two theme parks are in the news this week:

The unexpected tragedy of the Alton Towers Smiler ride crash and the hotly anticipated devastation at Jurassic World, a theme park where, for all the safety measures, science, big business and nature clash.

For those readers who haven’t kept up with the Jurassic franchise, Jurassic World is the fourth film in the series created by author Michael Crichton and filmmaker Steven Spielberg 22 years ago.

While Spielberg directed the 1993 Jurassic World and its 1997 sequel with the same cast, he passed on the baton for Jurassic Park III to Joe Johnston. In a surprise move, Spielberg chose Colin Trevorrow to direct (he also contributed to the script) Jurassic World on the basis of the 38-year-old Californian’s only feature film, the nerdy and ultra-low budget, ‘Safety Not Guaranteed.’

Twenty-two years after the unsuccessful first Jurassic Park on Isla Nublar (off the coast of Costa Rica) was abandoned, a new company, CEO and owner Simon Masrani (Irrfan Khan), has built a new one. It is now  fully operational as a luxury holiday resort and state-of-the-art dinosaur theme park.

Laboratory geneticist, Dr Henry Wu (B.D. Wong, the only character from any of the previous films) has completed his latest genetically modified masterpiece, the Indominus Rex, in response to Masrani’s mandate to feed the public’s demand for ‘bigger and better’ dinosaurs. Power dressing, no-nonsense and efficient Claire Dearing (Bryce Dallas Howard) is the park’s operations manager. Under her watchful eye for details, statistics, risk analysis and customer satisfaction, thousands of families are having a blast in the restaurants, petting zoo and on the scenic train ride.

The only customers who are not enjoying themselves are Claire’s estranged nephews, Zach, 16, (Nick Robinson) and Gray, 11, (Ty Simpkins). They have been shipped off to Jurassic World while their parents negotiate a divorce and entrusted to their frosty Aunt Claire by their mother (Judy Greer).

Claire, who has not seen the boys in 7 years, is preoccupied by meetings with investors and pawns off the boys to her assistant, Zara (Katie McGrath).

Masrani instructs Claire to ask Owen Grady (Chris Pratt), the expert training the Velociraptors for a future park attraction, to evaluate the Indominus Rex’s paddock for ‘vulnerability’.   The meeting between Claire and Owen at his (typically lake-side) cabin is the romantic highlight of the film. The two are face to face for the first time since a disastrous first date.  ‘Who shows up on a date with an itinerary?’

Owen throws up in a delayed most mortem, as Claire retorts that he showed up in shorts to take her to dinner. But banter fades to alarm when Owen arrives at the secluded paddock.  It seems the Indominus has not only escaped, but has used unexplained side-effects of the genetic modification and human cunning to do so.

Around this time the brothers, bored with Zara, also escape and embark on the thrilling Gyrosphere attraction.  In a two-seater glass ball, they roll through the dinosaur-packed Gallismimus Valley and then go off-piste through a rusty restricted access gate where they discover a herd of Ankylosaurs. The boys do not realise that immediately after their Gyrosphere was launched, the ride was closed under a Phase One Emergency Evacuation. When Zara tells a frantic Claire that she has lost the boys, Claire is forced to return to Owen to help her find them.   ‘You can pick up the scent of the boys, can’t you?’ she barks in panic. ‘I was in the Navy not the Navajo!’ retorts Owen in just the right dose of humourous respite.

Every film needs a bad guy, and, in addition to the Indominus, who, Grady discovers, kills for sport, we have Vic Hoskins (Vincent D’Onofrio) head of Security.  Hoskins has previously angered Owen by suggesting that the ‘raptors’ Owen is training should be used as military weapons: substitutes for troops in war zones to avoid the public outcry against high mortality rates.

When Masrani crashes into the aviary unleashing killer Pteranodons and Dimorphodons, like a prehistoric version of Hitchcock’s The Birds, Hoskins takes over in a kind of military coup. It is obvious to everyone but the filmmakers that his is one sub-plot no one would have missed.  The wonderful D’Onofrio is as miscast as his character is underwritten and unexplained.

If the film is not as gory as it should be (whatever happens to Zara, tossed around by the flying dinosaurs?), blame it on the 12 rating; and, if the 3D is totally unnecessary, blame it on the summer blockbuster marketplace.  The only people to blame for the film’s formulaic plot and relative lack of suspense are the filmmakers.

Trevorrow describes the film as ‘bigger, faster and louder’, a description that fits Masrani’s vision for Jurassic World, too.  As Claire tells investors, they are continually working on bigger and better ‘assets’ to stimulate the public’s interest every three years.

In the case of Jurassic World, it’s been 14 years; enough time to stimulate the imaginations of a new generation with an action packed dinosaur safari. Although the special effects have improved beyond recognition, for older viewers, nothing will match the thrill Jurassic Park with a story where less was more.

That said, Chris Pratt (Guardians of the Galaxy), with his beefy charm and devilish sense of humour, makes a perfect romantic hero-hunk. Long before the excellent Howard strips down to her t-shirt and loses her priggish mannerisms, the chemistry between them sizzles. Zach, impressed for the first time with his Aunt Claire, tells her: ‘Your boyfriend is a bad ass.’