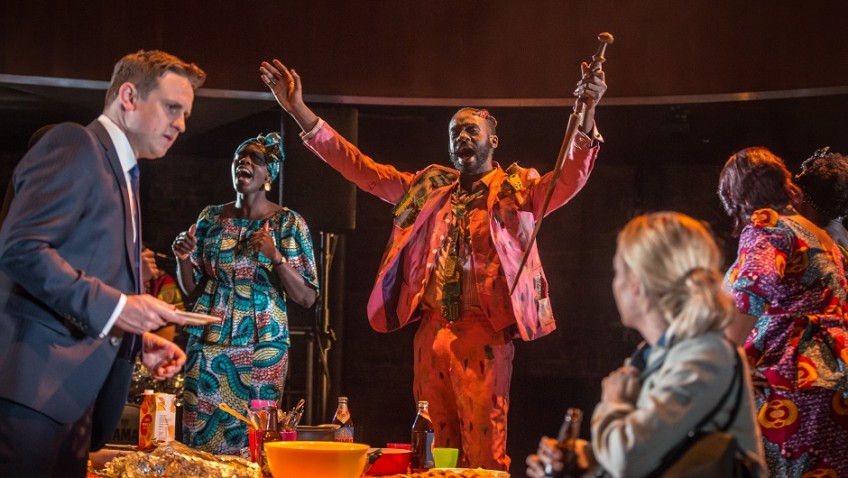 Andrew Brace’s satire is too complex for its own good

Robert Tanitch reviews They Drink It in the Congo at Almeida Theatre, London N1

Andrew Brace’s new, sprawling anarchic satire, directed by Michael Longhurst, is not the easiest play to follow. Complex would be an understatement.

Congo, with its rich source of minerals, should be rich. Instead Congo is ranked amongst the poorest.

A white middle-class Brit (Fiona Button) wants (as an act of personal atonement) to organize an Arts Festival to advertise the positive side of the nation; but she finds that even forming a committee is fraught with dangers.

She wants to get the Congolese on side but there are many factions trying to stop her because they know the Festival will be interpreted as support for the President.

She is a well meaning liberal but history, colonization and anti-government militants raise a formidable barrier. There are financial difficulties, too. Many people will feel that the money the Arts Festival is going to cost should be spent on much more urgent social problems.

The funniest comedy is a ludicrous attempt to make a propaganda video without a decent number of soldiers on screen; and trying to make up the number involves a farcical amount of trouser-changing.

The Congolese speak in English at all times, but whenever they are meant to be speaking in their own language, there are instant sur-titles in their mother tongues – a neat solution.