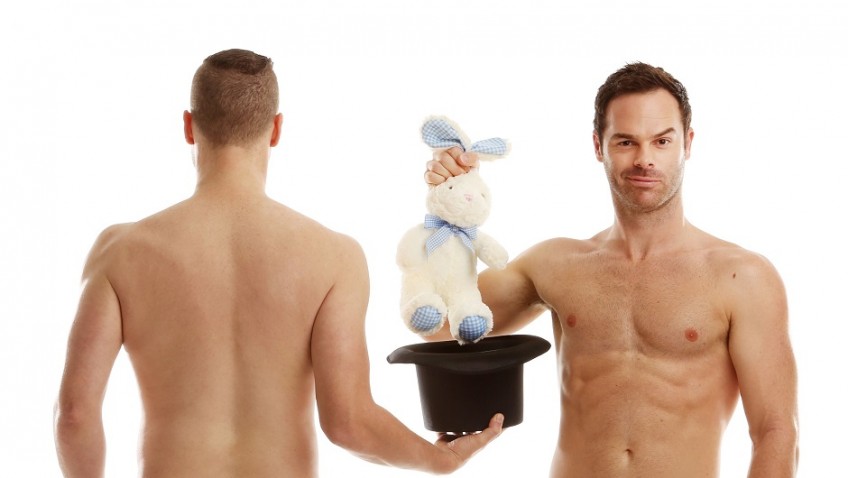 Two Aussies in the buff for your light entertainment

We all need a bit of magic in our lives, don’t we? Were you a fan of Tommy Cooper?

I have much enjoyed watching quick-change artists such as Ennio Marchetto, Arturo Brachetti and the amazing David & Diana, the latter seen on America’s Got Talent.

I should have loved to have seen Houdini. I have seen the extraordinary David Copperfield in San Francisco and Siegfried & Roy with their disappearing lions and tigers in Las Vegas.

Mike Tyler and Christopher Wayne, the two Aussies, do magic on a much smaller and much more intimate scale

The title says it all. They call themselves The Naked Magicians. So you know what to expect. The nudity is a gimmick.

Did you see The Full Monty on stage or film? If nudity offends you, don’t go.

Firstly, you have to sit though a warm-up comedian and then, just after 25 minutes, there is an unnecessary interval with loud music, making conversation very difficult.

Tyler and Wayne have been all over the world with their act. The boys, very personable, naughty but not vulgar, quickly establish a rapport with the audience and very sensibly keep the nudity under wraps until the show’s very final moments.

And even then, totally naked, totally at ease with their bodies, totally innocent, they, teasingly, modestly, discreetly, amusingly, keep a top hat strategically placed.

One of the most famous comic scenes in Shakespeare is between Titania, Queen of the Fairies, and Bully Bottom, the weaver (with ass’s head, you will remember). Their one-night fling was conveyed just with hurling paper plates and streamers in Peter Brook’s legendary production of A Midsummer Night’s Dream for the RSC in 1970.

For a joyous finale Tyler and Wayne achieve a similar mini-magical effect with an ecstatic shower of confetti. It must have taken years of rehearsal to perfect it

PS: if you don’t enjoy audience participation, don’t sit in the front row.