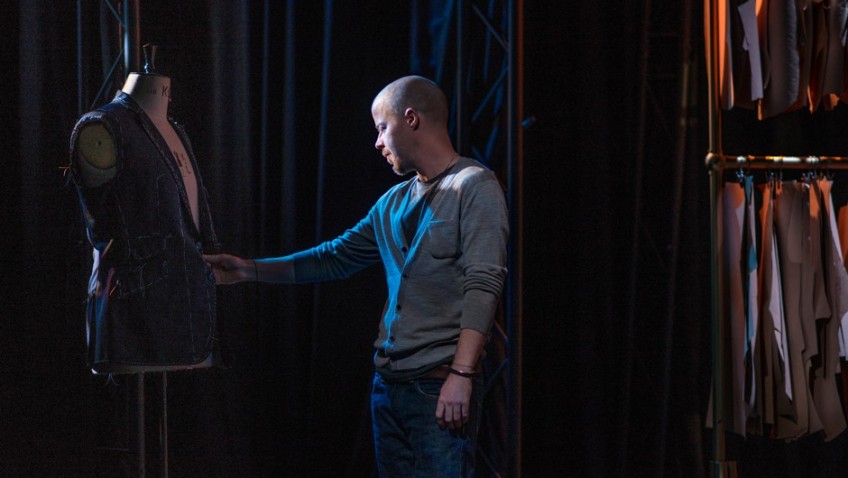 Stephen Wight impressive as the Bad Boy of Fashion

McQUEEN is described as a journey into the visionary imagination and dark dream world of Alexander McQueen.

The inspiration for James Phillips’s fictional play comes from the title of one of McQueen’s collections: The Girl Who Lived in the Tree.

A tiresome girl breaks into his Mayfair house to steal a dress. He catches her, but, instead of calling the police, they hit the town together.

In order to appreciate what is going on in John Caird’s surreal production and Christopher Marney’s surreal choreography, it would be helpful also to have seen the McQueen Exhibition at the Victoria & Albert Museum or at the very least to have watched some of McQueen’s collections and a documentary on YouTube, all of which have an overwhelming emotional impact.

Alexander McQueen, a controversial and uncompromising fashion designer, was branded the bad boy of fashion, the hooligan of fashion, the Edgar Allan Poe of Fashion. He committed suicide in 2010 at the age of 40.

He was rebellious, provocative and always outrageous. “I am not interested in being liked,” he said.

His graduation collection at Central Saint Martin’s College of Art and Design was bought in its entirety by the eccentric fashion stylist Isabella Blow, who became his patron and mentor.

McQueen was a performance artist. His collections in London and Paris were spectacular theatre and had titles such as Highland Rape, Picnic at Hanging Rock and Widows of Culloden.

His fantastic and incredible clothes are beautiful, cruel and disturbing works of art. They have a dark, stark and savage brutality

He was awarded British Designer of the Year four times. I suspect the only way you could do him justice on stage would be to reproduce the drama and shock of the actual collections with the wigs and full make-up on a catwalk.