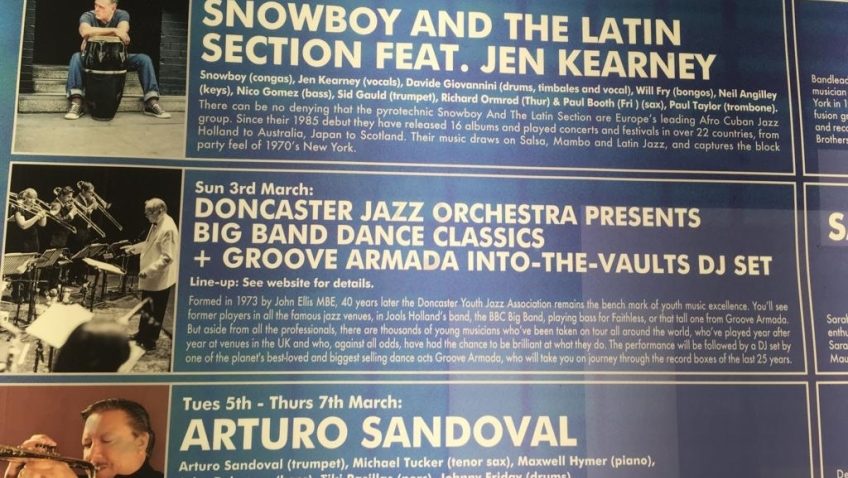 And The Music Keeps On Flowing

Times are tough for young and old alike right now, especially for musicians and entertainers, both professional and amateur. Yet somehow, even through this prolonged era of lockdowns, the irrepressible music keeps on flowing to spread its joy far and wide.

One outfit finding new ways to share their creative energies and talents in these new times is Doncaster Jazz Association and its internationally acclaimed DYJO. Founded in 1973 by the indomitable John Ellis MBE, the shows have gone on through thick and thin as young and not-quite-so-young make beautiful music together – albeit now from remote locations inside, outside, in a wheelbarrow and online on YouTube.

Doncaster Jazz Association’s colossal achievements worldwide over the past forty-eight years prove it’s not for nothing that indefatigable, ever passionate founder and conductor John Ellis was awarded an MBE; he generally has to be forcibly dragged from the stage before he allows the music to stop! Eighteen appearances at the Royal Albert Hall brought rapturous ovations; DYJO was the first ever British Jazz Orchestra to appear at the Montreux Jazz Festival; countless outstanding performance awards have been won, including BBC Radio Big Band of the Year, and they’ve had smash success at myriad festivals in Europe and the USA, including New Orleans and Los Angeles. At their United Nations gig in New York, it was said, “If I could put the Doncaster Jazz Orchestra in front of the Security Council of the United Nations, all their resolutions would be unanimous.”

Sparkling incarnations have played at Ronnie Scott’s, at the House of Commons, at The Barbican and Royal Festival Hall, with The Kaiser Chiefs, Jamiroquai, Take That, Prince, Radiohead, Coldplay and at gigs at Buckingham Palace and Windsor Castle, getting the ultimate accolade of a thumbs-up from Prince Philip on his seventieth birthday. With a mind-boggling variety of styles on offer, through swing, blues, ballads, Latin, rock, fusion and funk and all jazz masters, both ancient and modern, there’s always something exciting and outstandingly excellent for everyone.

The unflagging passion that characterizes Doncaster Jazz Association’s music flows equally passionately into education. Time and again, youngsters playing saxophones and trombones almost as big as themselves leave listeners breathless with admiration and amazement as they deliver mature solos that blow socks off for miles around: professionalism, confidence, panache, polish and passion are all engendered from day one while music talents are honed to perfection. It’s tough right now, yet they’re playing on.

The set-up is that three ongoing ensembles take the youngsters through their mighty paces, while a fourth consists of DYJO Alumni, former players who are now professional or semi-professional, dotted about the world and/or doing studio and TV work at the BBC or in the West End. Returning regularly to play gigs, they show what heady heights this superb springboard training leads to and many contribute, too, as inspiring teachers and educators for new generations.

Dennis Rollins is one such. The passionate, funky trombonist with an MBE of his own even has honorary freedom of the Borough of Doncaster, no less! As well as composing, making albums, touring and performing with his various combos like Badbone and Co, Velocity Trio and Funky-Funk, Dennis often also takes on the mantle of passionate educator to budding musicians.

Another former DYJO player is Andy Coecup. As Andy Cato he and his trombone are part of the music duo Groove Armada, one of the biggest dance hit sensations that started back in the nineties. It’s one of their big hit numbers, Superstylin’, that features on DYJO’s Lockdown YouTube video number one, arranged in very different style as a Big Band number by Stuart (Stugger) Garside, bright, fresh and uplifting, all coming together thanks to a dedicated, industrious teamwork of musicians and volunteers who share this ethos of passionate commitment to excellence. Fabulous solos flow, too, in Lockdown video 2, in an arrangement by Zak Demou of the late jazz trumpeter Roy Hargrove’s classic Strasbourg St Denis.

These little big band films showcase some of the exciting talents that continue to blossom and amaze even through difficult times, and they’re guaranteed to recharge anyone’s batteries and fill them with hope for the future!

To find out more about the DYJO click this link.