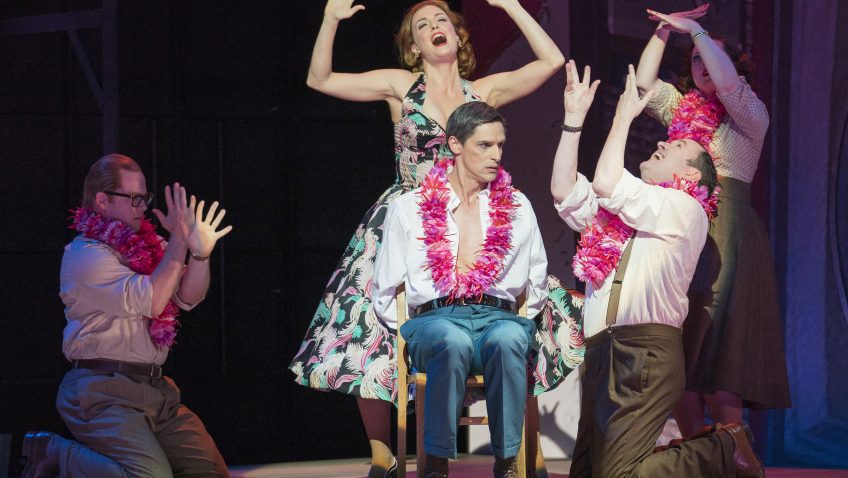 Say the name Leonard Bernstein, and the heartbreaking drama and heart-rending melodies of West Side Story spring to mind with a thrilling frisson. Nowhere near as famous as his mega-hit 1960’s musical, Trouble in Tahiti is an earlier, shorter Bernstein musical drama, set not in Tahiti but in 1950’s American suburbia.

First performed in 1952, the 50-minute one act piece satirises – good and proper – the myth of the American Dream, a dream that promotes the vision of handsome, happy couples with handsome, happy kids, all living together in perfect harmony in pretty homes with white picket fences and all mod cons; as happy, hardworking dad provides for his family and works his clever, macho way up the career ladder, his divinely lovely wife gets busy baking and homemaking non-stop, her sunny smile never waning. In truth, the reality of the idyll could be a nightmare (as in the 2008 film Revolutionary Road with Kate Winslet and DiCaprio, based on Richard Yates’ 1961 novel.) Behind closed doors things could be very different from what they might seem to outsiders. Many were living a lie.

One suburban couple, trapped in this unhappy lie, are Bernstein’s Sam and Dinah. In Opera North’s online film version, recorded at Leeds Grand Theatre in 2017, Quirijin de Lang and Wallis Giunta take the roles. Apart from a trio of harmonising narrator-commentators (a Greek Chorus of upbeat US radio jingle singers) they are the only ones to sing. Their son appears onstage but is silent, while other characters that they briefly address are just imagined. A backdrop of advertisements for shiny new kitchen appliances and a Charles Atlas body set the period nicely.

It’s perfect harmony all the way as the trio sings out the sunny details of prosperous suburban life in American Dreamland, but right from the start, Sam and Dinah lay bare the truth and darkness that hide beneath the bright facade. In duets they bicker and argue; in solos they each bewail and complain, yearning for something better, something kinder. For the most part, in both solos and duets they sing, not together, but separately and alone. Instead of communicating and interacting with one another in their duets, they each sing out mostly to themselves or to us. Frequently, one echoes the other in expressing regret over lost love and a yearning for its return, each repeating the other’s exact phrase or line one after the other.

They really want the same thing but hide even that truth from each other. Locked in separate dysfunctional worlds, each suffers alone “the screaming silence; the silent screaming”. Dinah goes alone to see Trouble in Tahiti, an escapist movie that straightway conjures up for us the romantic magic of Bali Hi from the show South Pacific that hit Broadway a few years earlier in 1949. She dismisses the silly romance as drivel yet it’s still what she longs for.

In numerous snatches, phrases and orchestrations, Bernstein’s score delivers interesting foretastes of the West Side Story to come, with busy instrumentations that sometimes end with stabbing shrieks and pauses, and then, as the pair yearn for harmony and grace and long for love to lead to a quiet place, it seems they could easily launch right there and then into There’s a Place For Us.

The message of the satire is blunt, blatant, bleak, biting and relentless, the relationship of the couple intensely serious and emotional. Welcome, regular relief to the Angst comes from the harmonic trio with their breezy, cheesy, ironic bursts and hints of humour.

It’s hoped the show will be back onstage again as soon as possible. Meanwhile, after streaming as a YouTube premiere on 2 June on OperaVision’s YouTube, Opera North’s Trouble in Tahiti will be available to watch on demand until 1 July.

Full details and how to view can be found by clicking here.

Other Opera North productions available there include Wagner’s The Ring Cycle and Britten’s The Turn of the Screw.